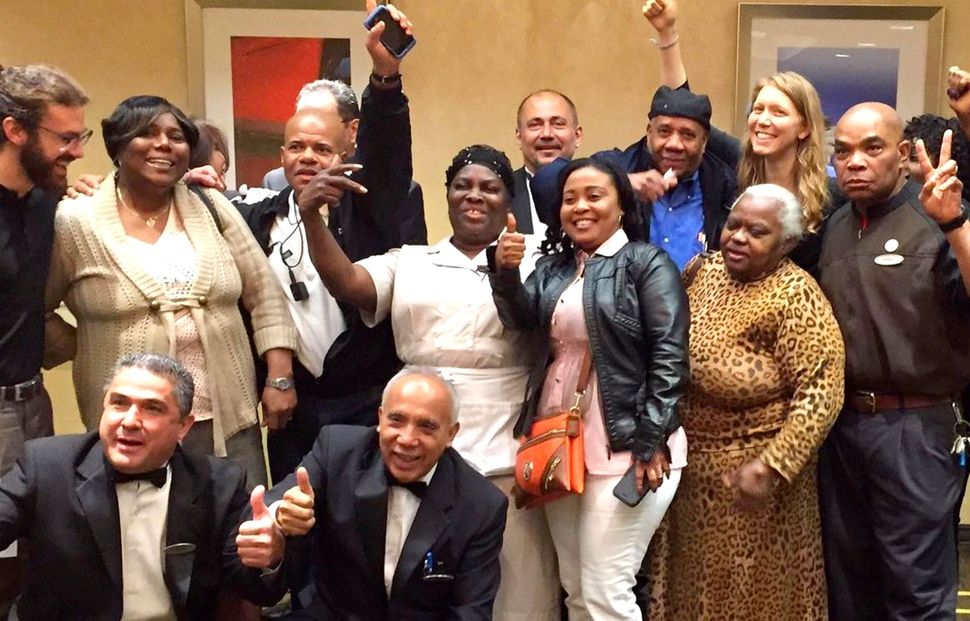 Annual weekend retreats at resorts or hotels, known as shabbatons, are staples of Jewish organizations’ calendars, where members learn, pray, strategize and bond together. It’s normal for shabbaton organizers to plan ahead to ensure their kosher needs are met, but it’s rare for them to ensure that the employees are treated fairly — much less get involved in their conflicts with management.

But such was the case at Yeshivat Hadar’s alumni shabbaton late last month in Stamford, Connecticut. The New York-based egalitarian yeshiva was a frequent customer of the Hilton Stamford Hotel & Executive Meeting Center, but stepped in when they heard that the hotel was pressuring workers not to join a union. During the heat of the unionization campaign in November — which workers eventually won in an overwhelming vote — a yeshiva rabbi marched with workers and expressed his concern with management over the way they were being treated.

And at the shabbaton itself last week, participants wore union buttons and listened to workers speak about their experiences as the workers gear up for contract negotiations.

“When the guests come and stand with the workers in the face of management, they feel like they have power,” UNITE HERE organizer Andrew Tillet-Saks told the Forward.

Hotel housekeepers, cooks, dishwashers, waiters and other workers were hoping to join the UNITE HERE union, making the Hilton the first hotel in Stamford to unionize. Workers and union organizers said that housekeepers were being made to clean 35 rooms in an eight-hour shift, a workload so high that some continued to work after they clocked out. Workers who had their hours cut still had to pay weekly for their healthcare plan, so in some cases their paycheck contained a bill they had to pay to the insurance company, not any money.

“It has been so long that we have been treated like slaves,” bellman Dominique Jean-Pierre told the Stamford Advocate. “Every year I get good reviews but the money never goes up. The housekeepers have had it very hard. They give some of the women 39 or 40 rooms to clean and they say, ‘Oh, they are Haitian; they can do it.’”

Workers said that the conditions got worse after Hilton hired a company called Atrium Hospitality to run the hotel in 2015.

“The employees used to get holiday pay. No more. They used to get raises. No more,” the union shop steward at the Hyatt Regency Hotel in Greenwich, Donald Jean-Marie, told the Advocate. “They used to get enough hours, but now the company brings in outside contractors and some of the hotel employees work only two or three days a week.”

Tillet-Saks said that after workers filed to have a union election, hotel management would bring the employees into one-on-one meetings to convince them to vote “no” — intimidating many of the female and immigrant workers.

The hotel’s director of operations, Deniz Brousseau, told the Forward that she could not go into detail about the labor dispute.

Hadar had held their alumni shabbaton at the Stamford Hilton for most of the past five years. But after learning about the unionization fight, members of Hadar’s listserv began debating whether to go if the workers called for a boycott of the hotel.

“From day 1, while workers were in the elections process, Hadarniks were saying we should boycott,” Charlie Carnow, a Hadar alum and UNITE HERE organizer, told the Forward.

Carnow and other alumni donated money to book a new hotel and make up for Hadar’s deposit. The donations were in multiples of $52.10, a reference to a responsa by former chief rabbi of Israel Ben-Zion Meir Hai Uziel about workers’ rights.

“Just listening to the video that the local union had posted to launch the organizing campaign, it was disturbing to see how they were claiming that hotel management was treating the workers,” Hadar president and CEO Rabbi Elie Kaunfer said.

After speaking with Carnow to learn more about hotel standards and the unionization process, Hadar’s president and rosh yeshiva, Rabbi Ethan Tucker, went to Stamford in late November.

Afterwards, Tucker sent an audio message to the listserv recounting his meeting with the workers at a rally outside the hotel. “I communicated to them the message that the Torah says very clearly that workers have to be treated with dignity and respect, because there is ultimately only one boss, and that is God above,” he said.

Tucker also met with hotel management. “I was there also in a capacity of a client and emphasizing that the hotel has been a wonderful and important place for us, and we’d like it to continue to be, but just as keys and Shabbat locks and kosher food are important, no less important is the way they treat their workers, and we will be watching that very closely as things went forward,” he recounted.

Kaunfer also urged alumni to call the hotel and demand that they allow the workers to organize freely without intimidation.

The workers held the vote on December 4. The tally was 110-5 in favor of unionizing.

This was only the first step for the union, however — the first contract negotiation is scheduled for February.

At the Hadar shabbaton in late January, attendees wore union solidarity pins, and two workers addressed the group before Friday night services, talking about their difficult working conditions and expressing their gratitude for Hadar’s support.

“What this reminded us is that in Jewish law and Jewish ethics, [the treatment of workers] is a critical consideration, and I hope this experience continues to motivate us to take that into account,” Kaunfer said.

This is not the first time that Jewish organizations have grappled with workers’ rights at the hotels they book. The National Federation of Temple Youth, the youth group of the Union for Reform Judaism, apologized in 2013 for booking a hotel that was subject to a UNITE HERE boycott call — but did not cancel the booking, with URJ spokesman Mark J. Pelavin saying that moving the convention would have been “impossible.” Instead, NFTY members distributed gift cards to workers as an act of “contrition.”

Carnow, the UNITE HERE worker and Hadar alum, praised how proactive Hadar was in expressing their support for the workers. “I hope other groups look at Hadar’s example,” he said, adding, “Show you’re acting according to your values, preventing your event from being ensnared in unethical behavior.”

He noted that Jewish organizations can join UNITE HERE’s Fair Hotel program, which provides information about workers’ conditions at hotels and includes a boycott list of hotels in the midst of labor disputes.

Another Hadar alum, Avi Garelick, told the Forward that the experience was an expression of Jewish values.

“One of the things I really admire about Hadar leadership, which should be simple and taken for granted but is not so much, is talking to workers directly and hearing about their experience,” he said. “All Jewish communities can learn from that kind of derekh eretz.”