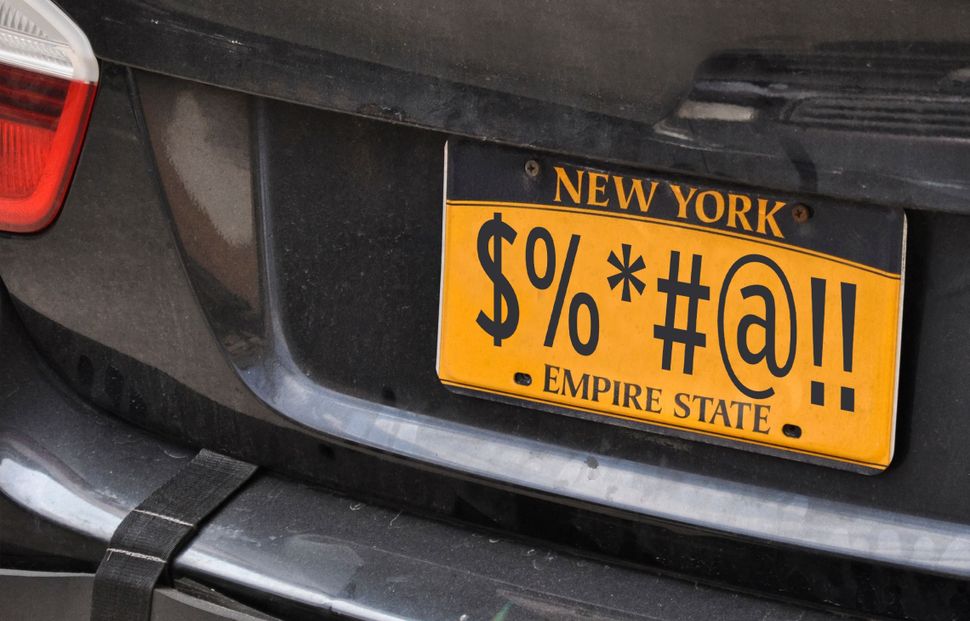 The state of New Jersey has declined to approve offensive license plates, but it greenlighted “Aryan10.” Image by Nikki Casey

Ira Stickler was driving into the Brooklyn Battery Tunnel when he blinked in disbelief. There in front of him was a New Jersey license plate that read “Aryan10.” As a Jew, Stickler was outraged to be driving behind a Nazi. As a lawyer, he decided right then and there to see if he could get that Nazi license plate off the road.

“Do they want to be seen as endorsing hateful or offensive speech which might alienate a portion of their citizens?” asked Stickler, a patent lawyer who practices in New York.

White supremacists celebrated the election of President Trump. A year into his presidency, Jewish individuals and organizations are increasingly sensitive to manifestations of Jew hatred. That puts them in the middle of a broader debate about whether the state should put any limitations on free speech, lest bigots, demagogues and aspiring tyrants exploit it to accrue excessive power or commit acts of violence.

The “Aryan10” license plate belongs to an Indian man. His son Aryan’s name is a derivation of the Sanskrit word arya, meaning noble.

“It’s just my son’s name, I got the plate when he was born,” said the owner of the “Aryan10” plate, who requested anonymity when the Forward reached him by phone.

And yes, he had to add the 10 because there are nine other “Aryan” license plates roaming around the state. New Jersey has the highest percentage of Indian residents — 3.3% — of any state in the country, according to the 2010 census.

Experts associate an increase in white supremacist sentiment and crime with Trump’s 2016 election. The ADL attributed 18 deaths to white supremacy in 2017, more than double in 2016. In August, a neo-Nazi protest against the removal of Confederate statues in Charlottesville turned violent: One woman died and 34 were injured. A growing number of politicians and public figures have ties to white supremacy, such as Paul Nehlen, who is running for Congress in Wisconsin, and Jones.

Since he got the plate nearly a decade ago, someone interpreted it as bigoted only once, the man said.

“I don’t think it’s an issue because when people see I’m Indian, they realize it can’t be what they think,” he added.

“Most people in the U.S. would assume the hateful meaning of the word,” he said. “The state should err on the side of caution.”

Of course, disagreement over the connotations of the word “aryan” is related to the debate about the swastika symbol, which has its origins in the same part of the world and was historically a symbol of good luck. The Nazis co-opted both word and image in crafting their pseudoscientific theory of a “master race.” They held that Germans were descended from the “Aryans,” whom they believed were the northern European founders of the world’s major civilizations.

Each state or city agency that issues license plates has the power to decide whether to censor offensive speech. That’s because there is no relevant federal law or court ruling on the issue.

Stickler cited a regulation that plates not be a “racial, ethnic, religious, lifestyle, or gender epithet,” when he asked the New Jersey Department of Motor Vehicles to recall the plate.

The state said “Aryan” doesn’t violate its rules, because not all its meanings are offensive.

Some of them are, however.

The Aryan Nations is a white supremacist religious organization founded by an admirer of Adolf Hitler. It hosts conferences, including one in 2014 that featured Arthur Jones, a Holocaust denier who is running for Congress in Illinois.

Even before the uptick in white supremacist rhetoric and violence, some states have chosen to recall license plates that violated their guidelines. Even New Jersey has a history of promoting politesse on the roads by declining to approve certain license plates, found an enterprising and witty reporter in Newark in 2013. He obtained the complete list of New Jersey’s banned license plates. BARFF, JEW and GETSUM all got the red light.

In 2009, Oregon recalled a plate that read NO ZOG (Zionist Occupied Government), and in 2013, a Los Angeles bus driver had his NOT SEE (Nazi) plate recalled.

And in October of last year, a Virginia man lost his appeal to keep his license plate that read “FTRUMPK.”

Virginia’s DMV commissioner said that the license plate violates state guidelines because it could be perceived as “profane, obscene or vulgar.” Virginia didn’t claim to object to the anti-Trump message, but rather to the perception that the letters F and K indicate a four-letter obscenity.

The plate owner, Donald Butler, said he bookended President Trump’s name with “F” and “K” to indicate the word “flunk,” because he believes Trump has failed the presidency.