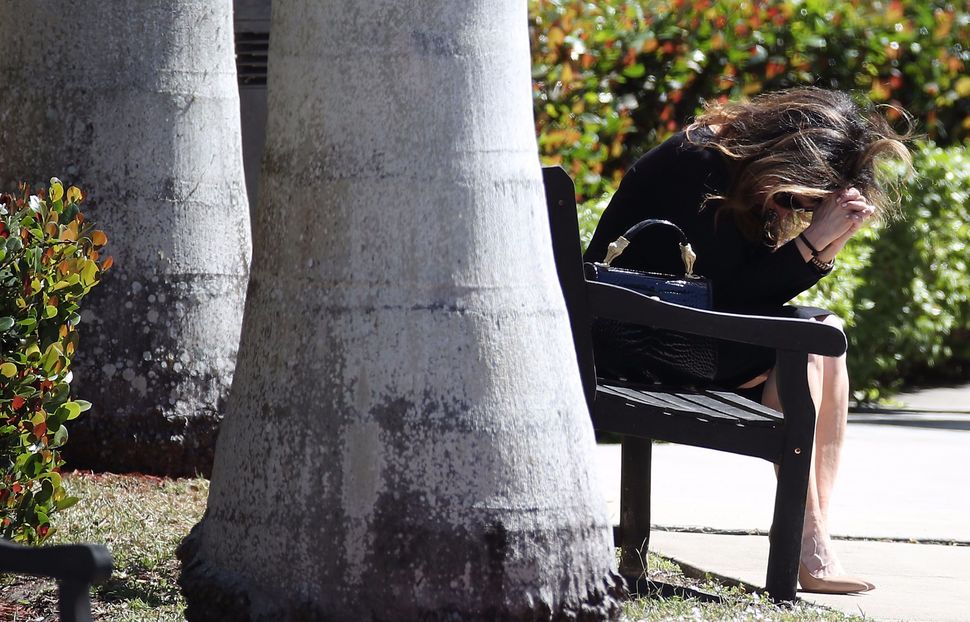 A mourner outside Meadow Pollack’s funeral. Image by Getty

Around 3 p.m. on Wednesday, February 14, Rabbi Shuey Biston received an email alert from the Broward County Sheriff’s Department: All chaplains in the area were to report to Marjory Stoneman Douglas High School. Shortly after arriving, Biston found out why.

Biston waited with parents he knew through Chabad of Parkland, where he is director of outreach, for the students who were starting to flee the building. One student who Biston is close with, David, ran up to him. Biston asked him about the two or three injured people that had been reported so far.

So began the longest week of Biston’s professional life. Working in tandem with several other community rabbis, he would spend the next several days meeting and comforting dozens of grieving parents and hundreds of relatives, students and local residents who lost a friend or several in the worst mass shooting in a U.S. school since Newtown, in 2012.

Together, the rabbis helped lay to rest four Stoneman Douglas students and one teacher. Three Parkland rabbis — Biston, Jonathan Kaplan and Bradd Boxman — spoke to the Forward for this article.

Parkland, population 31,000, is what Biston calls a “suburban utopia.” In 2017 the city was voted Florida’s safest, registering seven violent crimes for the year. Until last week’s shooting it was known for its palatial residences and access to the Everglades.

“It is that gated community, manicured lawns, beautiful parks, everyone knows everyone,” Biston said. “For us, crime is when your bicycle goes missing.”

That bubble of calm was broken open during the shooting. Each rabbi has his own story of trying to manage the chaos. They reported not sleeping, fighting to get through multiple funeral services without breaking down and leaning heavily on their families to make it through the week.

Biston remembered the afternoon of the 14th as a “blur,” moving from the school to the hospital, from the hospital to a nearby Marriott Hotel. At first he tried to find the body of Alyssa Alhadeff, a 15-year-old freshman who held part of her bat mitzvah ceremony with Chabad of Parkland. He was with the Alhadeffs at the Marriott as police officers began slowly separating the families of missing students from the families that were being reunited with survivors. They waited all afternoon for information. It was after midnight before law enforcement told them about the fate of their children.

The families — along with dozens of clergymen and Red Cross volunteers — were in the Marriott’s largest ballroom — where Chabad of Parkland typically holds High Holiday services. Hotel staff slowly partitioned a smaller part of the room, where police officers and FBI agents began to speak with parents one by one. Everyone in the ballroom could hear the “haunting, piercing screams” through the thin partitions.

“It was very very traumatic,” Biston said. “And everyone realized what was happening.”

Biston estimates he didn’t get home until four a.m. He says he wasn’t able to sleep, and by five he started receiving calls from Israeli news outlets calling for details about the shooting. He spent Friday making the arrangements for Alyssa Alhadeff’s funeral, finally collapsing that evening.

Rabbi Jonathan Kaplan is the leader of Temple Beth Chai, a synagogue that is not affiliated with any movement. He was also at the Marriott with Biston and the families, where many other rabbis from Broward County and nearby cities had gathered. Kaplan describes himself a “very emotional guy” — he says he barely made it through officiating his own daughters’ weddings.

“I’m very sensitive, and something like this comes down — I was an emotional wreck, but I had to keep it together for… these families,” he said.

Despite not having a fixed location, Beth Chai’s High Holiday services routinely draw nearly 1,000 people. (For years they have held Rosh Hashanah and Yom Kippur services in Stoneman Douglas’ auditorium.) So while Kaplan has no paid support staff and no board of directors, he still finds himself responsible for the lifecycle events of hundreds of families.

On Friday, Kaplan helped plan the funerals of Alex Schachter and Jaime Guttenberg, both 14, both of whom had recently been in Kaplan’s b’nai mitzvah class. On Saturday, Kaplan says he led a bat mitzvah ceremony before officiating at two weddings that evening. On Sunday, he led the funerals for Schachter and Guttenberg. In between, he made an appearance at the b’nai mitzvah luncheon of twins in his community. He says he tried to keep from crying at the b’nai mitzvah events and weddings, but when giving the priestly blessing to the bat mitzvah girl on Saturday he “sort of lost it.”

“There was highs and lows,” Kaplan said. “But the highs were just tearing my heart up.”

Rabbi Bradd Boxman, of Temple Kol Tikvah, Parkland’s Reform synagogue, had already faced down severe crises in his over three decades in the pulpit. He was the rabbi of a small congregation in St. Thomas when a series of unusually strong hurricanes rained down on the island in 1995. He then moved to a synagogue in Danbury, Connecticut, where several of his congregants had family or friends that died during the September 11th, 2001 attacks.

“I thought that was as bad as it gets,” Boxman said. “But there’s nothing worse than tending to the parents of children who were murdered in cold blood.”

Boxman officiated at the funeral of Meadow Pollack, who had grown up in his congregation. He says that two more of his congregants were shot and injured during the rampage.

Very few faith leaders around the country have had to confront a tragedy on a similar scale to Parkland. But Rabbi Shaul Praver, of Newtown, Connecticut, can relate to the overwhelming task of tending to dozens of grieving parents. Praver was the leader of Congregation Adath Israel, Newtown’s only synagogue, when 27 people, including 26 children, were killed at Sandy Hook Elementary in December 2012. One of the children killed was Jewish, and nearly everyone in Adath Israel knew a family that had lost a child. Praver told the New York Times in 2012 that he was trying to give the families “spiritual morphine.”

In the first hours and days after the shooting, Praver said he confronted a profound sense of disbelief, both in himself and among his congregants.

“That sense of, this is not real. This is Mickey Mouse,” he said. “And yet it is real.”

Praver added that he found it difficult to balance his own outrage over the shooting with his congregants request that the synagogue remain an “oasis of peace,” free from sermons about gun reform. (In 2015, Praver left Adath Israel after its board decided it “could not sustain a full-time rabbi’s salary.”)

Boxman has thrown himself and his congregation into advocating for immediate gun law reform. On Wednesday, he took a bus to Tallahassee to meet with politicians and protest at the state capitol. One of his meetings, he said, was a sit-down with Florida governor Rick Scott, who Boxman said “didn’t have the courage” to attend a CNN town hall with survivors of the shooting.

Boxman says he is following the lead of the many Stoneman Douglas student activists in his synagogue. And, like Praver, it’s his way of coping.

“For me it’s the only way to give meaning to these kids’ lives,” he said. “It’s in the marrow of my bones to speak truth to power.”

After the chaos of this past week and a half, the rabbis have begun to fall back into their normal routines. Kaplan and Boxman have resumed teaching b’nai mitzvah classes. The holiday of Purim begins Wednesday evening. The rabbinic cycle is re-starting — with the added weight of what they have all gone through.

“I now see myself as comforter-in-chief as well as the activist-in-chief, in addition to the regular stuff,” Boxman said. “It’s extremely draining.”

Even as the calm returns somewhat, the rabbis are finding it punctured unexpectedly here and there. Boxman says he was writing a sermon in his office when he accidentally overheard a counselling session going on next door with a woman in his community whose child was shot and killed. He heard the woman screaming, “Don’t tell me to move on! I can’t move on, I won’t move on!”

Biston said his interview with the Forward was the first chance he’d had to gather his thoughts since receiving the alert about the shooting. He said that he’s been going to events — funerals, shivah services, memorials — “every day and every night.” He is now working with the sheriff’s office to recover bits of blood and tissue left at the scene by the shooting’s Jewish victims for proper burial.

“I hope I did the best I could do. I don’t know,” Biston said. “I tried to be there for whoever was leaning on me.”

“I hope I said the right things,” he added.