How Sheriff Scott Israel Went From Hero To Lightning Rod 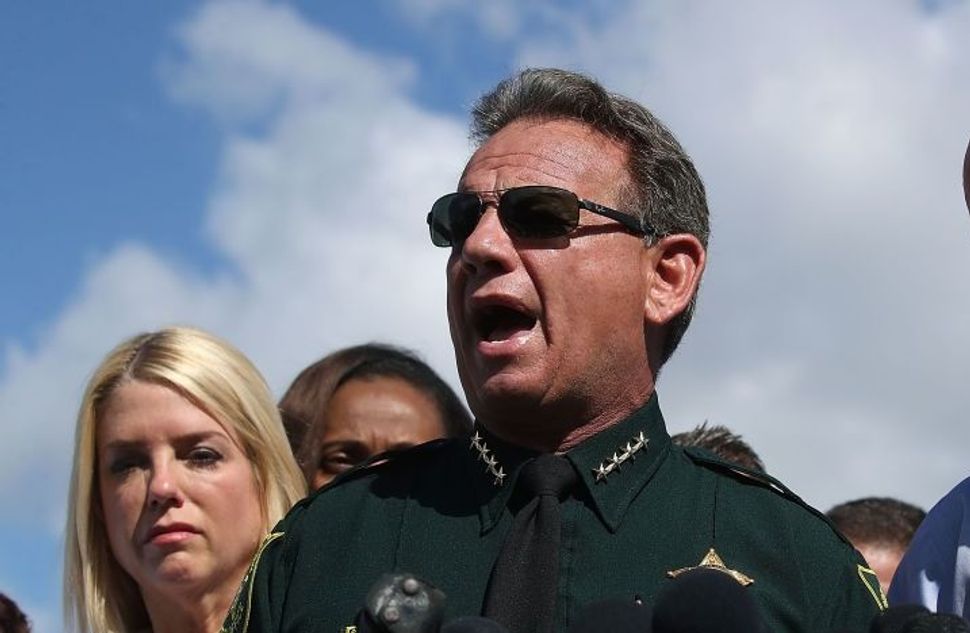 Broward County Sheriff Scott Israel emerged from the school shooting at Marjory Stoneman Douglas High School in Parkland, Florida, a hero for his passionate plea that lawmakers empower police and doctors to put people in mental hospitals on the basis of violent social media posts. The Jewish community knew him as someone who was proud both to be Jewish; he quotes the Talmud and is admired by local rabbis. Now, Israel, 61, is on the defensive as questions are raised about how he handled the shooting. Florida Gov. Rick Scott announced Sunday that the state Department of Law Enforcement would be investigating the sheriff’s office’s handling of the case.

Here’s what you need to know about Sheriff Scott Israel:

He and his department have been heavily criticized for cowardice and for missing warning signs:

The officer assigned to Stoneman Douglas, Deputy Scot Peterson, resigned after it was revealed that he waited outside the building for at least four minutes after alleged school shooter Nikolas Cruz started firing, instead of charging into the building per protocol. Israel said that he had begun initiating termination proceedings when Peterson resigned.

“We understand everything wasn’t done perfectly,” Israel said on Sunday. “Do I believe had Scot Peterson went into that building there was a chance he could have neutralized the killer and saved lives? Yes, I believe that.”

Police officers in neighboring Coral Springs told a local TV station that other Broward County Sheriff’s Office members waited outside the building after the shooting was over, even when members of other departments went in to clear the facility and evacuate injured and traumatized students. Israel said Sunday that his department planned to speak with the Coral Springs officers as part of its investigation.

Two other deputies are reportedly under investigation for failing to properly handle repeated warnings about Cruz — as many as 45, according to BuzzFeed News.

He had a personal connection to the school:

The shooting at Stoneman Douglas High School, which killed 17 people and injured dozens more, hit Israel particularly closely: Israel lived in Parkland for many years, and his triplets all attended the school; they played on the football team under coach Aaron Feis, who was killed in the shooting. It was especially shocking that the shooting took place in Parkland, which was named Florida’s safest city last year.

He is active in the Jewish community:

Israel has been open about his Jewish identity and is known to frequently quote the Bible and Talmud in official speeches. He proclaimed in a 2016 campaign flyer, “My Jewish faith is a central part of my entire life.”

“My late father, Sonny Israel, fought in the Korean War and became a police officer because he believed in the call from the Talmud that ‘Whoever saves one life saves an entire world.’ Those words guided my brother and I, as we also became police officers,” the flyer also said.

Israel said in a 2016 interview that he attends Chabad of Parkland “from time to time,” as well as other local synagogues, but he does not formally belong to any one.

Chabad of Parkland’s director of outreach and development, Rabbi Shuey Biston, told the Forward that Israel is a very visible member of the community and that he has attended Jewish community events on holidays like Yom Kippur and Hanukkah.

“Sheriff Scott Israel has been a friend to the Jewish community,” Biston said. He explained that Israel personally ensured that the medical examiner expedited the release of Jewish victims’ bodies so that they could be buried as soon as possible, per Jewish custom, and checked in with Biston to make sure everything was on track. Israel also has made visits to victims’ families who are sitting shiva, observing a week-long period of mourning.

Biston said that whenever an issue involving the Jewish community arose — from investigating anti-Semitic graffiti to ensuring that Jewish inmates have kosher food — Israel was incredibly receptive. “He calls me,” Biston said. “He doesn’t send someone to call me. He calls me…. We only have good things to say about him through our interacting with him over the years.”

Israel’s wife, Susan Israel, is Christian. Their three children were all bar mitzvahed.

In an interview with CNN on Sunday, Israel admitted that on two of those calls, “we’re not sure if our deputies did everything they could have or should have.” But he otherwise defended his department, noting that many of the calls or his officer’s inquiries did not lead to enough evidence to allow any legal arrests or detentions. (After the shooting, Israel called for a new law allowing law enforcement officers to detain citizens without a warrant for posting things on social media that could indicate future violence.)

Appearing on NBC’s “Today” on Monday, Israel was pressed on a call his department received last November that described Cruz as someone who “could be a school shooter in the making.” Israel replied that an investigation is ongoing: “What we’re looking into is did [the deputy] follow up, did he send it over… indications at this point [are] that he did not.”

A Republican state legislator has already demanded his resignation, which Israel, a Democrat, dismissed as politically biased in an interview on Sunday with CNN’s Jake Tapper. Israel defended what he called his “amazing leadership” of his department.

“Do you think that if the Broward Sheriff’s Office had done things differently, this shooting might not have happened?” Tapper asked.

“Listen, if ifs and buts were candy and nuts, O.J. Simpson would still be in the record books,” Israel responded.

“I don’t know what that means,” Tapper replied. “There’s 17 dead people, and there’s a whole long list of things your department could have been done differently.”

He is a longtime gun control advocate:

Israel has been an outspoken advocate for more gun control measures, opposing open-carry licenses and concealed weapons permits, according to the South Florida Sun-Sentinel. His official biography proclaims that Israel “also stands out in the law enforcement community for his vocal support for tougher gun control laws and the need to equip all uniformed deputies with body cameras. With this impressive record, it is no surprise Sheriff Israel is often called Florida’s most progressive and successful sheriff. Broward County is truly safer and more united as a result of his dynamic leadership.”

This is not the first time he’s been at the center of controversy:

Israel’s handling of his department has been the subject of questioning in the local media for some time. The Sun-Sentinel reported last year that the Sheriff’s Department’s internal report of its handling of a shooting at a local airport showed that the department “erred from the very beginning in controlling the shooting scene in the baggage claim area of Terminal 2, where five people died and six others were wounded.” The report claimed that the department’s malfunctioning radio system forced officers to improvise and may have led to miscommunications.

Israel has also been tied to veteran political operative Roger Stone, who has bragged of “dirty tricks” conducted for Richard Nixon and Donald Trump, among others. Stone supported Israel’s 2012 election campaign. After that, the sheriff’s office hired Stone’s co-author, publicist and longtime assistant.

How Sheriff Scott Israel Went From Hero To Lightning Rod