Will Ties To Louis Farrakhan Spur Jews To Shun The Women’s March? 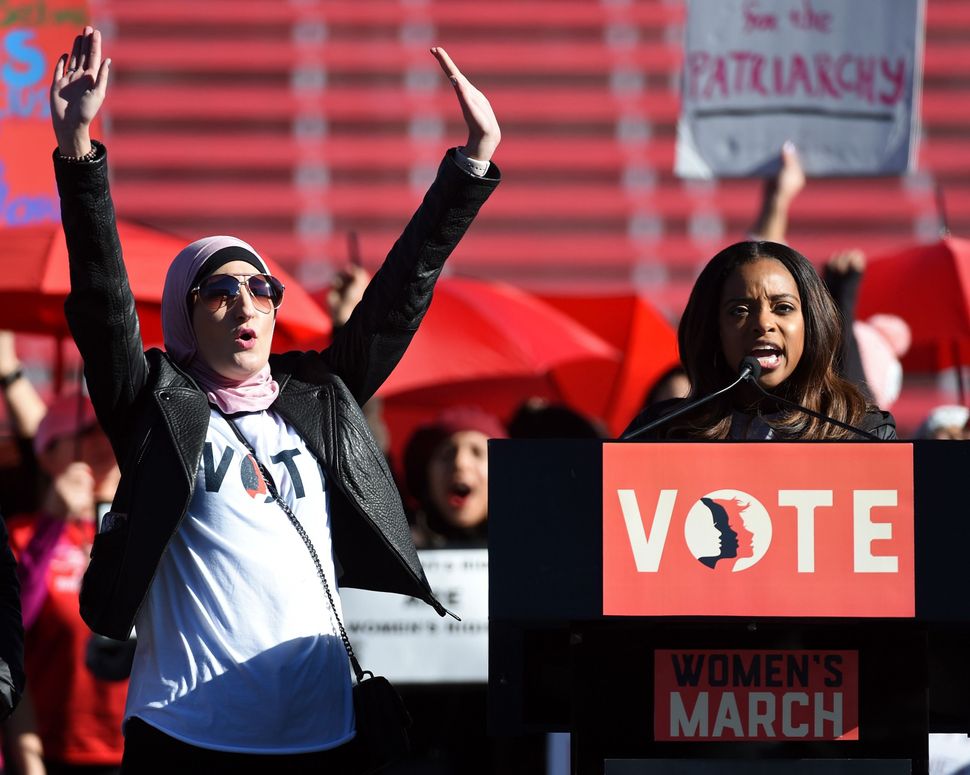 Sophie Ellman-Golan is a passionate Jew, and a passionate feminist. She’s the daughter of a rabbi, and helps run communications for the Women’s March, which organized the largest protest in American history.

She used her platform to condemn rising levels of anti-Semitism from the far right, and wrote excitedly about organizing a Shabbat service at the movement’s convention last October. That event even featured a workshop on anti-Semitism and how anti-Jewish animus has reinforced other forms of oppression.

Now, her movement is caught in a fierce debate over whether its leaders are indifferent to anti-Semitism, after it emerged that one of its co-presidents had long supported the anti-Semitic preacher Louis Farrakhan — and refuses to disavow him. Jewish feminists like Ellman-Golan say they feel disheartened and conflicted. But most refuse to reject the movement, saying its goals and ideals outweigh the negative effects of any one individual.

“I’m tired of our movements not taking antisemitism seriously,” Ellman-Golan tweeted on Saturday. “It’s not okay. It is taking a toll on me and on all Jewish people on the left. We are tired and heartbroken.”

Reports emerged late last week that one of the March’s four co-presidents, Tamika D. Mallory, had repeatedly praised and associated with Farrakhan, and has participated in his rallies as recently as last week.

Mallory, a former executive director of the Rev. Al Sharpton’s National Action Network, has promoted her appearances with Farrakhan on her social media pages several times over the years. “Thank God this man is still alive and doing well,” she once wrote on her Instagram.

Farrakhan, whom the Anti-Defamation League once called “the lead­ing anti-Semite in Amer­ica,” has been denounced for making anti-Semitic statements for decades. He previously claimed that Adolf Hitler was a “very great man” and that Jews were behind the 9/11 terrorist attacks.

Mallory refused to publicly apologize or distance herself from Farrakhan, angering many Jews who support the aims of the Women’s March. The Women’s March said in a statement that it “loves and values our sister” Mallory, but condemned anti-Semitism and stated that Farrakhan’s statements “are not aligned with the Women’s March Unity Principles.”

Most Jewish feminists said something similar.

“What [Farrakhan] said is disgusting and inexcusable,” Rabbi Jill Jacobs, executive director of T’ruah: The Rabbinic Call for Human Rights, told the Forward. But, she added, “I don’t think that one can dismiss the entire movement, and certainly not the entire progressive world, because of a statement by one person or two people.”

Organizing and campaigning for change involves working with coalitions that may have disagreements about other issues, Judy Levey, executive director of the Jewish Council on Urban Affairs, told the Forward: “People don’t always express themselves on every single issue in ways that we would be comfortable, but it’s really important that when we share values, we work together to raise up the urgent issues that we all face,” she said.

Others in the liberal Jewish community are drawing sharper lines and using harsher language as they voice their sadness and frustration.

“There is no room in a multi-faith, multi-ethnic coalitional movement for antisemitism, homophobia or transphobia. Full stop,” Rabbi Sharon Brous, who spoke at the 2017 Women’s March in Washington, wrote on Facebook. “You can’t fight racism but excuse antisemitism, just as you cannot fight antisemitism while excusing and justifying racism or Islamophobia…. In a big tent movement there has to be room for disagreement, but certain core values must stand at the forefront: the inherent dignity of every person, and an unequivocal opposition to racism or bigotry of any form.”

Mallory’s ties to Farrakhan got greater scrutiny after the Nation of Islam gave her a shout-out from the stage at an event in a Chicago stadium last month. During the speech, Farrakhan claimed that “the Jews have control over agencies of those agencies of government” like the FBI, and that they are “the mother and father of apartheid” and are responsible for “degenerate behavior in Hollywood turning men into women and women into men.”

Despite this incendiary language, Mallory promoted her presence at the speech on Instagram. Many Women’s March supporters were outraged when it was discovered, and became even more so when Mallory’s first public comments featured only defiant statements like “I am not a slave. I am a strong black woman who will not live in fear of any man or woman. You can try to take everything I have, but only GOD can have ME.”

“Empathy for each other requires that we listen, reflect, attempt to understand, and give space for nuance & complexities of the different communities we come from,” Mallory wrote. “This isn’t gonna be easy. I know that.”

She also wrote that she was “sending love” to Ellman-Golan “for her thoughtfulness and for her commitment to work together.”

“Grateful to be in this work together, and for our shared commitment to moving forward and growing together,” Ellman-Golan responded. “We can and will break the cycles that seek to keep our communities apart.”

After it emerged in August that another co-president of the Women’s March, Linda Sarsour, had also made positive statements about Farrakhan, Ellman-Golan wrote in the Forward that she and the other Women’s March leaders “do not always agree on every single issue or feel the same way about every single individual. Sometimes we say things that cause each other pain. It is painful for me to engage when people like Louis Farrakhan perpetuate the same narrative of ‘satanic global Jewry’ that Nazis do…. But we trust and respect each other — and we have faith in our shared dedication to justice and liberation.”

The Women’s Convention, an October forum that followed up on the January marches, included a workshop on anti-Semitism. By January, Ellman-Golan told the feminist website Refinery29 that she had had multiple conversations with members of the Women’s March team about anti-Semitism. In that same article, another Women’s March co-president, Carmen Perez, called the Farrakhan issue a “distraction.”

Those conversations did not seem to have dissuaded Mallory from attending Farrakhan’s speech.

As the most visible Jewish member of the Women’s March team, Ellman-Golan has been subjected to messages from Jewish supporters of the movement ranging from mournful to confused to spiteful. But despite her own anger, Ellman-Golan has defended Mallory, writing, “I’m not okay with how quick we are to discard Black women, who our movements have abused for so long,” in the same tweet in which she said Jews were heartbroken.

Other incidents in the past year have left some Jews questioning whether they are welcome in left-wing spaces. Jewish women at a gay pride march in Chicago were told to leave because their rainbow flags, which featured Stars of David, were making others uncomfortable. And Sarsour, a supporter of the anti-Israel boycott, divestment and sanctions movement, has garnered criticism by claiming that feminism and Zionism are incompatible.

Jacobs noted one benefit of these controversies: “There are more conversations about anti-Semitism among Jews and non-Jews than I’ve ever seen in my life. There’s more writing coming from the left, there’s more training, there’s more deep conversations. Anti-Semitism is thousands of years old, it’s not going to be wiped out in a year or two.”

Will Ties To Louis Farrakhan Spur Jews To Shun The Women’s March?