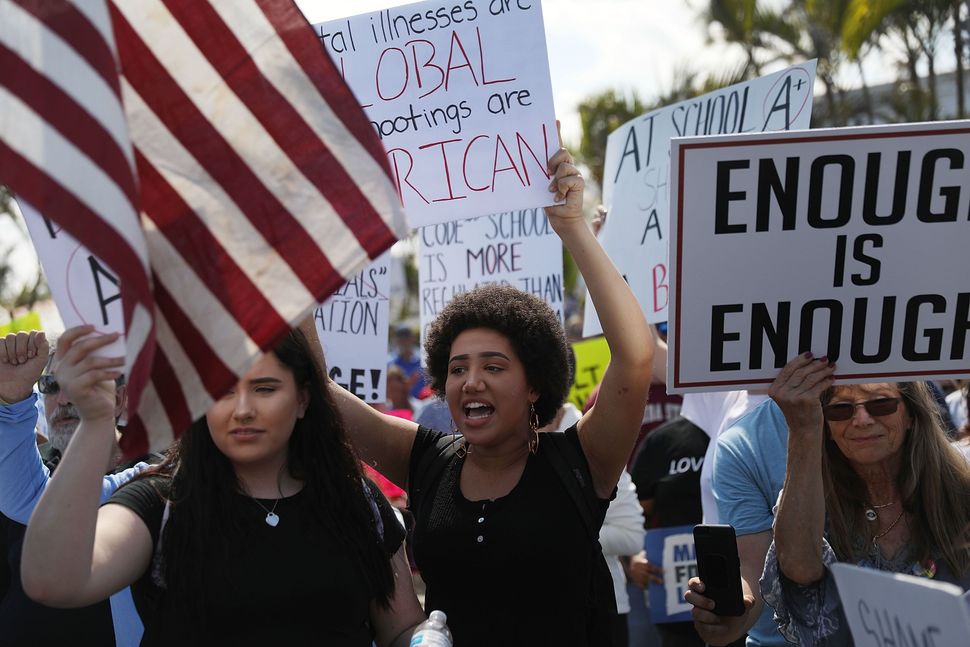 People gather as close as they can to where President Trump is residing at his Mar-a-Lago club, for a March For Our Lives event on March 24, 2018 in West Palm Beach, Florida. Image by Joe Raedle/Getty Images

More than a million Americans marched against gun violence across the country Saturday – with approximately 800,000 in Washington, D.C. alone – but the few thousand marchers here had the honor of shouting in earshot of President Trump as he seeks his usual weekend pleasures far away from life in the capital.

If Trump thought it would go unnoticed that he skipped town while the pesky kids from Parkland, about 45 minutes southeast of here, held a march in Washington to mourn their friends and teachers, he was mistaken. The March for Our Lives protest, announced by Marjory Stoneman Douglas junior Cameron Kasky four days after the devastating mass shooting at the school on Feb. 14, quickly caught on, gained generous friends in high places, and spread across the country with at least 830 sibling marches, held in all 50 states as well as on six continents. In Washington, the March for Our Lives is estimated to have been the largest gathering of young Americans since the Vietnam War.

But if Trump heard anyone directly, it would have been the student-led protesters of all ages who marched from Dreher Park to Flagler Drive, less than a mile away from his famed Mar-a-Lago resort. Police wouldn’t permit the marchers to continue over the bridge and get any closer than that. According to multiple reports, Trump’s motorcade had to seek a longer route than normal in order to avoid demonstrators as it traveled from the Trump International Golf Club to the resort where Trump frequently weekends during the cold months up north. The protesters’ path lay directly between the two Trump bases in West Palm Beach.

“He was definitely just trying to avoid us…but that’s okay. We all marched and said what we needed to say,” said Valerie Rangel, a junior at Seminole Ridge High School who organized the event here. Horrified by what happened to her fellow high schoolers in Parkland, she realized it could happen anywhere – to her school, to her or her friends. She decided to get involved as soon as she heard about the main march and the possibility of organizing local ones.

“When they announced the march in D.C., I knew we had to have a sister march here in West Palm Beach,” she said, especially since Mar-a-Lago has been dubbed the “Winter White House.” She says she had some assistance from various groups with experience holding rallies as well as some Stoneman Douglas alumni, taking in advice on how to navigate dealing with the police and working with adults to apply for a permit for a large gathering.

“Organizing was very challenging at times because I am only 17 and there were certain things that I couldn’t do alone or didn’t know how to do at all,” says Rangel.

What has happened in the five-plus weeks since a former student armed with a legally purchased AR-15 shot up the Parkland high school on Valentine’s Day, killing 17 and changing another American town forever, has surprised and inspired many, particularly as so little changed even after 20 children were killed at Sandy Hook Elementary School in 2012. But the combination of young leaders who are fired up by the momentousness of being at the forefront of a new movement and the knowledge that they are an impending voting demographic is transforming what was a gridlocked issue into something dynamic.

“Teenagers are persistent, and it’s a type of persistence that allows us to carry this movement and demand change,” Rangel explained.

Parkland shooting survivors and the victims’ parents have already managed to convince Florida lawmakers to pass legislation on gun control, including raising the minimum age to buy a gun to 21. But according to the leaders of the movement, the lawmakers get little more than a “C” because they didn’t ban assault rifles or high-capacity magazines, both which were used in the Parkland shooting. And most of them don’t think that the answer is more guns in schools, which is what Florida legislators voted for earlier this month, allocating $67 million to a new “marshal program” under which school employees — everyone but full-time classroom teachers – can be trained and armed. Although participation is officially voluntary, many gun control advocates see this as having a dangerous net result: It will put more guns into schools and put the onus on educators to be armed, rather than reducing access to guns.

Ilysia Shattuck, who works in education and volunteers with the advocacy group Moms Demand Action, was one of the many people who marched in West Palm Beach Saturday. Moms Demand Action had no official presence in Palm Beach County six weeks ago; now it has three active chapters.

“I think this march was more successful than we could have imagined. We were honored that the march organizers invited Moms to have a table in West Palm Beach and other locations,” said Shattuck, a mother of two. “People were so receptive and enthusiastic about what we’re working on, from talking to school districts about rejecting the school marshal program, which will allow armed staff in schools…to working to elect candidates with gun sense this fall.”

Almost everything about the gun issue feels a bit different after Feb. 14, and now, after March 24. It feels that way to people in many parts of America, and in places around the world where one wouldn’t expect people to simply throw their hands up at America’s seemingly intractable gun problem. And it certainly feels that way in South Florida, which, some of the marchers mused, didn’t used to be a place seen as the country’s crucible of political activism. But something new is happening here. Students are carrying signs reading “Supply schools with books not bullets,” “I will vote” and “Am I Next?” Boomers are carrying signs that read “Grandmas for Gun Control.” And more than a few people carried signs with a new message: “The NRA is a terrorist organization.”

The students say they’re just getting warmed up. Sari Kaufman, a Stoneman Douglas student survivor, addressed a crowd of thousands gathered yesterday at the Ground Zero of this movement: Pine Trails Park in Parkland, just down the road from the high school where the shooting took place.

“We have officially started our marathon,” Kaufman told the crowd, “that will last until we make a change for safer gun policies.”