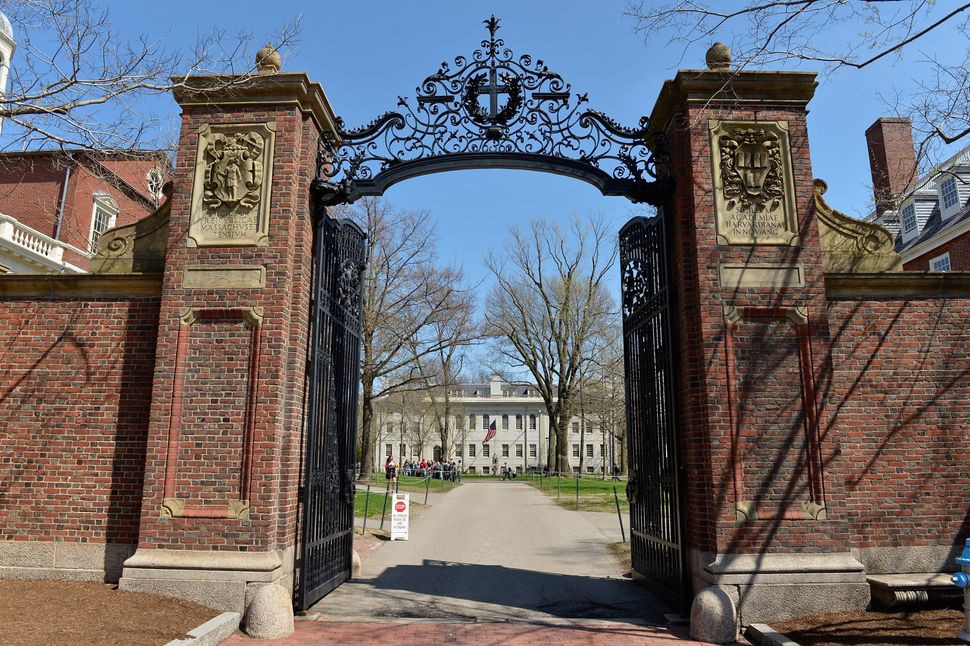 The gates of Harvard University in Cambridge, Massachusetts. Image by Paul Marotta/Getty Images

The Hillel at Harvard University is sponsoring a Seder this Passover that is aligned with a protest movement critical of Israel, a move that required the students to position the event carefully in order to hold it under Hillel’s auspices.

Scheduled for the evening of April 5, the seventh night of Passover, the festive meal is known as a “Liberation Seder.” It will protest Israel’s occupation of territories acquired since 1967.

“The scene [in the Seder] of being free in Israel is directly counter to what living in Israel looks like now for Palestinians,” Helene Lovett, one of the student organizers, told the Forward. “They’re not free. They don’t have basic human rights.”

Because Hillel International has rules regarding speech about Israel at its chapters, the students had to be scrupulous about making sure the event didn’t run afoul of those regulations in either in its language or its connection to other groups. The students did so because they acknowledge Hillel’s central role in student life.

“We made efforts to work with Hillel and make this an event that our community members feel comfortable attending,” Lovett said. “And the intention was we were working within Hillel’s standards in order to invite as many people and engage with as many people as possible within Hillel.”

The Seder will be led by students who have compiled a Haggadah, or Seder text, from multiple sources, including Jewish source sheets and testimony from Palestinian activists. Traditional staples of a Seder, like the recounting of the Exodus story and the hiding of the Afikoman, will also be included.

Still, the students had to make compromises.

“Harvard Hillel forced us to use specific language around ’67,” Lovett said, referring to the year Israel conquered the territories it now occupies after being attacked by neighboring Arab states. “We will use that framework because we want to operate with Hillel’s support. And the most important thing is bringing our community with us, and doing it within Hillel is crucial to that.”

Arab students plan to attend the event, as do Jews who feel that Hillel doesn’t represent them because they have concerns about Israeli policies and Hillel’s support for the Jewish state, said student organizer Noah Wagner.

It was inspired by IfNotNow, a self-described “movement” that protests the Israeli occupation. IfNotNow has campaigned directly against Hillel International and other Jewish educational institutions for their support for Israel and what they see as those institutions’ failure to engage with Israel’s policies towards the Palestinians.

Harvard student activists learned in January about IfNotNow’s previous “liberation Seder” events and decided they wanted to bring the idea to their campuses as a way to get Hillel to recognize the growing number of Jewish students against Israeli policies, organizer Alyssa Rubin explained.

IfNotNow has no official position on the boycott, divestment and sanctions movement, neither supporting nor denouncing it. Hillel’s “Standards of Partnership” prohibit events that support BDS, deny Israel’s right to exist or feature speakers who hold those beliefs.

“We support our students engaging with issues across a range and concerns, and the Progressive Jewish Alliance is very specific about what they’re addressing – territories acquired since 1967 and seeking a two-state solution with peace and security with Israelis and Palestinians,” the executive director of Harvard Hillel, Rabbi Jonah Steinberg, told the Forward.

Still, the possibility that the Seder could breach the Standards of Practice meant the students had to be very deliberate in designing and publicizing it.

The event is being officially held under the auspices of the school’s Progressive Jewish Alliance — not IfNotNow, the organizers say.

And while IfNotNow has staged a public campaign to ask various universities —such as the University of Massachusetts, and the University of Chicago — to hold one of these Seders and says that Harvard is the only one that is doing so, the Harvard students who are IfNotNow members say they are acting only part of the IfNotNow “movement.” It is not an organization, said Wagner and Lovett.

“We’re very proud that Harvard Hillel is really leading the way in setting an example,” Wagner said. “At other schools, students have been met with dismissal or outright refusal.”

In many cases, Rubin said, local Hillels made some efforts to work with students, but “Hillels want them to water down the language: “We want to do a social justice Seder, but not specifically an anti-Occupation Seder.”

The two sides were able to reach an agreement in part because the Progressive Jewish Alliance is already affiliated with Harvard Hillel, and thus committed to not violating its Israel standards in the Seder.

Steinberg said that Harvard Hillel supports students “engaging with Israel across a range of perspectives and concerns that’s very much like Israeli politics itself,” and noted that many Israelis share the Progressive Jewish Alliance’s concerns.

He also pointed out that the Liberation Seder is one of more than 40 that Harvard Hillel is supporting, including a Marching Band Seder.

“We’re about constructive engagement, not alienation or estrangement with Israel,” he said.

Lovett views the Seder as a first step towards a broader communal conversation about the ways in which support for Israel makes the community complicit in Palestinian suffering.

“We really would like to see our Jewish community actively join the anti-Occupation movement…just to make it explicit which side people are on, and to make it clear that we will no longer tolerate it.”