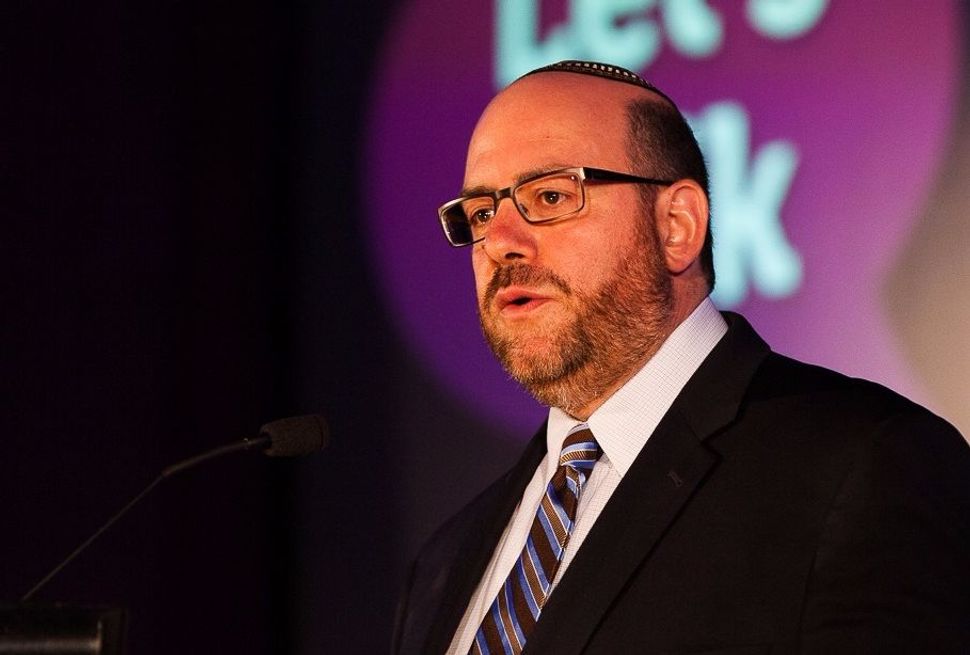 When Rabbi Steven Wernick interviewed to be chief executive of the Conservative movement’s umbrella organization in 2009, he came prepared and had “done his homework,” according to a former board officer who was present. He was then head rabbi of a synagogue in Philadelphia’s wealthy Main Line suburb. Board members were particularly impressed by how he had built up the synagogue’s youth group.

Now, nine years later, Wernick has announced his departure, and his tenure is being picked over — to mixed reviews.

As head of the United Synagogue of Conservative Judaism, Wernick has tried to combat Conservative Judaism’s many challenges by funding professional development of synagogue lay leaders and rebranding the movement. But the focus on administrative change has left many Conservative leaders wondering where the substance is.

“You have to act Jewishly when you’re a Jewish organization, and not all of our organization has done that,” said a former board member in Florida who asked not to be named so as to protect professional relationships. “Monetization has become such a primary issue that they’ve kind of forgotten what their mission is.”

Some have also questioned the timing of Wernick’s announcement, which comes amid other leadership changes for the movement. It faces big questions, such as how to address interfaith marriages, that challenge its mandate to evolve, yet stay faithful to Jewish law.

So when Wernick announced that he would not seek to renew his contract, which expires next year, it caught even some of his close colleagues by surprise, people interviewed for this article told the Forward. His counterpart at the movement’s Rabbinical Assembly, Rabbi Julie Schonfeld, had made a similar announcement just days earlier. In between, the Forward reported several rabbis are challenging the Assembly’s electoral process — something that hasn’t happened since the 1980s.

And all of this just days before Passover.

Steven Windmueller, a professor of Jewish communal service at Hebrew Union College, said Wernick’s announcement deepens the sense that Conservative Judaism faces an uphill battle. He noted that the movement’s leadership challenges are being compounded by a shrinking number of observant Conservative Jews and the movement’s wavering on “unresolved” issues like intermarriage.

One-third of all American Jews identify with the Reform movement, while less than 20% say they are Conservative, according to the 2013 Pew study of American Jews. About 10% are Orthodox, and high fertility and retention rates indicate that the Orthodox share of the population will grow. Conservative Judaism used to account for a higher percentage of Jews, though: a plurality as recently as 1990. That drop in numbers has given Conservative Judaism a reputation of a movement in decline.

Wernick told the Forward that the “convergence” of his announcement, along with Schonfeld’s announcement and the Assembly’s historic elections, was “coincidental.” Though Wernick serves in an advisory role on the Assembly’s board, he said he recused himself from conversations about Schonfeld’s contract and didn’t know she was planning to leave. He said he made the announcement this week to give the board as much time as possible to pick his successor.

By several accounts, Wernick brought a native optimism and a zeal for management strategies to the position. His tenure at the USCJ has been marked by significant organizational streamlining, from shrinking the advisory board — from 120 members to under 40 — to discontinuing outreach programs deemed too costly.

In 2013, the organization laid off 10 percent of its staff after its financial deficits sat at $3 million for two years in row. In one particularly controversial move, also in 2013, the USCJ cut funding to KOACH, its college campus network, which Wernick called a “high-impact program with minimal participation.”

Instead of youth programming, Wernick pushed professional development. One of Wernick’s signature efforts while in leadership has been the SULAM Program, a series of retreats for synagogue leaders, which one board member said is seen as a success.

“That leadership development is done with the goal of creating vibrant spiritual communities,” Wernick said. “Our assumption is that if you want to transform an institution, you have to transform the people who are leading it.”

Wernick also convinced board members to increase their contributions to the organization. But the former board member from Florida said that in doing so, Wernick created a “pay to play” system, with board members who couldn’t afford to give at desired levels being edged out and wealthier people being brought in to replace them. Ex-officio board members also lost the ability to vote on board resolutions.

That person also said that Wernick cut the outgoing board members rather unceremoniously. They were handed paper certificates at a meeting “and never heard from again.” Though the person acknowledged that the massive board that Wernick inherited was unwieldy, they felt that the process was callous.

“Don’t forget about the people that brought you to the dance,” the person said.

The person said that Wernick has tried to increase the number of women serving on the board. Currently, six of 34 voting board members are women. Three women serve as officers, including its president, Margo Gold, who has been in office since 2015.

Wernick has also been seen as trying to push the movement towards a more active consideration of its third-rail issues: observance and intermarriage. Wernick said he is “proud of the fact that we’re having the conversation.”

“Overall I think that the Conservative movement and the United Synagogue have had a substantial twist to the left, and I don’t think that is where we should be going under the circumstances,” said Franklin Kreutzer, an ex-officio USCJ board member and attorney in Miami.

The UCSJ announced Wernick’s departure Wednesday afternoon. By 8 p.m. that evening, the change had been reflected — pretty smugly — on the USCJ’s Wikipedia page. The entry called Wernick “Chief Excitement Officer,” an apparent reference to his interest in novel management strategies.

“On March 28th, 2018, it was happily announced that Rabbi Wernick would be stepping down as CEO by June 2019,” read the entry, made by an anonymous user at the University of Pennsylvania. “In response, one former USCJ board member reportedly has said: ‘that date cannot come soon enough.’”

Wernick knows he has his share of critics, though he said he had no idea who at the University of Pennsylvania might have it in for him. He added he was proud of the work that he has done while in office, and said that he has been receiving appreciative notes from people learning about his departure.

“I always feel badly if I impacted someone in a way that was negative,” Wernick said. “I try to be a mensch in everything I do.”