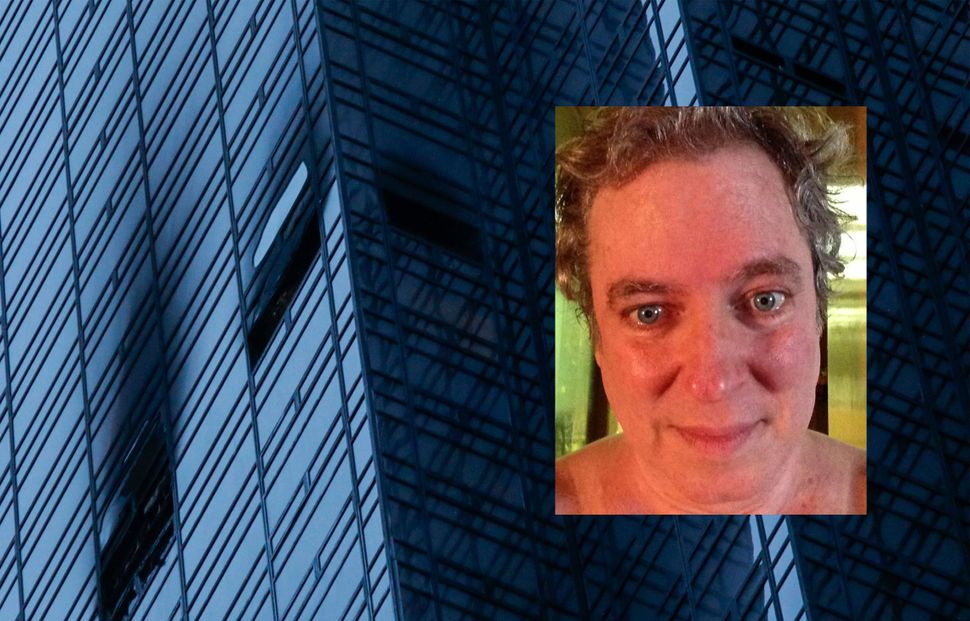 Todd Brassner died in a fire in his condo at Trump Tower. Image by Nikki Casey

After a fire in Trump Tower killed one resident on Saturday, President Trump praised the local fire department for quelling the blaze – but had nothing to say about the death of the tenant, Todd Brassner, whom he reportedly once called a “crazy Jew.”

Brassner, 67, had been a prominent dealer of art and musical instruments who’d hobnobbed with celebrities like Andy Warhol. Yet in recent years, he’d battled health and financial challenges — some directly related to Trump. Brassner hated his apartment and despaired over the Trump presidency.

“I just hope people remember him and he doesn’t become this nameless person who died in the Trump Tower fire,” his friend Rachael Cain told the Forward.

Brassner struggled with diabetes, depression and financial insolvency, and increasingly refused to leave his home on the 50th floor.

Cain said Brassner told her last month that he “was sick and he felt trapped, and he couldn’t sell the apartment.”

The values of Trump Tower condos have plummeted due to dissatisfaction both with Trump personally and with the extra security protection the building now requires. Cain said that Brassner had refused to pay his fees to the condo board and threatened to sue them in protest of the conditions at Trump Tower, which he called a “living hell.”

Brassner filed for bankruptcy in 2015. His claimed assets included the $2.5 million apartment, $400,000 in vintage guitars and a signed portrait of him by Warhol.

Brassner had reportedly had at least one run-in with Trump before the presidency that left him so despondent.

Another friend of Brassner’s, Patrick Goldsmith, told the New York Daily News that soon after Brassner bought the condo in 1996, Trump told him that Brassner was a “crazy Jew.” Brassner had already had an argument with Trump over an overflowing sink.

The Trump presidency seemed to especially affect Brassner, who often spoke about it with friends.

Brassner was not a religiously practicing Jew, but Cain said that he was “proud of his heritage,” which caused him to be very upset about Trump and his support by fascists and white nationalists.

“He was frustrated about how the world was going,” another friend, Chealsea Dawn, told the Forward, adding, “He was in the forefront of when society was art, music, creative, and now the world is watching this president.”

Cain, a musician and record label owner, said that Brassner’s health problems caused him to become “kind of a recluse.” They would talk for hours on the phone, but he wouldn’t leave his apartment to see her concerts when she visited New York.

“There were certain times lately when he felt displaced,” she explained, adding that he had told her, “A lot of my friends are gone, it’s not the same.”

Stuart Pivar, another art dealer who was close with Warhol, told The New York Times that Brassner had struggled with drugs, and that his home was so cluttered with art, instruments and other memorabilia that Brassner could barely move.

Friends prefer to think of Brassner as a larger-than-life, intelligent, generous friend. He was mentioned multiple times in Warhol’s posthumously published diaries, and said that he was present when Warhol first met the artist Jean-Michel Basquiat, a famous event in the history of modern art.

Through his obsession with Jimi Hendrix, Brassner also met and then befriended Buddy Miles, Hendrix’s drummer. They would jam together in Brassner’s apartment, and grew so close that Brassner even covered the cost of Miles’ father’s funeral.

“He and Buddy would have hours and hours of conversations…from outer space to art to a walk in the park,” said Dawn, Miles’ stepdaughter. “If you didn’t have a conversation with him, you’re missing out.” She added that she herself became friends with Brassner, praising “his brains and his depth.”

Cain also described Brassner as someone who always helped a friend when he needed a helping hand or a place to stay. He was also a dog lover and was dedicated to his pet dachshund. When the dog died, Brassner donated a set of rare prints by one of his favorite artists, the Israeli sculptor Yaacov Agam, to an animal rescue society.

Brassner’s late father Jules was also an art dealer, as is his brother Howard. Brassner would often speak fondly of his mother Edna Weissman, who is still alive at 97 and worked for years as a newspaper editor in South Florida.

“He always spoke about his mother,” Cain said. “She spoke in Yiddish, always dressed to the nines. She was a character.”

A representative of Howard Brassner’s art gallery said Monday that the family would not be making any statements to the press.

FDNY officials told the New York Post that the fire started in the bedroom and appears to be accidental.

No sprinklers were present on Brassner’s floor. Trump and other high-rise developers had successfully lobbied against being required to install sprinklers in older buildings, citing costs. A city councilman said Monday that he would introduce a bill mandating sprinklers in all apartment buildings with four or more units.

“He didn’t have to die,” Cain said, adding, “I just hope people will remember Todd favorably, and that justice will be done.”

Correction, April 11, 12:25 p.m.: An earlier version of this article stated that a crowdfunding campaign was raising money for Brassner’s funeral. In fact, funeral expenses are being covered by Brassner’s family and the crowdfunding page has been deleted.