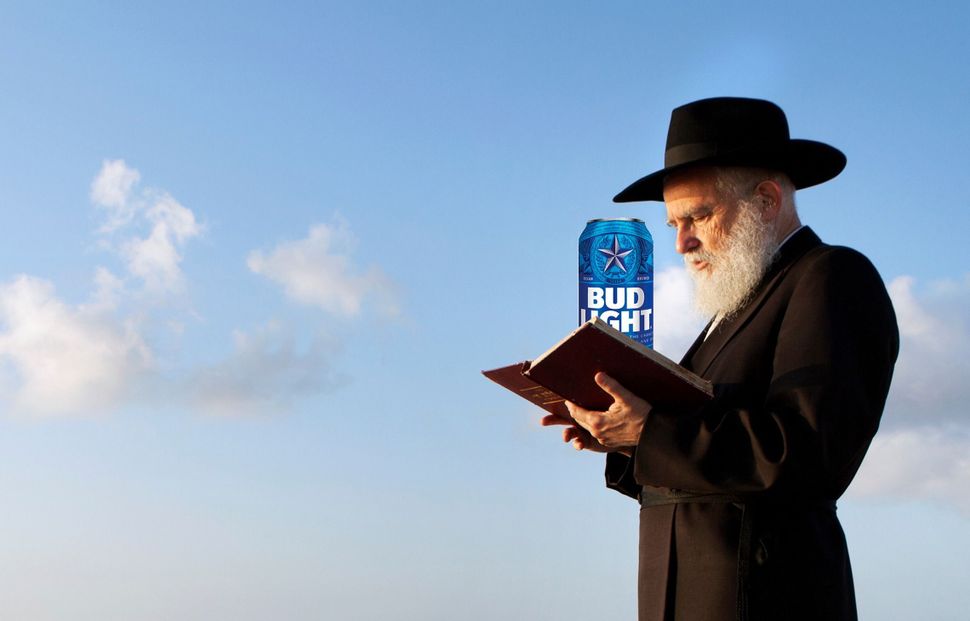 Better put down that pint of Guinness, and don’t even think about cracking a Corona. This month, some Orthodox rabbis are telling New York Jews they should stick to Budweiser — or not drink beer at all.

The unusual edict was made after the rabbis who keep watch on New York’s kosher food supply realized in the weeks before Passover that the owner of the city’s dominant beer wholesaling firm is Jewish.

That posed a problem for the rabbis, because while the New York beer magnate, Simon Bergson, is Jewish, he is not traditionally observant. Under certain complexities of Jewish law, that has led some Orthodox rabbis to rule that all the beer he owned during the week of Passover is not suitable for consumption by Jews.

Such is Bergson’s dominance of the New York City beer market that those rabbis are now advising Jews not to buy most brands of beer in New York until late May, by which point they assume Bergson’s stock will have turned over.

Budweiser, which is distributed in New York by its manufacturer and not Bergson’s firm, is among the few beers these rabbis say is permitted.

“I believe there’s quite a few thousand families that will obey … our rules,” the Satmar rabbinic administrator told the Forward.

Bergson and his company, Manhattan Beer Distributors, could not be reached for comment. They confirmed on Twitter that they had worked with one rabbi to try to resolve the issue.

The ban is a big deal in Orthodox Brooklyn. The Satmar rabbinic administrator said that the phone at his office is ringing off the hook. While Hasidic Jews generally don’t drink much beer, they are traditionally required to serve large quantities at the Shalom Zachar, an all-male party thrown on the Friday after a baby boy is born.

For new fathers scrambling to organize their parties, the ban is proving to be a massive headache, especially for those who aren’t fans of the King of Beers.

While Manhattan Beer Distributors sells much of the beer available for purchase in New York City, beverage giant Anheuser-Busch distributes its own products, meaning those who observe the ban can still drink Budweiser, Stella Artois, and Bud Light, among others.

The beer ban is based on a contested interpretation of a relatively obscure aspect of the laws of Passover, which ended last Saturday night.

During the holiday, Jews are not allowed to own leavened foods that have risen for longer than 18 minutes, a category that, for technical reasons, includes beer. In order to keep Jews from having to throw away stocks of stored food, ancient rabbis invented a legal loophole, called Mechirat Chametz, by which Jews can symbolically sell prohibited foods and then buy back at the end of the holiday.

Leavened foods owned by non-Jews during Passover are fine for Jews to eat after the holiday, hence the exception for Bud.

Food businesses owned by observant Jews regularly take advantage of the loophole, and are allowed to continue selling the banned food they owned before Passover after the holiday is over. Rabbinic authorities, however, differ on whether a Mechirat Chametz contract signed by a non-observant Jew is legitimate, especially if the Jew continues to sell banned food during the Passover holiday. Some say that leavened food owned during Passover by a Jew who doesn’t follow the laws of Passover is permanently forbidden, even if the Jew signed a Mechirat Chametz contract.

Bergson’s firm has been in the beer distribution business in New York since 1978, and has dominated the industry for decades. A child of Holocaust survivors, Bergson was born in a displaced persons camp in Austria after the Second World War, according to a profile in Crain’s New York Business. He trained his dogs to respond to commands in Yiddish.

For reasons that remain unclear, the various Kosher certification agencies realized only this year that Bergson is Jewish. In the days before Passover, some Kosher authorities scrambled to fix the Bergson problem. OK Kosher, a certification agency with ties to Chabad-Lubavitch, another Hasidic sect, visited with Bergson at his office and had him sign a Mechirat Chametz agreement. OK Kosher issued a letter on Monday saying that the agreement has been properly executed, and there was no problem with Bergson’s beer.

“The OK is surprised to see alerts posted to the contrary by those who have not contacted us and must not be aware of the details,” the agency said in the letter.

OK cited the deceased Lower East Side rabbinic figure Rabbi Moshe Feinstein, perhaps the most important 20th century rabbinic thinker in American Orthodoxy, as among the rabbis whose writings supported their position.

Yet the OK’s belief that beer Bergson’s firm owned during Passover remains acceptable for Jewish consumption appears to be in the minority among ultra-Orthodox Kosher certifications agencies. 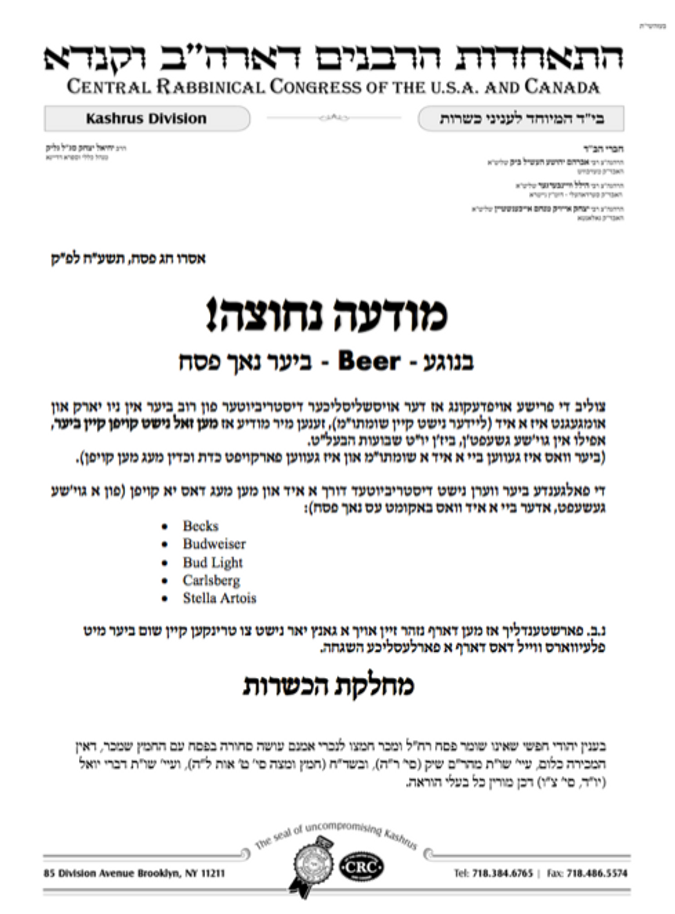 “The owner of Manhattan Beer Distributors is a Yid, and he is not Shomer Shabbes, not Shomer Mitzvos, not Shomer Torah,” said the Satmar rabbinic administrator, using Hebrew and Yiddish phrases to say that, while Bergson is Jewish, he is not a traditionally observant Jew. The CRC put out an alert, which is now posted in synagogues throughout Orthodox Brooklyn, warning that only the short list of beers not distributed by Bergson’s firm are permitted until the Jewish holiday of Shavuot, which takes place this year on May 19.

Another agency, Star-K, released an alert on Tuesday warning that the restaurants and caterers they certify in the New York area should not buy certain beer brands until late May or early June, due to the distributor being Jewish. They, too, put out a list of safe beers, including Budweiser, Becks, and Bud Light.

The Orthodox Union’s Kosher certification agency, part of the Modern Orthodox synagogue umbrella group, has not taken a position on the beer issue. Rabbi Menachem Genack, OU Kosher’s CEO, praised OK for trying to fix the problem, but said that OU policy is not to follow the teachings of Rabbi Feinstein, who OK cited, but rather Rabbi Joseph B. Soloveitchik, the central figure of Modern Orthodox Judaism, who argued that Mechirat Chametz contracts with Jews who continue to sell banned foods on Passover are not legitimate.

“I would give credit to the OK in this case,” Genack said. “It wasn’t their company or anything, they were just trying to help.”

Genack said that if his agency received an inquiry from a Kosher food consumer about the issue, they likely wouldn’t offer an opinion.

For the CRC, however, the position is clear. The Satmar rabbinic administrator said that many families would follow his organization’s directive. “People will stick to Budweiser,” he said.

Clarification: This story has been updated to clarify a legal opinion attributed to the deceased Rabbi Joseph B. Soloveitchik. An earlier version of this story reported that Soloveitchik thought that Mechirat Chametz contracts with non-observant Jews were illegitimate; in fact, he argued against the legitimacy of such contracts with Jews who sell chametz on Passover.