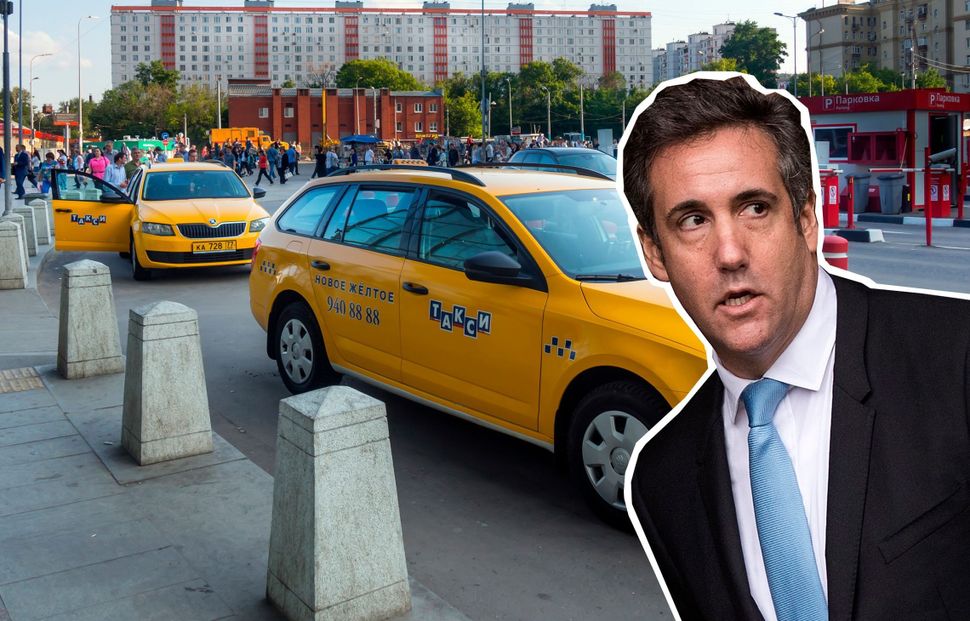 The story Michael Cohen and President Trump usually tell about how they met focuses on real estate, about glitz and glamour and great views. Cohen says he started buying apartments in Trump World Tower in 2001. Trump says Cohen’s choice of investments shows he’s a smart man and hires him.

But another, grittier business may have also played a big role in bringing them together: taxis. That Cohen owns taxi licenses is not news, but the Forward has learned that he may have owned taxis in Russia as well as New York and Chicago.

Even after Cohen started working for Trump in 2006, he boasted that most of his money came from his Russia cab business — not from his job with the Trump Organization, according to two people who were at the same holiday party in the New York area suburbs with the lawyer in 2008, with about 50 other people.

“As soon as Trump won I thought, ‘This guy has mob ties — a Russian connection,’” said one source who was at the party and declined to go on the record for fear of reprisals from the lawyer.

Trump wheeled and dealed on Vladimir Putin’s turf for a decade, but his activities there may now have come back to haunt him in the form of special counsel Robert Mueller’s federal investigation of possible collusion between the president’s campaign and Russia.

Indeed, some of Cohen’s Russian contacts may have in fact been “organized crime figures,” Fusion GPS co-founder Glenn Simpson testified before Congress late in 2017, about 11 months after his partner Christopher Steele’s bombshell dossier was published by BuzzFeed. The report, according to this transcript of his testimony, laid out the extent of Trump’s potential connections to the Kremlin that could compromise his presidency.

Cohen “was first bragging about medallions in New York City and then said, ‘but the real money is in the cabs in Russia,’” according to another source at that 2008 party. “He seemed dirty. He seemed sleazy. It stuck with me all this time.”

Cohen started to acquire cab licenses in the U.S. in the late 1990s after marrying Soviet emigre Laura Shusterman, whose father, Fima Shusterman, was already in the cab business and had pleaded guilty to defrauding the IRS, according to reports as well as state and federal records. Federal investigators told a Rolling Stone reporter that Cohen met Trump through an introduction by Shusterman.

Cohen’s lawyer, Stephen Ryan, said he was not answering media questions when reached by phone the evening of April 19. He also did not return a second call for comment regarding Cohen’s possible Russian taxi holdings made on April 24.

The president’s business ventures in Russia also seemed to flourish as the years went on, with Trump hosting the Miss Universe 2013 pageant in a suburb of Moscow and Cohen reaching out to the Kremlin for help with building a tower in Moscow, though that project never got off the ground.

It was in these worlds, including his cab dealings, that Cohen met and did business with shady figures, Simpson testified in the Capitol Building on November 14, 2017, adding that the lawyer “had a lot of connections to the former Soviet Union, and that he seemed to have associations with organized crime figures in New York and Florida, Russian organized crime figures.”

Cohen also owned part of a Brooklyn social club run by his uncle that was once used as a meeting place for Russian mobsters, according to Rolling Stone and Talking Points Memo.

When asked who those Russian mob connections were, Simpson said he couldn’t “remember a lot of names,” but mentioned Cohen’s taxi dealing with Russian Jewish cab impresarios Simon Garber and Evgeny “Taxi King” Freidman — though neither man has ever officially been charged with being part of an organized crime family.

By 2003, Cohen controlled a fleet of more than 200 cabs, according to a bio from his failed New York City Council bid that year, and had started to conduct his legal practice out of Garber’s headquarters on 43rd Avenue in Long Island City.

Garber was a colorful personality in the business, who controlled fleets in New York, Chicago and Moscow, and played polo on the weekends, according to reports and a 2013 press release by the owner. But he also started to run into legal troubles.

He was busted in 2008 in Colts Neck, New Jersey after walking into a stranger’s home and taking a shower, the New York Observer reported.

Garber was then forced to pay back drivers more than $1.3 million after the New York State Attorney General charged him in 2014 with ripping them off.

Meanwhile in Chicago, he was fined $1 million after the Sun Times exposed his fleet included wrecked or salvaged cars from other states.

Cohen and Garber reportedly had their own acrimonious split in 2012 over a contract dispute. By the time Garber and Cohen parted ways, Cohen had already been working for Trump for six years, and his medallion holdings dwindled to just over 30.

In the late 2000s, Cohen started to use his Trump Organization email address to conduct what remained of his taxi business, the Forward has reported, records of which were seized by the FBI in their raids on Cohen’s office, home and apartment.

Those medallions were then reportedly managed by Freidman until last spring, when he was busted for stealing nearly $5 million in MTA surcharges, according to the New York State Attorney General’s office.

“The ‘Taxi King’ built his empire by stealing from New Yorkers – pocketing money that should have instead been invested in our transportation system,” Attorney General Eric Schneiderman said in a statement after his indictment. “No one is above the law, and my office will use every tool available to hold accountable those who cheat the system.”

Workers at Garber’s windowless brick headquarters, which has a framed picture of the late Rabbi Menachem Mendel Schneerson, said on April 18 that they did not know Cohen and that the owner was not in his office. Garber did not return a request for comment. A worker who answered the phone at a cab company Freidman runs said he was Europe for a trip and could not be reached.

Cohen also reportedly owns more than two dozen cabs in Chicago. Shusterman, his father-in-law loaned $20 million to a cab mogul in the city, Yasya Shtayner, who manages the Cohen’s taxis. Shtayner was named in the search warrants the FBI used to raid Cohen’s homes and office.