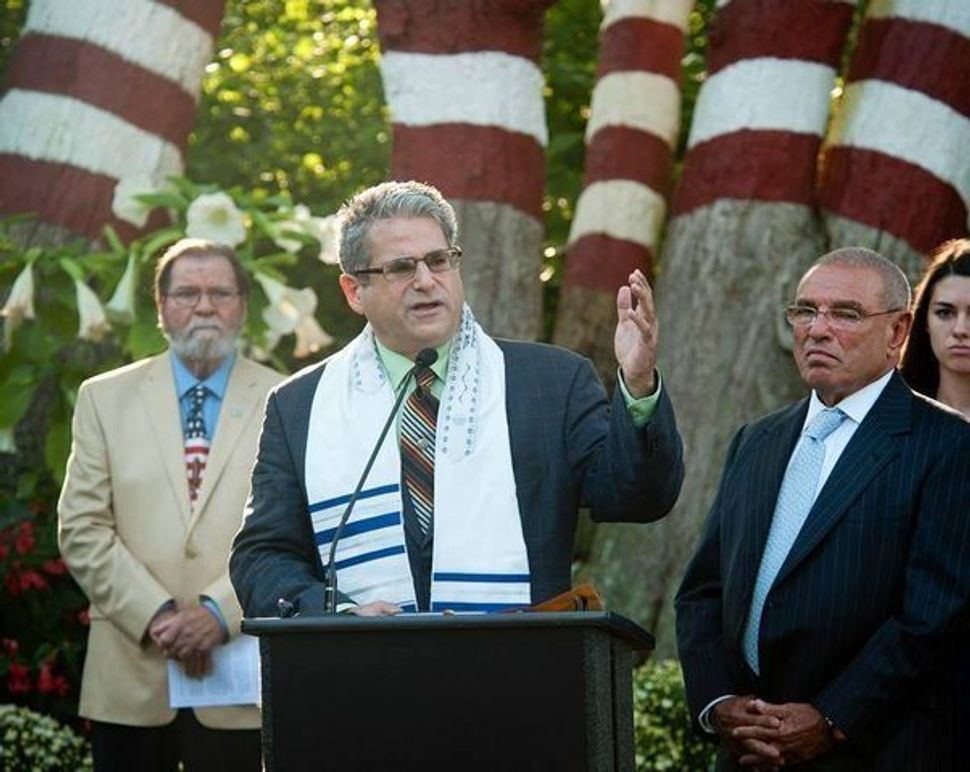 Rabbi Shaul Praver’s moment on the national stage was one he wished had never happened — chanting El Malei Rachamim, a Jewish prayer of mourning, at a nationally-televised vigil commemorating the life of his congregant Noah Pozner and more than 20 other children and adults gunned down at Sandy Hook Elementary School in Newtown, Connecticut.

Praver was inspired by his community’s tragedy to become an advocate for gun control in his state of Connecticut. Now, he hopes to use his experience to help him become the first rabbi elected to Congress.

“I felt this need to be involved and make things better, and as I started going to Hartford and Washington, D.C., I became a mover and shaker in my own right as far as policy goes,” he told the Forward. “I’ve gone as far as I can as a private citizen. Now I know I can do a lot in Congress.”

One of Praver’s top priorities is gun control and safety.

“I was drawn into the political process at the time of the shooting, which made me acutely aware that we had insufficient gun safety in the country,” he said.

Praver is running as a Democrat in Connecticut’s 5th district, which stretches from the tony suburbs of Newtown and Ridgefield to the state’s rural northwest, including wealthy pockets of Litchfield County and faded blue collar towns like Torrington.

The seat opened up after Democratic Rep. Elizabeth Esty announced earlier this month that she would not seek another term after being heavily criticized for how she handled reports that her chief of staff had violently threatened and sexually harassed other office employees.

Praver said he hopes to partner with Democrats and Republicans to pass sensible gun laws, similar to how he proceeded in Connecticut after the Sandy Hook shooting.

“I’m not looking to take guns away from anybody,” he stressed. “Being a Jewish person, I well understand the importance of defending yourself.” But just as car fatalities have dropped in the last 50 years due to improved licensing, training and regulation, so too can gun fatalities, he said.

He used an analogy from Jewish texts to illustrate his point.

“In the Talmud, the sages say a person can have a big dog… to protect their home,” he explained. “Then the question was, can you have a lion? The answer is no… at that point, the weapon is so powerful that the sages’ concern shifted from the individual to the community.”

“Think of the lion as assault weapons, and think of the dog as a normal weapon that one could have,” he explained.

No rabbi has ever served in Congress and recent rabbinic runs have ended badly. Celebrity rabbi Shmuley Boteach lost 74%-25% in New Jersey in 2012, and Rabbi Robert Barr of Cincinnati dropped out in February after only 10 weeks of campaigning.

But Praver may have a decent chance. With Esty’s resignation, there will be no incumbent running and several prominent Democratic and Republican lawmakers have passed on the race.

“So it’s a pretty wide open race,” Daniela Altimari, a reporter for The Hartford Courant, told the Forward.

Connecticut Public Radio host Colin McEnroe said the relatively short time between now and the August primary could make it a tough fight for Praver to edge out candidates with established political credentials. But he conceded that an outsider like Praver might get traction in a “crazy” political cycle.

“From where I’m sitting it looks like the deck is stacked against him,” McEnroe said. “But 2016 taught me to be more humble about what I do and do not know.”

Even if he gets the nomination, Praver’s election is not a sure thing. The nonpartisan Cook Political Report says that the district is “likely Democratic” and has been represented by a Democrat in Congress since 2006, but Hillary Clinton beat Donald Trump by just four points there in 2016.

It’s expected to be a strong year for Democrats nationwide, but Connecticut could be a different story. Gov. Dannel Malloy is a Democrat and his popularity has plummeted, leading some to predict that there could be tough sledding down ballot in the normally blue state.

“There’s a fear among some that his bad poll numbers could spill over and hurt other (Democrats),” Altimari said.

Also, Praver himself does not live in the district. That isn’t against the law, but voters might not like it. His answer to this possible objection: It won’t be an issue because “my entire career has been in Newtown,” which is in the district, he told the Connecticut Mirror.

Praver left his pulpit at Newtown’s Congregation Adath Israel in 2015 after the congregation decided it could not afford a full-time rabbi. But he has continued to serve as a chaplain for the state’s Department of Correction, which he said has also influenced his views on policy issues like drug addiction and mass incarceration.

“From the Reagan era we threw everybody out of the mental health residential facilities and we’ve moved that population into prisons,” he said.

Praver, who recently released a book called “Spiritual Guidance for the Incarcerated,” went on to say that the justice system should think differently about those who commit crimes as a result of their drug addiction.

“What we need to do in our society is treat addiction as a medical issue and not as a penal issue,” he said.

“There’s no crime when a person has diabetes and they need help. There shouldn’t be a crime when someone is addicted to drugs and needs help,” he added.

Praver admitted that he had been contemplating running before the news broke earlier this month.

“My timeline was more 2020, but when the event with Elizabeth Esty, who we worked with a great deal, happened, I realized that it was the time,” he said.

“Maybe God has a timetable different than mine,” he added.

Ultimately, Praver will be judged by whether voters think he can best represent them. He says that being a rabbi gives him qualities that will serve him well on Capitol Hill.

“A sense of integrity, diversity of opinion, spirituality,” he told the Forward. “These are the things that come to mind.”