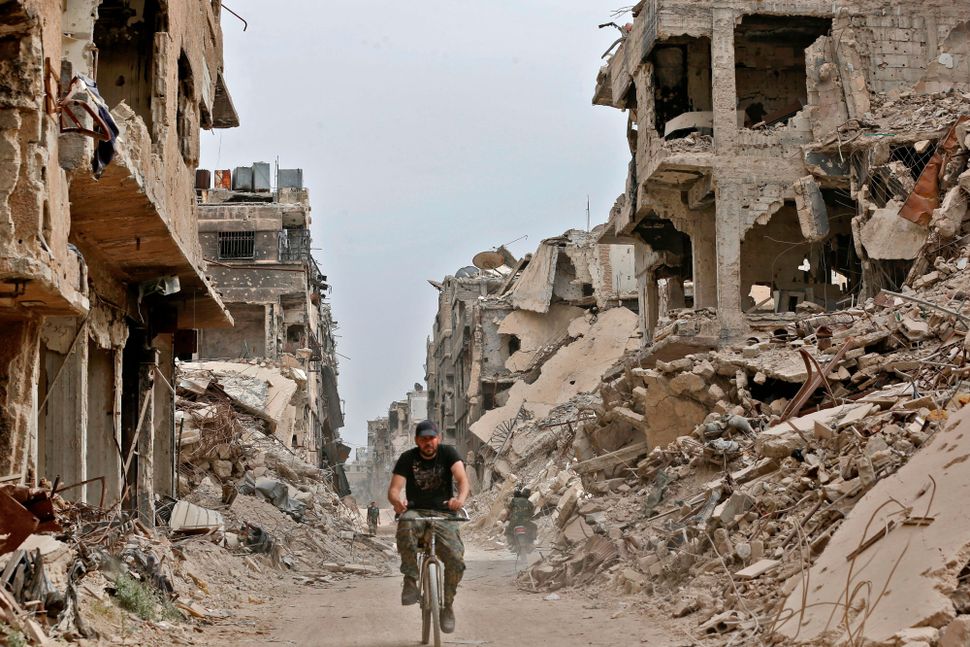 Yarmouk Palestinian refugee camp after being attacked by the Syrian army. Image by Getty Images

Syrian troops fought on May 20 to crush the last pockets of resistance by Islamic State militants trapped in an enclave south of Damascus, state media said, denying a report that insurgents had begun leaving in a withdrawal agreement.

The recovery of the enclave south of Damascus would mark another milestone in President Bashar al-Assad’s war effort, crushing the last besieged rebel enclave in western Syria.

Swathes of territory at the borders with Iraq, Turkey and Jordan, however, remain outside state control.

Syrian government forces and their allies have been battling to recover the enclave south of Damascus since defeating rebels in eastern Ghouta, also near the capital, in April.

The area is centered around the al-Hajar al-Aswad district and the adjoining Palestinian refugee camp of Yarmouk, the largest in Syria.

As of late April at least 20 civilians have been killed and 150 injured since the campaign began, mostly women and elderly, according to Ayman Abu Hashem, a lawyer and former camp resident in touch with residents who have stayed. The sprawling camp was part of a densely populated, impoverished squatter belt only few kilometers away from the heart of the capital.

The month-long battles have been the toughest fought by the Syrian army and its allied forces this year against opposition forces in pockets around the capital, defense experts say.

A spokesman for the United Nations Relief and Works Agency (UNWRA — the agency for Palestinian refugees), Christopher Gunness, told the London Telegraph in late April: “Yarmouk was a refugee camp that had already been transformed into a death camp, and even in that state it has just experienced a week of really intense fighting… Things have become unimaginably brutal for the civilians there.”

Despite extensive use of air power that has left many parts of the area leveled to the ground, troops and allied militias have sustained heavy losses as they encounter tough resistance from diehard militants waging a battle to the end.

In a live broadcast, a reporter with Syrian state TV said the Syrian army operations in the Hajar al-Aswad area were nearing their end and insurgent lines were collapsing as columns of smoke rose from the area behind him.

Syrian state news agency SANA said troops were about to close in on militants holed up in a small area of high density buildings north of Hajar al Aswad.

“The fighting skills of the army are foiling all the efforts by the terrorists to prevent the army from completing the liberation of the area,” SANA said.

The Syrian Observatory for Human Rights earlier said buses had entered the enclave after midnight to take out fighters and their families. They had left toward the Syrian Badia, a sparsely populated expanse of territory east of the capital that extends to the border with Jordan and Iraq, it said.

Islamic State militants had torched their offices in the Yarmouk enclave, the Observatory said.

Negotiated withdrawals have been a common feature of the Syrian war in recent years as the government, aided by the Russian military and Iran-backed forces, has steadily clawed back territory.

The opposition has called it a policy of forced displacement amounting to demographic change to drive out Assad’s opponents. The Syrian government has said nobody is forced to leave and those who stay must accept state rule.

While Assad has vowed to win back “every inch” of Syria, the map of the conflict suggests a more complicated time ahead from now on.

The U.S. military is in much of the east and northeast, which is controlled by Kurdish groups that want autonomy from Damascus. It has used force to defend the territory from pro-Assad forces.

Turkey has sent forces into the northwest to counter those same Kurdish groups, carving out a buffer zone where anti-Assad rebels have regrouped.

In the southwest, where rebels hold territory at the Israeli and Jordanian border, Assad faces the risk of conflict with Israel, which wants his Iranian-backed allies kept well away from the frontier and has mounted air strikes in Syria.