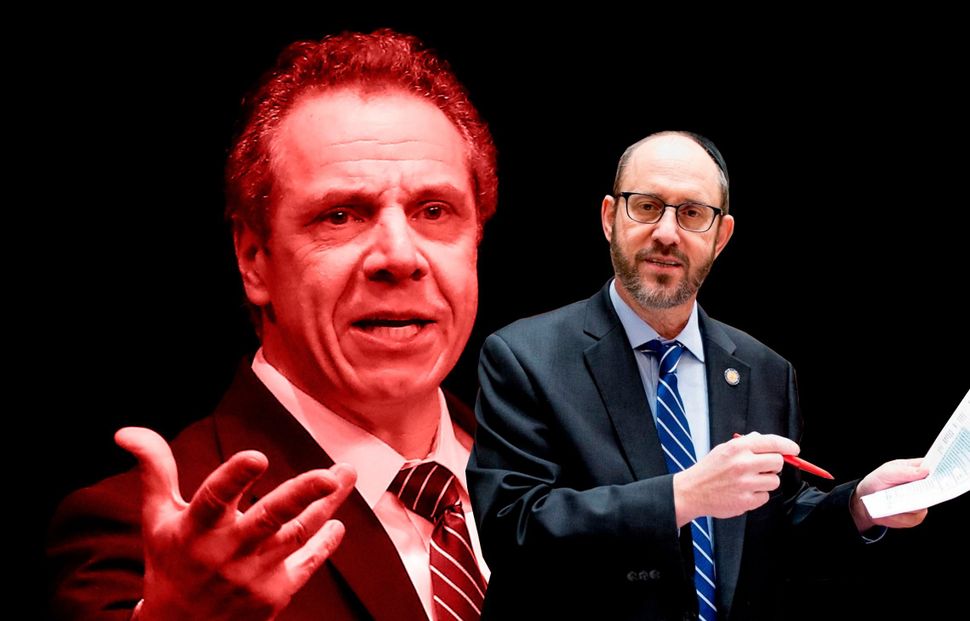 Brooklyn Orthodox leaders backed Sen. Simcha Felder in his increasingly nasty feud with Democratic leaders, branding party bosses “wild animals” after they moved Wednesday to back his primary opponent and kick him out of the party.

Boro Park Orthodox leader Yosef Rapaport said Democrats and Gov. Andrew Cuomo will only drive Jewish voters away by dumping Felder, who has handed control of the evenly divided Senate to Republicans.

“It’s like the wild animals showing their teeth to scare off people. Our community is expendable for the Democrats,” Rapaport said.

He lauded Felder for standing up to Democrats to demand increased tax breaks for yeshiva tuition and less regulation of ultra-Orthodox schools.

“With whom should he caucus? It’s simple math and simple political science,” Rapaport said. “What happened to recognizing his local needs?”

Thousands of registered Democrats voted for @NYSenatorFelder & will do so again with or without the Democratic line. Dems will regret the outrageous decision to kick Simcha out of the party. Only sensible Brklyn County leaders can stop this undemocratic madness#IStandWithSimcha https://t.co/Rn6qbI9m7O

Democrats see Felder as a turncoat for siding with the GOP, even though he has run on both major party lines. The party backed a motion to throw their support behind his primary challenger.

Community activist Blake Morris is the only other person so far to throw his hat into the ring.

Morris told the Forward he saw an opening with non-Orthodox voters and those struggling economically in Boro Park.

“People have needs in this district not being met by the incumbent,” Morris said, adding that he thought Felder was not a strong enough advocate on issues like affordable housing and healthcare. “What he considers his core are actually the people most damaged by his advocacy in the state Senate.”

Even with the backing of Cuomo and Democratic Party leaders, most analysts believe it will be hard for Morris to pull off an upset. Felder’s district covers the heavily Orthodox neighborhoods of Boro Park and Midwood.

“He can’t lose,” said Alan Chartock, a University at Albany professor. “They’re not going to turn their backs on him.”

Chartock said Cuomo might be ratcheting up pressure on Felder as a way to demonstrate his progressive bona fides now that Cynthia Nixon is challenging him from the left.

“[Cuomo] had to show that he meant business and that’s why the Felder thing happened,” he said about an April 25 letter Cuomo sent the senator imploring him to caucus with Democrats.

Lost in the fight is the bigger issue of the fight between the two parties for control of the state Senate, the only branch of state government in GOP hands.

Many analysts believe Democrats have a good chance to win several Republican seats amid anger at President Trump, flipping the chamber with or without Felder’s help.

“Why isn’t Felder seeing the change coming and saying he would jump to the Democrats?” he asked. “[It] doesn’t make a lot of sense.”

Former Newsday columnist Lawrence Levy said he thought close races near the city will still come down to local issues and that the Felder resolutions or potential Democratic control of the Senate may not matter.

“These suburbanites will support legislative candidates based on what they see as their self interest -– the people, Republican or Democrat, they think will stabilize taxes, protect schools and create jobs,” said Levy, who is Hofstra University executive dean of suburban studies.

Felder’s office did not return a request for comment.