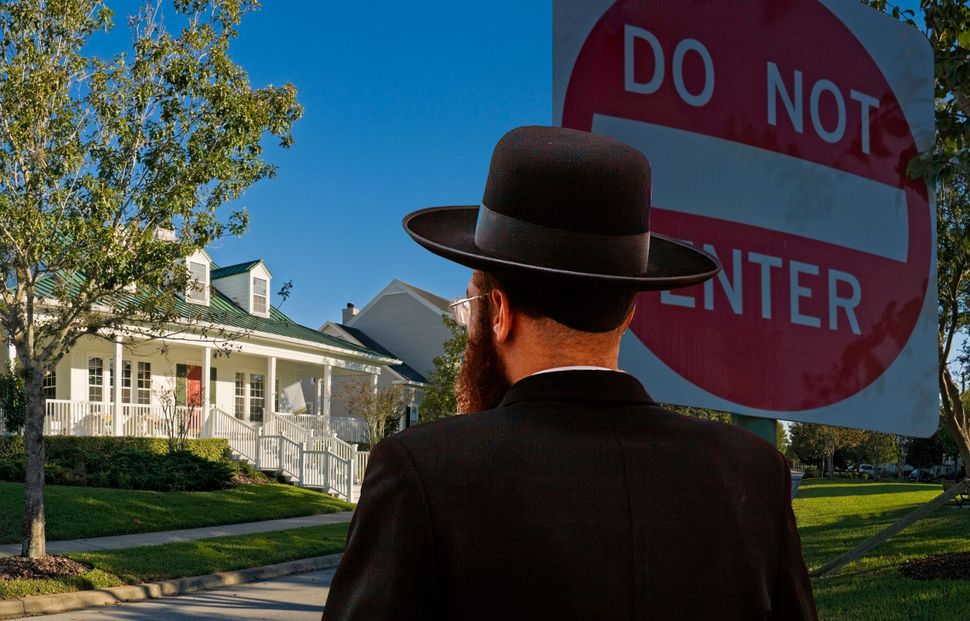 The first Hasidic couple to move to Highland Lake Estates alleges that on their first night in the new house, the head of the community’s homeowner’s association shined the headlights of his car into their home for twenty minutes. Other Hasidic families say they woke up to find their mailboxes vandalized or destroyed.

Once, the homeowner association’s vice president, Christopher Perrino, chased a prospective buyer out of the property, according to a lawsuit filed in late May.

“I know you guys are starting to come in here,” Perrino allegedly told another soon-to-be homeowner in the community. “You have to abide by the by-laws; you need to read the by-laws.”

The plaintiffs — all ultra-Orthodox Jews — say the homeowner’s association and its officers are using everything from unfair fines to security checkpoints to try to force them out.

Several Hasidic villages in New York’s Hudson Valley, such as Kiryas Joel, are in protracted spats with neighboring communities. Their exploding populations have both forced their residents to move and driven fears of Hasidic expansion in the region. The people who leave the enclaves carry the stigma of their former address with them, and in some cases are targets of discrimination. But even though they’re coming from controversial locales, that doesn’t make it any less illegal to bully them out of a neighborhood, says the lawyer bringing the suit.

“We have a great deal of tension,” said Michael Sussman, a civil rights attorney who lives in the area. “That tension is making its way to and affecting the lives of individual people like my clients, who want to move outside of Kiryas Joel and live among other people.”

Perrino declined to comment for this story. Other members of the homeowner’s association referred the Forward to their lawyer, who said he was not in a position to comment because he had not reviewed the complaint.

Highland Lake Estates is located in the village of Woodbury. It’s the picture of suburbia, with Lanes, Courts and Circles bordered by evenly spaced saplings. Its several dozen homes, listed for upwards of half a million dollars, sit on wide, manicured lawns.

Less than five minutes away by car is Kiryas Joel — the insular Hasidic community that is more densely populated than the borough of Queens, according to 2017 estimates from the U.S. Census. In 2020, the village will formally secede from its parent township, becoming the first exclusively ultra-Orthodox town in the country.

Hasidic Jews initially flocked to Kiryas Joel in the 1970s to form the kind of tight-knit shtetls that incubated their movement in Eastern Europe. As their populations exploded, they came into conflict with nearby communities over resources and funding. The municipalities have accused the Hasidic villages of commandeering local water sources and wrestling control of school boards, among other intrusions.

But the population growth has also pushed Hasidic Jews to look for housing in nearby secular communities. Local governments, fearing a takeover, have in some cases turned to exclusionary rule-making to keep Hasidic Jews out.

The suit brought against the Highland Lake Estates Homeowner’s Association alleges a pattern of bullying by the association’s officers going back to 2016. The plaintiffs include eight people who currently own homes in Highland Lake Estates, one prospective buyer who soured on the community and two real estate agents.

The case, which was filed in the Southern District of New York, does not have any hearings scheduled yet.

Some of the complaints mirror dust-ups in nearby communities. Highland Lake Estates allegedly amended its bylaws to effectively outlaw eruvs, the boundaries installed by Orthodox Jews that allow them to carry and push things on the Sabbath. In one case, the suit contends, a Hasidic man had to remove the eruv he set up in his front yard lest he be fined $10,000. (The community allows seasonal holiday decorations, like those for Christmas.) The community also allegedly prohibited realtors from showing homes on Sundays — the only day during the week when religious Jews can view houses, because they are working during the week, and are prohibited from driving on the Jewish Sabbath, which is Saturday. Another allegation states that the community prohibited using any property for prayer, which meant that Hasidic residents had to walk at least forty minutes to the nearest synagogue for services.

Sussman says that the behavior of the Homeowner’s Association’s board is “an absolute disgrace” — and indicative of how much anxiety there is in the region over Hasidic Jews.

Non-Hasidic residents worry that Hasidic expansion could devalue their property, Sussman said. The lawyer, who represented the NAACP in a landmark housing case that lasted nearly three decades, compared the residents’ concerns to rampant block-busting in urban communities the 1960s, when white residents feared an influx of African-American neighbors.

But Sussman says that just because there are villages like Kiryas Joel that are exclusively Hasidic, does not mean that every place a Hasidic person lives will go the same way.

“The idea that a certain number of Hasidic people mov[e] into a neighborhood, and that then has to define the entire neighborhood and everyone has to leave — I don’t follow that logic,” he said.

Sussman said that this case is similar to other complaints he knows about. He says that his firm is investigating three other municipalities in Orange County and neighboring Rockland County for discrimination against current and prospective Hasidic residents. He declined to say whether his firm will be bringing a complaint based on those investigations anytime soon.

“We’re in a dangerous time in terms of inter-group relations in this country,” Sussman said.