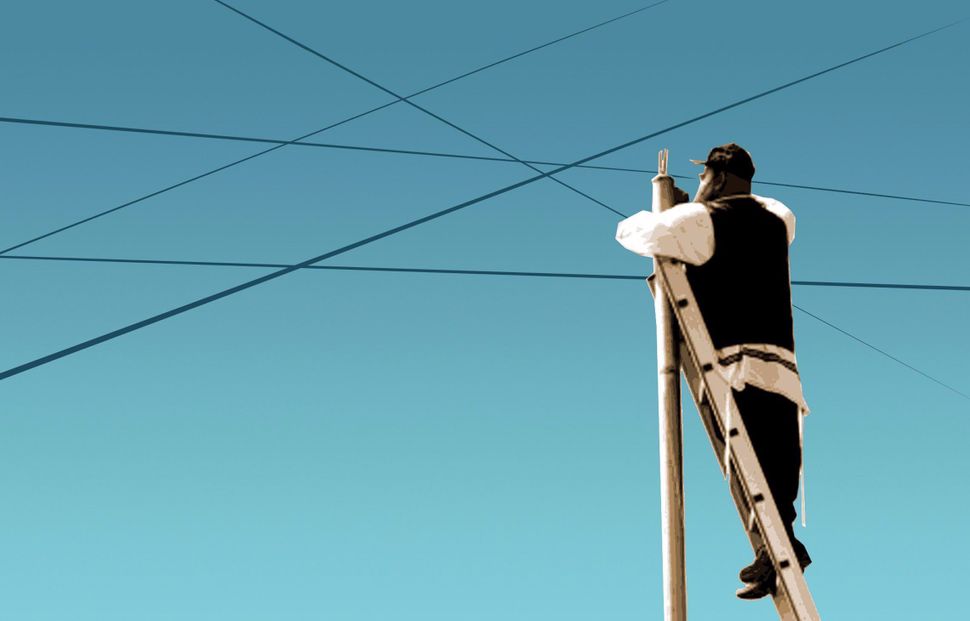 It’s a fence, but it doesn’t exist six days out of the week. It’s a symbolic extension of the home, but not an extension of private property. It’s an ingenious legal loophole, but it’s been Jewish law for 1,500 years.

It’s not a riddle, it’s an eruv: a boundary used by Orthodox Jews to expand the area where they can carry objects (and push strollers) on the Sabbath.

The simple wire fence has been the subject of controversy from London to the Hamptons, from Miami Beach to Venice Beach. Opponents have called it a religious intrusion on par with erecting a cross on public property. Orthodox Jews say it is an overtly feminist Jewish symbol. Whole towns have been sued over a measly eruv.

But really — what is it? 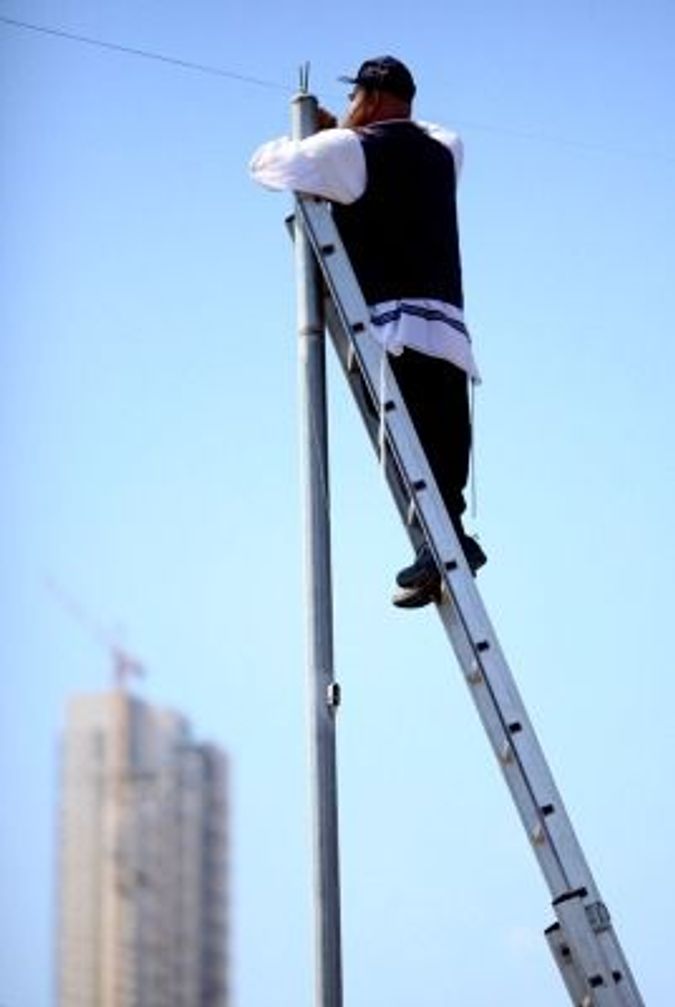 A man tends to the Jerusalem eruv. Image by facebook

An eruv is a continuous piece of wire or string attached to different kinds of fence posts, which are often made of plastic piping. An eruv in a city or suburb might run along PVC pipes affixed to local utility poles; an eruv at a summer camp might be strung through short wooden posts. The Jerusalem eruv, which serves more than half a million ultra-Orthodox Jews, has its own 20-foot metal poles.

There are eruvin (that’s plural for eruv) in hundreds of cities around the world. Manhattan has one. Minnesota has one. They range from the size of a backyard to over 30 square miles. The administrators of an eruv are constantly checking it to make sure it hasn’t broken. Most eruvin have text-message alert systems set up to tell people if an eruv has sustained damage leading up to the Sabbath.

An eruv is a legal loophole.

In the Torah it says, “No man shall leave his place on the seventh day.” The rabbis asked, “But what about food?” And so the eruv was born.

Without an eruv, observant Jews are bound by Jewish law not to carry things outside their home on the Sabbath. That’s why (if you look closely enough) you might see an Orthodox Jew carrying their house keys on a bracelet on Saturdays.

According to Rabbi Adam Mintz, co-president of The Manhattan Eruv, the eruv was invented at a time around the sixth century when Jews often lived in apartments arranged around a courtyard. The local rabbis came up with the idea of the eruv to allow people to bring things — like food — from their homes into the public area. (The word eruv comes from the Hebrew word for “mixture,” or “integration.”)

“All religions have legal fictions, and in order to enhance the enjoyment of the Sabbath, the legal fiction of the eruv that the rabbis instituted was meant to symbolically enclose an area so that the area could be considered as a symbolically private Jewish area,” said Mintz, who curated an exhibit at Yeshiva University called “It’s a Thin Line: The Eruv and the Jewish Community in New York and Beyond.”

An eruv is a legal agreement.

But even if the eruv makes the area it encloses a “symbolically private Jewish area,” it doesn’t mean that the area belongs to the Jews. The rabbis added a provision to the law to ensure (as best they could) that it could not be interpreted by gentiles as a kind of Jewish “eminent domain.”

What was this ingenious, cutting-edge provision? A lease agreement.

Take Manhattan, for example. The Jews of Manhattan (insofar as they have any collective representation) have an arrangement with the city of New York that stretches back over 70 years. Every 50 years, the city agrees to lease the land on which the eruv is erected for $1. Fiorello La Guardia inked the first eruv agreement; Rudolph Giuliani extended the lease in the 1990s.

Nowadays, the task of managing a modern eruv in a major city means more than just symbolic agreements. Mintz makes sure to renew permits with several New York City agencies, and the Manhattan eruv has a $100,000 budget for repairs.

An eruv is a feminist symbol.

Without an eruv, observant Jews cannot carry — or push — things outside their homes. That includes baby carriages. In communities without an eruv, that prohibition can enact a severe social cost for mothers of young children. As our lifestyle editor, Avital Chizhik-Goldschmidt, wrote:

“The moment that newborn arrives, it’s goodbye to Sabbath mornings in synagogue, goodbye to afternoon social outings, and goodbye to nice dresses. Instead, say hello to living in a robe in a claustrophobic apartment for a blurry 25 hours during which you can’t even use your smartphone to pass the time. It’s 25 hours of watching the clock, waiting for the hours to go by with no communication to the outside world.”

An eruv is a power play.

Just kidding, it’s not as simple as that. 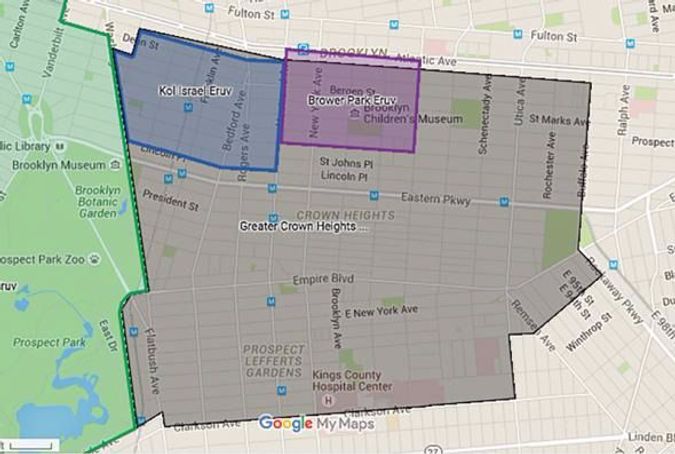 Boundaries: The Greater Crown Heights eruv, in gray, is the area contained by the controversial eruv. Image by Google Maps

Eruvin often come under fire from secular residents, but they are also a source of controversy within Jewish communities. Last year, in Brooklyn’s Crown Heights, the eruv around a Modern Orthodox synagogue was vandalized repeatedly after it was put up in a traditionally ultra-Orthodox neighborhood.

In the Hamptons, an eruv proposal pitted Orthodox Jews against Reform and Conservative Jews who reported not wanting their small town to turn into “ghettos.” The pro-eruv camp eventually came out on top.

The eruv has recently been a source of major controversy in the New Jersey town of Mahwah, where the council passed a rule aimed at making eruvin effectively illegal within the town’s borders. Residents of the town, a suburb of the New York City area, posted on social media that the eruv could bring an “invasion” of Hasidic Jews from neighboring towns in New York’s Rockland County. The New Jersey attorney general has sued the town for passing the law, which it calls “anti-Semitic” and unconstitutional.

The group that put up a short stretch of an eruv through a corner of Mahwah says it was simply joining Rockland County’s eruv — a system of pipes and wires enclosing nearly 30 square miles — along the shortest possible route. That group has also sued Mahwah in federal court.

An eruv is an endless source of dispute.

Read more about some of the biggest eruv dust-ups of the past few years: