What Were The Crown Heights Riots? 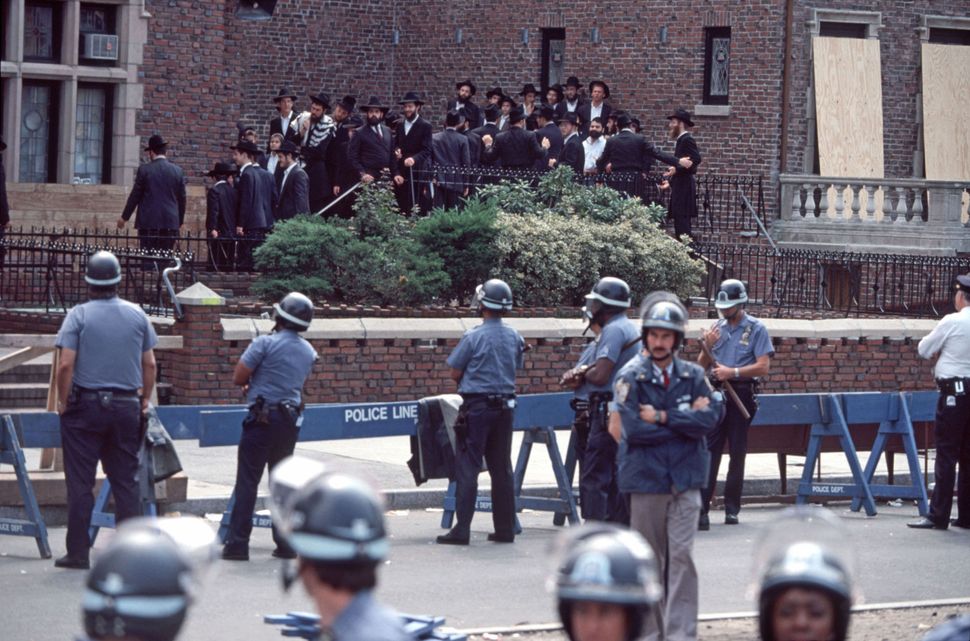 The intensity of the unrest that rocked Brooklyn’s Crown Heights neighborhood in 1991 is often surprising to those who learn about it. With streets dotted with small businesses and stately architecture, Crown Heights does not look like the site of one of New York’s most significant race riots.

However, the legacy of the three-day riot — and the brewing racial tensions that exploded during it — still affects Jewish and black relations in the neighborhood. Considered now the modern “center of Caribbean-American life,” Crown Heights is also the home of 770 Eastern Parkway, the center of the Chabad-Lubavitch movement.

What Caused The Riot?

Gavin Cato, a 7-year-old boy with roots in the Caribbean, and his cousin Angela were riding bikes in front of their house on a residential street when a car escorting the Lubavitcher Rebbe, Menachem Mendel Schneerson, struck and trapped the children underneath.

The details of the collision are still contested. The driver, Yosef Lifsh, said that he had a yellow light when going through the intersection as the final car in the escort. His station wagon was hit, and the collision resulted in the ultimate accident.

Lifsh claims he jumped out of the car to help the two children, but was attacked by an enraged crowd. Officers and an ambulance from Hatzolah, the Jewish emergency medical service, reported to the scene, all while an unidentified black man attempted to give Gavin Cato CPR. Police told the ambulance to bring Lifsh to safety, and onlookers watched as medics took only the Jewish driver away.

Gavin and Angela Cato were brought to the hospital about half an hour later. Gavin passed away that night. Angela lost half an ear.

What Happened During The Riot?

Rioting broke out as the rumor spread that the medics had ignored the black children, only giving attention to the white driver. Journalists reported that both Jewish and black youths began to attack each other in the streets. A book about the events, Henry Goldschmidt’s “Race and Religion Among the Chosen Peoples of Crown Heights,” carries similar accounts. Many Hasidim said the Jewish community was nonviolent.

Yankel Rosenbaum, a Hasidic scholar from Australia, was stabbed six times by a black teenager named Lemrick Nelson, and died after identifying the assailant to police. A Hasidic witness said in Goldschmidt she heard someone yell, ““There’s a Jew! Get the Jew! Kill the Jew!” Rioting continued for three days, primarily in front of 770 Eastern Parkway. Both sides criticized the NYPD for their response; the Hasidim complained that they and their property were not being protected, and the black residents complained they were being subjected to far harsher policing and punishment. As Goldschmidt writes, many Lubavitchers referred to the riot as a “pogrom,” while many black residents recalled a “riot” or “rebellion.”

Protests, as Goldschmidt details, took a few forms: peaceful marches that turned into “street battles,” looting of Jewish stores on Utica Avenue, and “small groups of pre- dominantly Black men assaulted Jews, journalists, police, and property.” During several of these protests, anti-Semitic epithets were yelled; some black protesters said these were meant to be provocative. Lubavitcher Isaac Bitton was “brutally beaten by a dozen or more people” as his 12-year-old son watched. Black journalist Peter Noel rescued him. The Daily News reported by the final night of the riot, more than 600 people took to the streets. There were numerous assaults, two shootings of motorists, and eight officers wounded by snipers, according to the police report of the incident. Mayor David Dinkins told police that he wanted an immediate end to the violence, and the next day 1,800 officers took to the street. Order was soon largely restored.

In 1993, Dinkins was officially faulted by the state of New York for his handling of the riot. The state report criticized Dinkins for relying “uncritically” on analysis from police officers, who reportedly underestimated the violence, and for not taking into account reports from community leaders.

This report, and Dinkins’ own admissions of mishandling, is thought to have influenced the 1993 mayoral election. Republican Rudolph Giuliani defeated Dinkins that November. Giuliani now serves as President Trump’s attorney.

Rebuilding work and community engagement in Crown Heights remains strong, although racial tensions continue to flare. The 2008 assault of 20-year-old Andrew Charles, a black man and the son of a NYPD officer, [ignited more conflict.](https://www.nytimes.com/2008/05/22/nyregion/22crown.htm”Knockout games,” where assailants attempt to knock out passersby with one punch, seemed to target Hasidic Jews in 2013.

Most recently, the police shooting of Saheed Vassell, a 34-year-old unarmed black man with bipolar disorder, stirred up fears over the implications of gentrification in the neighborhood. In April, two Jewish men, Ari Ellis and Menachem Moskowitz were brutally beaten within days of each other.

Groups like the Crown Heights Mediation Center and Project CARE, a coalition of community leaders, have built community initiatives to bring together the different neighbors of Crown Heights. In 2016, to mark the 25-year anniversary of the riot, the community hosted an inaugural festival called “One Crown Heights” in celebration of unity. The festival also took place in 2017.

Update, SJuly 27, 3:51 p.m.: [The author has updated this article to add details of the riots in the section “What Happened During the Riot”?]

What Were The Crown Heights Riots?