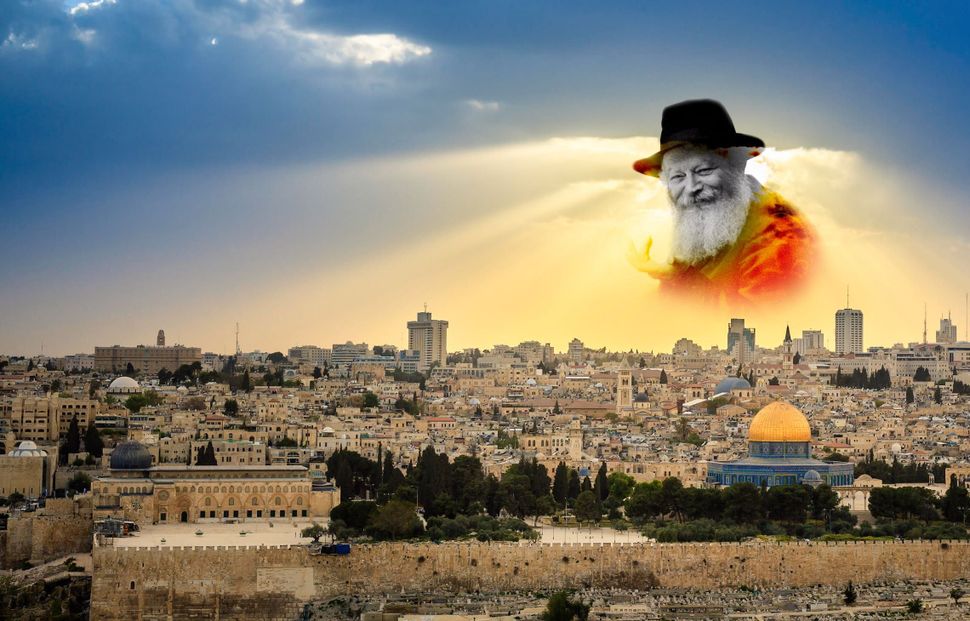 The Messiah is coming — again.

That was the message at a conference of rabbis from around the world, held the weekend before Thanksgiving in Brooklyn. The keynote speaker said he believed, at his “inner core,” that the late leader of the far-reaching Chabad-Lubavitch movement would soon return to prepare the world for redemption.

“It is so clear that the world is moving towards moshiach,” said the rabbi, Reuven Wolf of Los Angeles, using the Hebrew word for “Messiah.” “This is what it was all about from the very beginning. For us to ignore it is a problem.”

For decades, many within the movement believed that their beloved rebbe, Menachem Mendel Schneerson, was the Messiah. When he died in 1994 without having revealed himself as such, his closest advisers — the highest levels of Chabad’s leadership — tried to put an end to the overt messianic fervor. But the belief persisted, and has now morphed into both a power struggle and something of a public relations problem for the organization, whose “mitzvah campaigns” and “Chabad houses” reach millions of Jews each year. Even as Chabad’s leadership is still trying to purge its movement — and its headquarters — of members who would call Schneerson “Messiah,” they are loath to admit that such people exist.

Each year, in November, Chabad-Lubavitch hosts a conference for the thousands of international emissaries representing the movement in 100 countries. Though the final banquet was held this year in a massive warehouse in New Jersey, many of the conference’s events are held at Chabad’s iconic headquarters at 770 Eastern Parkway, in Brooklyn’s Crown Heights neighborhood. The building, known to many simply as 770, overlooks a section of Crown Heights that is almost exclusively Hasidic.

At the same time, the movement’s messianic faction has its own parallel gathering. It culminates in a post-Sabbath gala in the basement synagogue where Schneerson often received his followers and led them in prayer.

During the rest of the year, the basement is lit with fluorescent bulbs that expose the room’s scratched linoleum floors and peeling paint. But on the Saturday night before Thanksgiving it was awash in pink and purple light. Men wearing black suits and either fedoras or fur shtreimels sat at tables with maroon tablecloths. At several points during the evening, the men got up and danced to upbeat Hasidic music. A large banner read “Long Live Our Master, Teacher, Rebbe, King Moshiach Forever and Ever.”

Citing the twin ascents of Donald Trump and Vladimir Putin — one with an Orthodox daughter and the other with close ties to Moscow’s Chabad center — Wolf roared that surely the “greatest revelation” is at hand.

At the main event, the takeaway was very different. There was hardly any open discussion of the identity of the Messiah. Rather, the speakers rallied the crowd to complete Schneerson’s “mission”: Bring Jews back to Judaism.

Hasidic Judaism appeared in the 18th century as a spiritual revival movement grounded in mysticism and esoteric readings of traditional Jewish texts. It quickly gave way to dozens of dynasties of rabbinic leaders. Hasidic culture emphasizes absolute fealty to these rebbes, the charismatic leaders of groups that can encompass a single neighborhood or straddle oceans.

Schneerson took over the Lubavitcher branch of Hasidic Judaism in 1951, assuming the mantle of rebbe from his father-in-law. He eventually turned what was a small community with roots in the Ukrainian village of Lubavitch into the modern, globe-spanning Chabad movement. (“Chabad” is an acronym in Hebrew, meaning “wisdom, understanding, and knowledge.”)

Schneerson was the group’s seventh and last leader, the most visible face of the generation of postwar Hasidic leaders that rebuilt ultra-Orthodox Judaism in America after the Holocaust.

Unlike other Hasidic groups known for their insularity, Chabad is focused on outreach. The organization has centers on hundreds of college campuses, and embraces technology in its efforts to bring religious observance to a wide swath of Jews.

The rebbe’s followers lie on a spectrum of belief about the Messiah, scholars who study the movement say. On one end are those who fully embrace the rebbe as the redeemer of the world; on the other are some who say no man can declare himself or anyone else the Messiah.

Just after Schneerson’s death, in 1994, the remaining leadership took steps to quash the widespread expectation among Chabadniks that he would be revealed as the Messiah. The movement shifted its focus away from Crown Heights and poured vast resources into developing hundreds of outposts around the world and filling them with dedicated emissaries, or shluchim. Despite the ubiquity of Schneerson’s picture in schools and centers run by Chabad, it’s not as strong a messianic symbol as it once was.

“The rebbe used to teach in the name of his father-in-law, all you have to do is wait for the knock on the door and then open the door,” said Elliot Wolfson, a professor of Jewish studies at University of California, Santa Barbara and the author of the 2009 “Open Secret: Postmessianic Messianism and the Mystical Revision of Menahem Mendel Schneerson.” “I don’t think they’re listening for the knock on the door anymore.”

Each November, the official Chabad conference draws thousands of emissaries. This year saw more than 5,000 men gather for the annual “class photo.”

The larger conference celebrates the movement’s “soldiers,” the emissaries spreading the rebbe’s message of understanding and observance — with implicit reference to a hoped-for redemption. The smaller conference hones in on the need to hasten the coming of the Messiah.

For all their enthusiasm, the contingent of Chabad that believes Schneerson to be the Messiah is dwarfed by the movement’s mainstream. A few hundred people crowded the basement of 770 at the final event of the messianic conference, while over 5,000 people attended the banquet gala of the official conference. They came from thousands of “Chabad houses” across nearly 100 countries. Academics have estimated the movement’s size at about 40,000, though some have put the number at more than 100,000. Through holiday services, Sabbath meals and “mitzvah campaigns” that encourage secular Jews to participate in Jewish rituals like wrapping tefillin or shaking the lulav, the closed frond of the date palm tree, they reach millions of Jews every year.

A Question Of Authority

There is no love lost between the leadership of the dueling factions.

“Have you bought a Rolex on Fifth Avenue for 50 bucks?” said a leading mainstream Chabad rabbi who declined to be named. “It has the same appearance, but the movement is an entirely different matter.”

At the Crown Heights headquarters, the theological divide has turned into a legal battle, with the movement’s official leadership trying to essentially evict the messianic group from its basement redoubt. Some in the leadership refer to the building’s belowground synagogue as “occupied territory,” the Chabad rabbi said. The basement faction has no plans to cede the space, observers say. (An official spokesman for Chabad did not respond to a request for comment.)

The messianic struggle has different meanings to people on either side. Those in the more mainstream camp view it as a crisis of authority. They say the messianic group does not respect the late rebbe’s advisers, men who led the movement after Schneerson died childless and without appointing a successor.

“The heart of the problem is defiance of the rebbe’s authority structure,” the anonymous Chabad rabbi said. “Even if you may not approve of the people at the helm of Chabad’s mainstream, you cannot deny their placement by the rebbe.”

Rabbi Eli Cohen, executive director of the Crown Heights Jewish Community Council and a member of the messianic camp, argued that most Chabadniks are not as concerned as the leadership about the widening power struggle. Cohen said that, from his perspective, most shluchim have simpler things in mind than the movement’s official stance on redemption.

“They are just followers of the rebbe, and they want to do what they understand what the rebbe’s mission is, which is to bring kindness and bring moshiach,” he said. “That’s the rebbe’s agenda from day one.”

Cohen says that even the concept of the Messiah — something Schneerson wrote about extensively but quite cryptically — can have a number of interpretations.

“I think people mostly understand that bringing moshiach was about making the world a better place,” he said. “That’s the underlying message that everyone would agree to.”

But one expert says that the power struggle hides a broader truth: that the majority of the movement really does believe that the rebbe is the Messiah.

“The messianism is at the heart of what they do, and the only differences is between when and where they talk about it, and that hasn’t changed as far as I can tell,” said Samuel Heilman, a professor of sociology at Queens College and the co-author of the 2010 book “The Rebbe: The Life and Afterlife of Menachem Mendel Schneerson.” “If they don’t have that, what’s the purpose of their tenets, of their gathering? What can they get people excited about?”

Even the group’s talk of a “mission” is loaded, Heilman says: The mission is to “bring the Messiah.”

“They’re all on the same team, really,” Heilman said.

It is unclear who the torchbearers of Schneerson’s messianic crown will be in the coming years. There are some international Chabad outposts — such as the ones in India — that are known for having conviction that Schneerson will return, Heilman said.

On the whole, however, the movement’s emissaries are known for being a moderate group. They live in secular communities like college campuses and are tasked with making religious observance accessible to a wide swath of Jews. The number of emissaries grows each year — and none of them grew up with a living, breathing rebbe to fuel any messianic enthusiasm they might carry. That leaves the future of redemption in doubt.

“When the rebbe was alive, Crown Heights was the center of the world,” Heilman said. “But now that he’s dead… the center is in the ether, it’s with the people who are carrying out the mission.”