Why Was A ‘Righteous Gentile’ Turned Away From The Cemetery He’s Trying To Save? 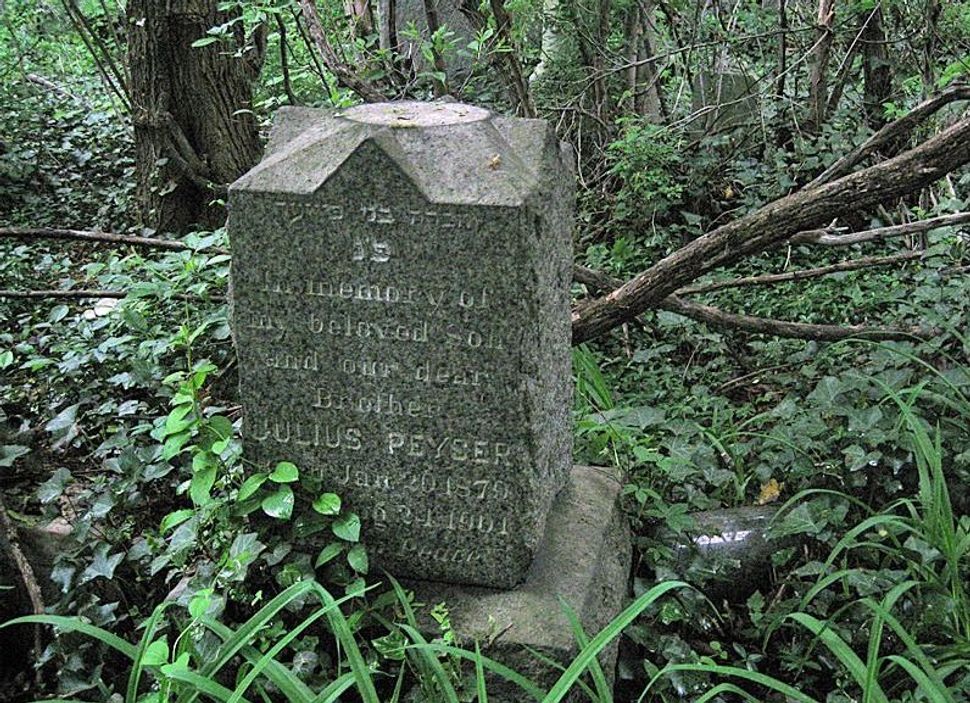 Richard Levin, a reproductive surgeon in Louisville, Kentucky, has been researching his family history for over two decades. Several years ago, he uncovered the name of a relative — the brother of his great-great-grandmother — in New York City archives. But Levin’s busy schedule kept him from going to the relative’s grave in the dilapidated Bayside Cemetery, in Queens, which has been the subject of a protracted legal squabble over who is responsible for its repairs.

Then, a couple months ago, Levin connected with Anthony Pisciotta on Facebook. Pisciotta, who is Catholic, has spent most of his Sundays for ten years bushwhacking through Bayside, cleaning headstones and repairing mausoleums. Pisciotta promptly found the marker for Levin’s ancestor: It was tipped over, half-buried in the dirt, cracked in two.

But when Pisciotta returned to Bayside last Sunday to lift the headstone up and glue it back together, the cemetery’s guard turned him away at the gate. He said he was under orders from “the big boss.”

“He said they had orders not to let anyone in to do any work,” Pisciotta said. “I’m the only person who goes in there. So it was basically pointed at me.”

The dismissal is the latest incident in Bayside’s long and depressing saga. Pisciotta and a not-for-profit that supports the restoration of Jewish burial grounds have been trying to revitalize the cemetery for years. The synagogue that owns Bayside sold its building last year, in part to help pay for renovations under a plan brokered with the city government. But the not-for-profit is now saying the synagogue’s plan leaves out funding to make crucial repairs, and is concerned the synagogue is trying to get out of paying the full $8 million the city is requiring them to spend on Bayside.

Levin says that regardless of the outcome of the turf war, Pisciotta doesn’t deserve to get lost in the shuffle.

“They talk, in Israel, about the righteous gentile,” Levin said. “Anthony is doing the work that Jews, and a synagogue, should be doing, should have been doing.”

Shaare Zedek, a congregation that was formed in 1837, is the lawful owner of Bayside. Michael Firestone, the synagogue’s president, declined to comment on Pisciotta being turned away at the gate.

“As we’ve previously stated, Shaare Zedek is committed to maintaining Bayside Cemetery in a safe and respectful condition going forward,” the synagogue said in a statement. “To that end, we have retained a professional landscaping firm to both conduct one-time remedial work at Bayside (which is well underway) and an ongoing maintenance program thereafter. While there is still much work to be done, in terms of both landscaping and other repairs and capital improvements, we intend to let the work speak for itself, rather than engaging in a public debate about our plans before we’ve even had a chance to carry them out.”

Pisciotta may be something of an unsung hero in the Jewish world. But at least in local New York City media, he has received attention for years for his unwavering dedication to Bayside, despite not being Jewish and having a full-time job. (He works for the Port Authority.) He found the cemetery over twenty years ago while driving a delivery truck through its neighborhood in Queens.

“Every stone has a story,” he said in June. “And that’s why I think it’s important that the place be saved and preserved.” 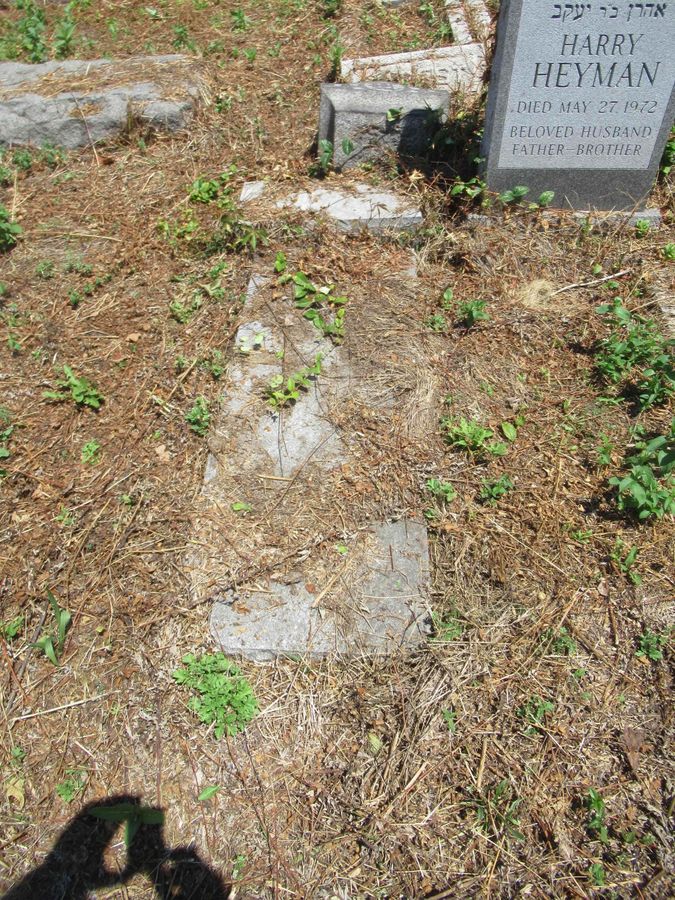 Pisciotta said that when he went last Sunday to repair the headstone for Levin’s relative, the guard told him he was under orders not to let anyone in to do groundskeeping work. Pisciotta said he felt the order must have been directed at him, since the cemetery is normally open to visitors on Sundays and Wednesdays. Levin said that when Pisciotta called him to say that he would not be able to repair the relative’s grave, he sounded “despondent.”

“It’s incredibly frustrating, because I’ve been trying to get that place cleaned up so I can get back to work lifting stones,” he said. “What are they gonna wait for, for it to go to crap again, before they let me back in?”

As Pisciotta has continued his efforts, and Shaare Zedek has employed a Long Island landscaping firm to begin renovating the cemetery, the synagogue has been wrangling with another organization over its renovation plan. The Community Alliance for Jewish-Affiliated Cemeteries, or CAJAC, has been trying to return Bayside to its former glory for years. They have filed several affidavits with the city, trying to sway the Attorney General’s office in its decisions over how much Shaare Zedek has to spend on Bayside’s repairs.

Jamie Cotel, CAJAC’s executive director, filed another affidavit on Thursday detailing her concerns. The affidavit, which Cotel shared with the Forward, says the synagogue’s plan “provides no data (and very few specific details) about the actual work to be undertaken.” Cotel writes that the synagogue may have vastly underestimated the price of digging up and resituating thousands of toppled stone monuments throughout the cemetery, some of which weigh well over a thousand pounds and are completely sunken below the ground. Cotel said she filed the affidavit after Shaare Zedek declined to share a detailed budget of their plans for Bayside with CAJAC.

“We merely wanted to respond and ask for the backup documentation, and how they arrived at the numbers they intend to spend,” she said.

The affidavit also alleges that Shaare Zedek is trying to spend millions less on Bayside than the $8 million initially required by a 2017 court order, which came out of the synagogue’s deal to sell its 90-year-old temple on the Upper West Side to a developer in exchange for $16 million in cash and ownership of a worship space on the first floor of the residential building planned for the space.

“$8 million is the bare bones number,” Cotel said. “Our position is that the cemetery really needs $10 to $15 million.”

But Shaare Zedek feels they have been doing more than they get credit for. Though the synagogue is the lawful owner of Bayside, they sold off over 90% of its plots to burial societies in the 1800s. Those societies have largely disappeared, leaving the synagogue holding the bill for repairs across 12 acres of tightly-bunched headstones. Russell Steinthal, Shaare Zedek’s lawyer and a board member for the synagogue, has told the Forward that in certain years, the synagogue has put nearly 40% of its operating budget towards servicing Bayside’s roughly 35,000 graves. 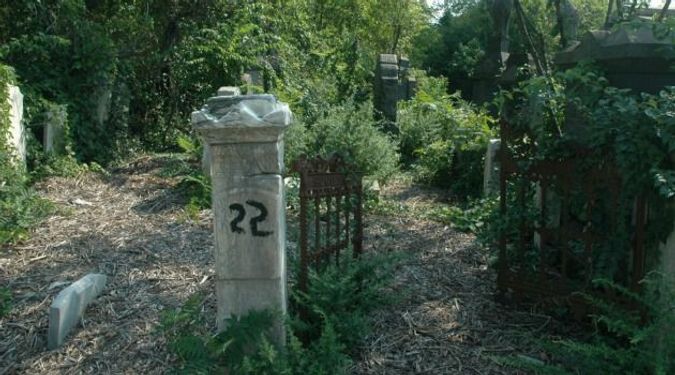 Bayside Cemetery in Queens before a UJA-Federation-funded cleanup in 2010. Image by Community Association for Jewish At-Risk Cemeteries

Levin wondered if Shaare Zedek couldn’t try to raise additional money from the descendants of people who are buried at Bayside. The cemetery is the final resting place for many Jews on the edges of the history books. Longtime tenants include a U.S. Congressman, a victim of the Titanic sinking, and, Pisciotta says, an ancestor of the family that owns The New York Times. More recent additions include Frances Lewine, the AP’s first female full-time White House reporter.

“There’s a lot of people out there, and it’s the decent thing to do,” Levin said.

He added that the Jewish community at large may be responsible Bayside’s misfortune, and that the fault does not lie only with Shaare Zedek.

“They probably didn’t do this with an evil heart,” he said. “I’m perfectly willing to look at the long game, not the short game.”

Why Was A ‘Righteous Gentile’ Turned Away From The Cemetery He’s Trying To Save?