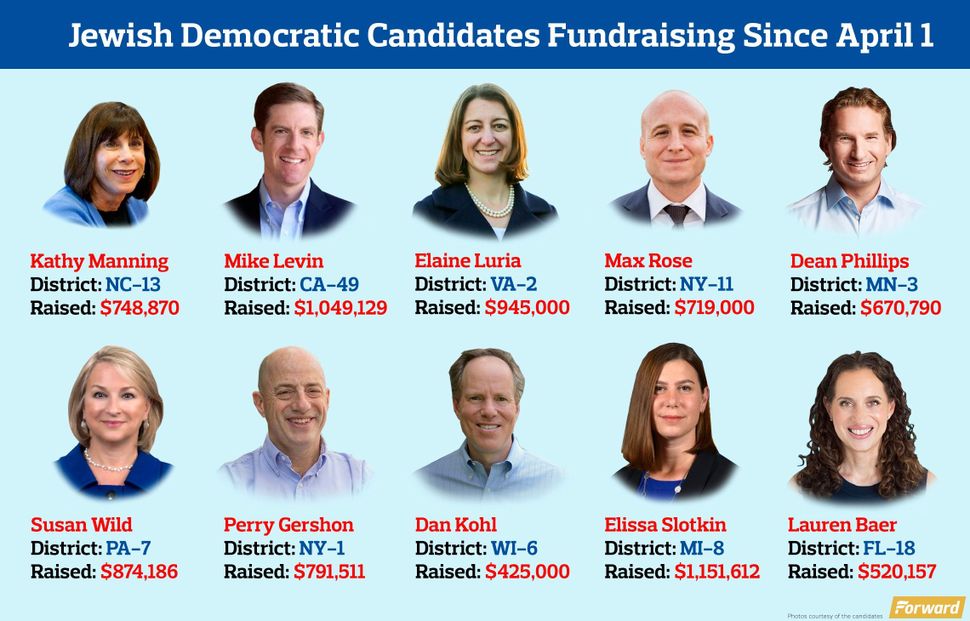 Several Democratic candidates in swing districts outraised their Republican rivals in the second quarter of 2018. Image by Forward Montage

Mike Levin said small donations have paid off for him in a big way. The Southern California Democrat is part of a slew of swing-district candidates whose strong fundraising numbers experts consider an indicator the party has a shot of retaking the House of Representatives in November.

Levin, whose father is Jewish and mother’s parents emigrated from Mexico, raised $2.6 million since announcing his run in March 2017, more than three times what his Republican counterpart, Diane Harkey, has brought in. And he has the broad backing of over 100,000 small donors who gave an average of $26 each.

“I feel like we have a ton of momentum. No one is going to outwork us,” the candidate said on July 20.

Candidacies like Levin’s are an example of powerful Democratic voter enthusiasm that has some respected analysts saying they have a solid chance at flipping the House. However, Republicans have their own advantages, including huge infusions of cash into several super PACs — political committees that can raise unlimited amounts of money, but can’t coordinate with candidates — from mega-donors like Jewish casino mogul Sheldon Adelson, who gave $30 million to the GOP-linked Congressional Leadership Fund in May.

Levin is one of a crop of Democratic Jewish challengers in swing districts across the country who have significantly outraised their Republican counterparts, including several incumbents, in the last financial quarter, the Forward has found in a review of the latest crop of filings with the Federal Election Commission.

The group of ten Democrats, including Kathy Manning in North Carolina, Elissa Slotkin in Michigan, Susan Wild in Pennsylvania and Levin in Southern California, took in more than $7.8 million from April 1 through June 30, compared to nearly $6 million their Republicans rivals brought in, FEC filings show.

Democrats outraised Republicans in 72 out of 95 competitive races during the same period. Some analysts see this as a sign of Democratic gains in November.

The party needs to pick up 23 seats to gain a majority, which would put Democrats in a position to challenge President Trump in a way that Republicans have not. Two venerable non-partisan political forecasting firms say the Democrats could take back the House.

A near eight-point advantage in generic Congressional polling is a positive indicator for the party, Geoffrey Skelley, managing editor for the nonpartisan political forecaster Sabato’s Crystal Ball told the Forward, as is Trump’s approval ratings, which are hovering just north of 40%. The generic ballot is the percentage of voters in national surveys who say they intend to vote for either the “generic” Republican or Democrat in their district, if the race were being held the day the question was being asked, according to the Pew Research Center.

“Candidate fundraising definitely points to Democratic enthusiasm, especially in suburban districts where Democratic voters are looking for an outlet to vent their frustrations with the president,” said Leah Askarinam, a reporter/analyst with the nonpartisan Inside Elections.

That organization, which is forecasting the Democrats pick up between 20 and 30 seats, said the fundraising hauls are especially important for candidates who are challenging incumbents.

“You need enough money for voters to know who you are and what your message is,” she said. “[That] could mean advertising on TV. Incumbents don’t need quite as much since they’ve already been on the ballot [and voters know their names].”

Of course, Republicans have their massive super PAC funds to deploy against the success Democrats have experienced in individual races, Askarinam said.

The analyst added the impact of Adelson’s money will be tested during an upcoming special election in the suburbs around Columbus, Ohio, with the CLF spending substantial funds on TV spots endorsing Republican Troy Balderson against Democrat Danny O’Connor.

Troy Balderson of Ohio is running for Congress against a Nancy Pelosi Liberal who is WEAK on Crime & Borders. Troy is the total opposite, and loves our Military, Vets & 2nd Amendment. EARLY VOTING just started with Election Day on August 7th. Troy has my Full & Total Endorsement!

“Democrats in moderate, competitive districts have spent the majority of their money highlighting their progressive bona fides. Meanwhile, Republicans have continued to pad their campaign coffers and are well positioned to execute effective campaigns this fall,” NRCC national press secretary Jesse Hunt said.

But other former Republican mega-donors like Seth Klarman are now withholding millions of dollars in funds for the GOP and instead backing Democratic candidates across the country.

Skelley said Democrats have been looking especially strong in challenging open seats, including Levin’s run to win back the district where Republican Rep. Darrell Issa is retiring.

“I think the national numbers are probably where they need to be for Democrats to win back the House,” Skelley said. “Money will matter to some degree in some marginal races, but it’s not everything.” The combination of a large number of small donors, voter enthusiasm and disgust at Trump could put the Democrats over the top, he said.

A number of the other Jewish challengers also have support from the Democratic Congressional Campaign Committee’s Red-to-Blue campaign, aimed at flipping enough seats to retake the House.

A number of the candidates — including Levin, Baer and Phillips — also live in districts with a higher than average Jewish population than the national average.

“Democrats have the infrastructure and message to capitalize on a historic surge of grassroots energy by raising record amounts from small-dollar, online contributions. There’s no question that Democrats are charging into the general elections with all the momentum,” DCCC spokesman Tyler Law said in a statement.

Harkey’s campaign did not respond to a request for comment.

Correction, July 24, 4:30 p.m.: The Forward initially reported that Levin was sitting on a war chest of $2.6 million. His campaign has raised that in total, but spent a large portion of it during the primary. The Forward also clarified that his mother’s parents were born in Mexico while she was born in the United States.