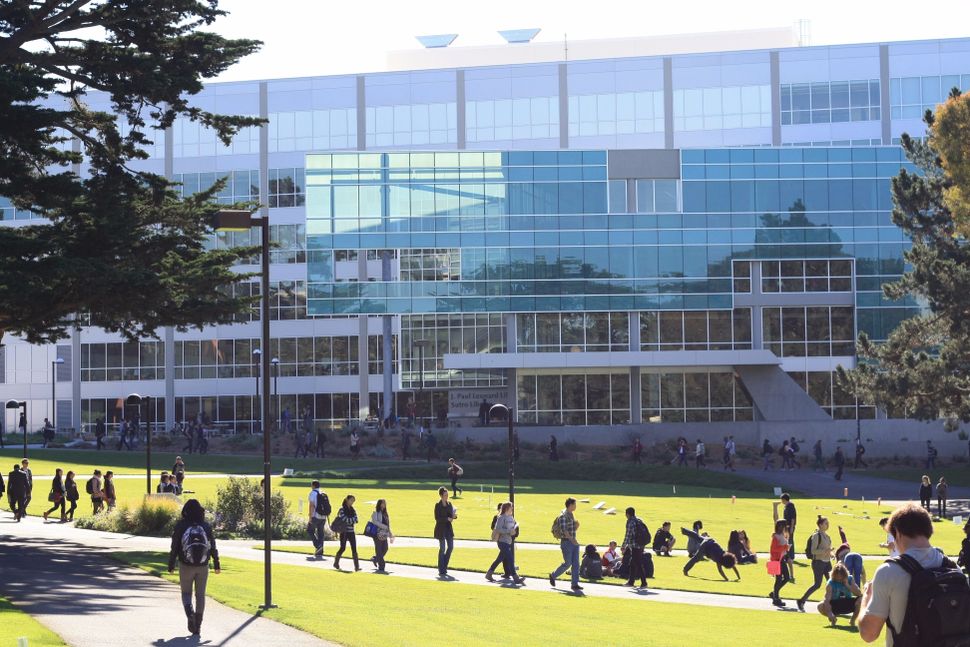 Jewish students at San Francisco State University have been arguing in federal court for more than a year now that their university is anti-Semitic. Their proof: They say the university discriminated against Hillel, the biggest Jewish student group.

Other Jewish students — their group is called “Open Hillel” — have joined the case. Yet Open Hillel is on the side of San Francisco State.

That’s because Open Hillel doesn’t believe Hillel represents all Jewish students; therefore, discrimination against it is not inherently anti-Semitic.

The difference between the two groups boils down to Israel. Open Hillel says that Hillel International, the umbrella organization of national Hillel chapters, “does not welcome all Jewish students” because it does not allow partnerships with groups that don’t support Israel’s right to exist.

That’s why Open Hillel filed an amicus or “friend of the court” brief in May supporting San Francisco State. Hillel operates on more than 550 college and university campuses, while Open Hillel draws its supporters from a relative handful. Yet Open Hillel’s argument could sink the case against San Francisco State in its next hearing on Wednesday — and possibly have broader implications for anti-discrimination law. It’s also an escalation in Open Hillel’s years-long campaign against Hillel International and its Israel rules, which is similar to the efforts of other groups like IfNotNow that fight against what they see as the Jewish establishment’s uncritical support for the Jewish state.

“There needs to be recognition and acceptance, even within the ‘official’ Jewish organizations, that there are many people who do not agree with an uncritical acceptance of the actions of the Israeli government,” Dan Siegel, the civil rights attorney who filed the brief on Open Hillel’s behalf, told the Forward.

The lawsuit, filed by six Jewish SFSU students and community members against the school and members of its administration, claims that the school discriminated against them when Hillel was excluded from a school-sponsored “Know Your Rights” fair in February 2017, and when the school required an April 2016 speech by Jerusalem mayor Nir Barkat to be held in an inconvenient and fee-requiring location, and then allegedly did not do enough to stop pro-Palestinian protesters from disrupting the event.

An independent investigation found that the Barkat event did not have the proper security protocol, and university president Leslie Wong has repeatedly apologized to the Jewish community over the campus atmosphere.

But the most recent apology in February did not mollify many SFSU students interviewed by j., the local Jewish newspaper, and Wong remains a defendant in the lawsuit.

San Francisco Hillel director Ollie Benn noted in an email to the Forward that the Hillel is not a party in either this federal lawsuit or a similar one in state court. But, he wrote, “we have repeatedly expressed serious concerns about the climate at SF State.”

A previous version of the federal lawsuit was dismissed in March after the judge criticized it for excessive length, redundancy, irrelevance and other weaknesses. The plaintiffs were given the opportunity to refile their case, and a hearing on Wednesday in San Francisco may determine whether it will proceed.

That hearing may also determine whether to admit Open Hillel’s amicus filing, which is being challenged by the students on technical grounds. The filing makes no claims about the atmosphere at San Francisco State. Nor does it cite relevant laws and rulings that the judge could find useful or rely on, as other amicus filings usually do.

Instead, it collected Open Hillel’s litany of complaints against Hillel International, in some cases nearly six years old: Hillel forbids its student groups from partnering with anti-Zionists or groups that support the movement to boycott Israel; it sets political limits on who can hold events in its buildings; it supported President Trump’s nominee for a top Department of Education post despite liberal Jewish students’ opposition.

Although it’s not explicitly stated, the implication is that even if discrimination against Hillel occurred, it is not inherently anti-Semitic since Hillel does not represent all Jews, Siegel confirmed.

Helping Judge William Horsley Orrick III see Hillel in this manner could be key to the case, which Siegel said he hoped to see dismissed.

“A lot of people… don’t really understand who speaks for the Jewish community,” Siegel said. “I don’t know where Judge Orrick fits within that broad generalization of people. We wanted him to know, just in case he was confused, that Hillel” does not represent all Jews.

That line of argument was subject to a blistering op-ed in Tablet last week by University of California, Berkeley law lecturer David Schraub. By this logic, he wrote, swastika vandalism of a Hillel might not be a hate crime since Hillel doesn’t represent all Jews, or vandalism of a Conservative synagogue might not be anti-Semitic since it doesn’t represent the Orthodox.

“There is a willful blindness here, the sort that can keep a straight face while asserting that Hillel’s exclusion from campus life has nothing to do with Jewish exclusion (as if Hillel’s Jewish character was a random coincidence ungermane to the controversy),” he wrote.

It could also have implications beyond the Jewish community, Schraub continued: “It is difficult to imagine any affinity organization satisfying the standard of uniformity Open Hillel demands. There is no African-American organization that is entirely politically inclusive of every Black man and woman, no women’s organization that fully encompasses all persons who identify as female, or Islamic group that completely embraces every Muslim.”

Even a member of Open Hillel’s Academic Council, Syracuse University professor Zachary Braiterman, tweeted that the filing meant that Open Hillel had “jumped the shark,” or conducted an unwise gimmick that portends its downfall.

Siegel had not read the Tablet article, but took issue with its central claim when it was described to him by the Forward, calling it “a very poor argument.”

“Before filing our brief, we spoke to Jewish students at SFSU who felt that this lawsuit, brought by the Lawfare Project, unfairly conflated Hillel — an undemocratic organization accountable primarily to donors — with all Jewish students on campus,” Open Hillel organizer Rachel Sandalow-Ash said in a statement to the Forward.

“Since the Lawfare Project relies on the claim that Hillel supposedly represents all Jewish students in making its case, we urge the judge to interrogate this claim,” she added.

Judge Orick will hear arguments on Wednesday as to whether the students’ case will proceed. He’ll also have the opportunity to decide whether to accept the Open Hillel amicus brief. In the meantime, both parties are also preparing for a separate trial in state court, set for next March.