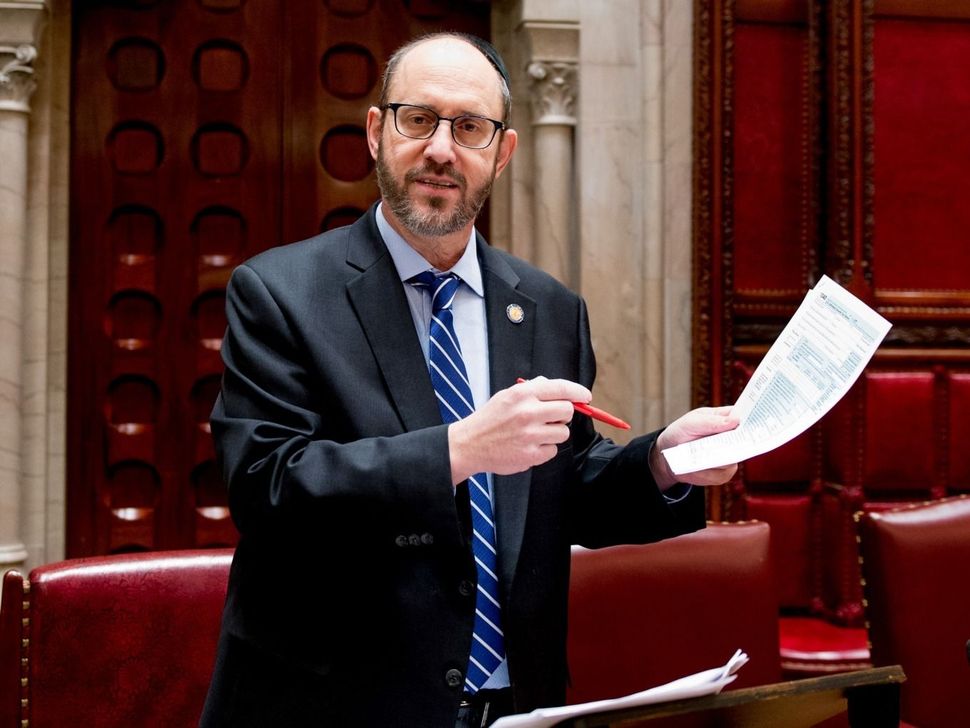 The full-page spread in the Flatbush Jewish Journal, a Brooklyn community newspaper, screamed that traditional Jewish education could be destroyed if unnamed “liberals” get their way.

The anonymous ad, which hit the streets just as observant Jews prepared to go offline for the Rosh Hashanah holiday, apocalyptically warned that yeshiva school buses, $5 million in funding for Jewish community groups and other perks could be on the chopping block.

“Sleep on Primary Day? Wake Up To A Nightmare,” the ad trumpeted.

The ad urged Orthodox voters to support state Sen. Simcha Felder in New York’s September 13 Democratic primary. Felder, who has handed control of the state senate to Republicans by siding with the GOP in the evenly split chamber, faces a tough challenge from Blake Morris, a secular Jewish lawyer and community activist.

Another anonymous online ad depicts an Orthodox man trying to open what appears to be a shuttered yeshiva.

“In just a few days we will save the future of Haredi Judaism in New York State!”

It’s still unclear who is behind the ads, which appear to violate campaign laws requiring independent political groups to state that they are responsible for ads. Felder’s campaign did not return calls for comment. 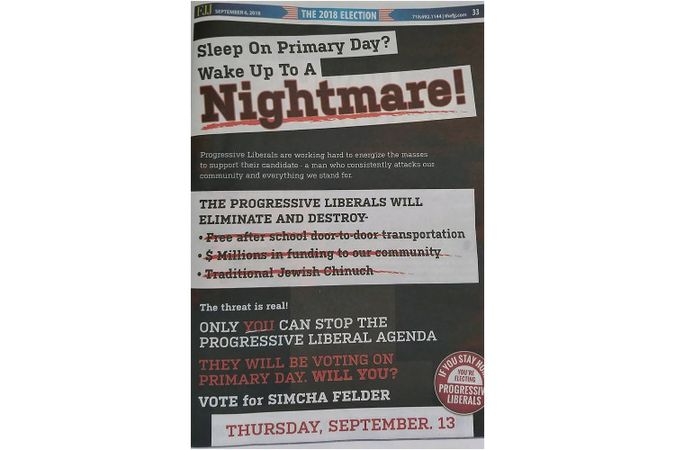 But they spotlight the unusual role that Jewish observance of the High Holidays are playing in a contentious race in which two very different types of Jews are facing off.

The primary for state offices like governor, attorney general and state assembly and senate, was switched to Thursday after Jews of all stripes objected to the normal date on Tuesday, which conflicted with Rosh Hashanah. For arcane reasons, New York Democrats and Republicans picked candidates for federal offices like the House of Representatives months ago.

What may mot have been anticipated was how holding the primary in the middle of the High Holidays could affect races involving Jewish candidates.

The pro-Felder ads hit the streets of the district, which was gerrymandered to include large Orthodox communities, just before the weekend. Instead of coming online on Saturday evening after Shabbat, most observant Jews were probably not exposed to any alternate messaging about Felder’s race until sundown on Tuesday, just 36 hours before polls open.

In the meantime, the New York Times came out with a sharply worded editorial urging voters to dump Felder.

The Gray Lady cited Felder’s siding with Republicans along with his controversial decision to hold up the entire state budget to wring concessions from party leaders to ease oversight over yeshivas’ educational standards. It also noted his idiosyncratic opposition to a plastic bag tax and speed cameras outside schools.

But it’s not clear if the editorial holds much sway in the insular Orthodox communities of Boro Park and Midwood, especially since most were occupied with celebrating the Jewish New Year.

“I’ll be honest, this community is probably not even looking at the New York Times. I don’t think anyone cares what they say,” said Moshe R., 28, walking on a rainy Boro Park street.

He added that he plans to vote for Felder because “he’s fighting for the community and knows what we need.”

Across the district in Midwood, David Goldberg, 39, said he was “sad and angry” when he saw several of the ads plastered on streets.

“I understand politics is the business of saying why your candidate is better than the other candidate,” said Goldberg, who is volunteering for the Morris campaign. “But you don’t do that by spreading uncertainty and doom.”

Whether the ads sway voters or not, watchdogs denounced them as dirty politics — and likely illegal.

“It debases the entire political discourse [and] drags down into New York local politics the sort of fear mongering that we see at the federal level,” said Susan Lerner, executive director for the New York chapter of Common Cause.

Lerner said state campaign finance laws require any person or organization making an independent expenditure supporting a candidate to first register with the Board of Elections and then clearly state on any promotional materials who paid for the communication and that it was not coordinated with the campaign.

Morris told the Forward the ad is flat-out wrong. He insisted that he is the one standing up for children in yeshivas by pushing for educational standards to be enforced.

“The state has an obligation … as a matter of public interest to have minimal educational standards,” he said.