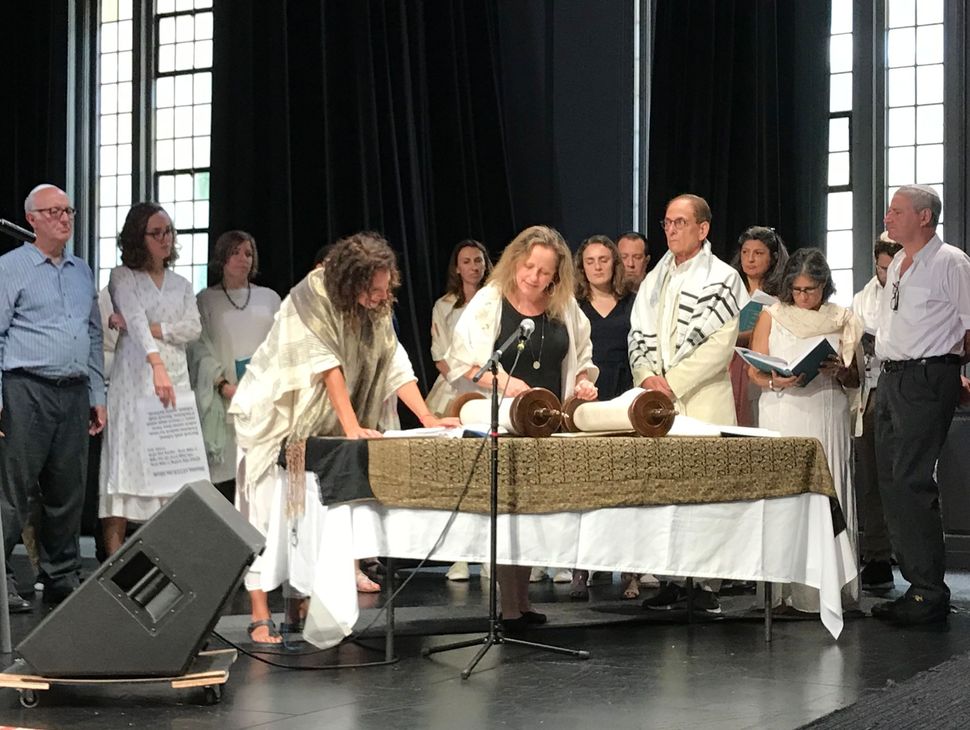 Even in Brooklyn, there are wandering Jews.

That’s how Marcella Kanfer Rolnick and Amy Abrams saw themselves in 2012. Both parents of students at the same Jewish school, the two women bonded over their shared longing for a spiritual home.

“I felt like here I was telling my kids, ‘Go to a Jewish school, yes we have Shabbat dinner, yes we go to Israel,’ but there was no time besides the High Holidays where my kids saw me really doing Jewish things,” said Abrams. “It was like do as I say, not as I do.”

Kanfer Rolnick and Abrams are both also entrepreneurs, so they quickly began thinking about trying to build their own community. On Rosh Hashanah —after six years, many iterations and much trial and error — that community celebrated a milestone. It held High Holidays for the first time, as the sister congregation of Romemu, a beloved Manhattan congregation. Their journey shows that even in synagogue-saturated New York, there are still niches that unaffiliated Jews want to occupy.

Judaism’s long history is full of DIY congregations. Various offshoots have found American soil particularly fertile. Reform Judaism has flourished here for almost 150 years; the “havurah,” or “fellowship” movement created new congregations influenced by 1960s counterculture; the 1990s saw the birth of the lay-led independent minyan movement. And some congregations have grown in the past 15 years around charismatic rabbis, like Sharon Brous and Ikar, in Los Angeles, and Romemu’s leader Rabbi David Ingber.

Such communities “bring new leadership forward, and it gives them a chance to try their stuff,” said Rabbi Lawrence Kushner, a retired Reform rabbi who is the scholar-in-residence at San Francisco’s Temple Emanu-El and the author of “I’m God; You’re Not: Observations on Organized Religion & Other Disguises of the Ego.” “That’s got to be good for the Jews.”

When Kanfer Rolnick, 46, and Abrams, 45, started out, they wanted a way to experiment with different styles of Jewish community engagement and build a network of young Jewish families in Brooklyn’s Brownstone Belt. Though both were born and raised in the Midwest, each had developed deep rolodexes of Jewish New York during their time living in Brooklyn. 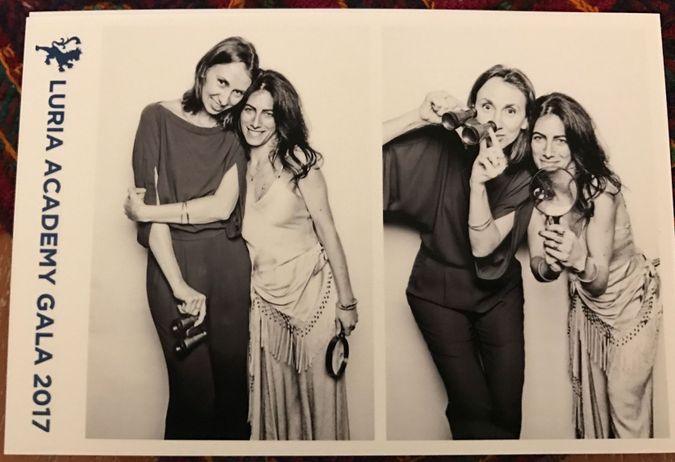 Marcella Kanfer Rolnick, pictured on the left of the photographs, and Amy Abrams, on the right, at a fundraiser for their children’s school. Image by Amy Abrams

Kanfer Rolnick is the executive chair of GOJO Industries, which was founded by her great-uncle and great-aunt, and is active on the boards of several Jewish not-for-profits. She also headed up the New York Federation’s open-ended community building effort, Imagine Jewish Brooklyn. Abrams is the co-founder of Artists and Fleas, a multi-retailer marketplace for upscale clothing, jewelry, home goods and beauty products with locations in New York and Los Angeles.

They called their latest venture Brooklyn Havurah. In 2013, Abrams and Kanfer Rolnick approached Rabbi Sara Luria, a recently ordained Reform rabbi, about being Brooklyn Havura’s resident spiritual and educational adviser. The community began as a series of potlucks that mixed and matched different elements of synagogue life.

“It was like coming together on Friday night, and singing songs, and learning together, and breaking bread and having dinner with our families,” said Luria of the community’s first few meetings. Kanfer Rolnick said that their dinners tended not to go beyond 50-70 people, including children. They met several times in a communal room in her apartment building, near Prospect Park.

Luria left the community amicably in February 2014, to focus on her own project, ImmerseNYC, which facilitates ritual immersion programs. (She now runs a separate Jewish communal project in Brooklyn.) After that, Kanfer Rolnick and Abrams began inviting well-known spiritual and song leaders — some of them personal friends — to experiment with how they wanted Brooklyn Havurah to feel: Rabbi Amichai Lau-Lavie, of Lab/Shul; the musicians Neshama Carlebach and Naomi Less; and Rabbi Zach Fredman of the New Shul.

“[W]e were a little bit fatigued of feeling like we were throwing individual events, without a sense of momentum,” said Abrams.

Then, in August of 2016, Kanfer Rolnick was speaking with Ingber, Romemu’s founder, about work he was doing with the private foundation — the Lippman Kanfer Foundation for Living Torah — that Kanfer Rolnick chairs. Ingber’s congregation is the foremost community of Jewish Renewal, a style of Judaism founded by the late Rabbi Zalman Schachter-Shalomi that incorporates meditation and music.

Marcella Kanfer Rolnick, pictured on the left of the photographs, and Amy Abrams, on the right, at a fundraiser for their children’s school. Image by Amy Abrams

“They seemed to be creating a movement, that’s grounded in Renewal, but it is really bringing musicality and vibrancy to Jewish practice,” Kanfer Rolnick said. “A light bulb went off in my head and I said [to Ingber,] ‘Growth? I know where you could grow.’”

In the spring of 2017, Kanfer Rolnick brought Ingber and about 40 members of her Brooklyn circle to her apartment for a first meeting. Rolnick says the group ultimately decided that Romemu was a good fit for their community, and vice versa.

“I had a real strong sense of trust, that she had with me and that I placed in her, that Romemu Brooklyn would be an expression of what Romemu in Manhattan has been for the past decade,” Ingber said.

Kanfer Rolnick said they launched Romemu Brooklyn with a $20,000 grant from Kanfer Rolnick’s family foundation, the Lippman Kanfer Family Foundation, part of whose mission statement is supporting Jewish communities in places where members of the family live. Kanfer Rolnick’s mother is the chair of the foundation’s board.

“It was an independent board decision, but I was able to make a strong appeal to the board,” Kanfer Rolnick said of the grant.

They held their first services as Romemu Brooklyn in March 2017 and returned to their monthly meeting format that fall. They borrowed members of Romemu’s clergy staff, and used their proprietary prayer book. They drew original members, long-time Romemu members from Brooklyn who wanted services closer to home and new recruits, all looking for the Brooklyn version of Romemu’s signature services

“In terms of its inclusiveness, its diversity, its music, it’s very much like the Upper West Side,” said Deborah Bernstein, a long-time Romemu member who recently moved to Brooklyn and now attends Romemu Brooklyn services. “But it doesn’t yet have the power or the spiritual force, because Ingber provides that.”

“I have no doubt that that will come in time,” she added.

Kanfer Rolnick said that the new community is a testament to what she sees as the future of organized Judaism: a de-centralized network of synagogues that each offer a unique experience, and which seek buy-in from members without having a high barrier to entry.

“We’re in an era where people don’t have to choose,” she said. “They can go where they want to go. This is really about what the community is responding to.”

Kushner, whose daughter Noa Kushner created the San Francisco-based community “The Kitchen,” said aspiring congregations need to prove that they’re doing something new, and not just skimping out on membership dues at established synagogues.

“The way to focus on it is, is there something that there doing that’s unique, that they figured out how to institutionalize?” he asked. 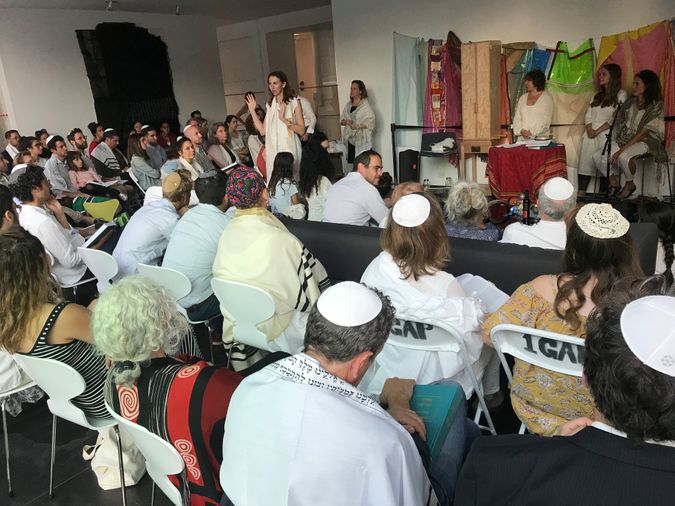 This year, Romemu Brooklyn attracted about 280 people to High Holiday services, including one day of Rosh Hashanah and all of Yom Kippur in the black box theater of the Berkeley Carroll School, near Prospect Park. Tickets for a family of four or more cost $500, while students could attend for $18. Romemu cantor and musician Basya Schechter and Rabbi Abby Sosland, a teacher at the Westchester Schechter High School, led the services.

Based on the strength of the High Holiday showing, Kanfer Rolnick said that Romemu Brooklyn plans to add one Shabbat morning service every month to its monthly Friday evening services. She said that the community is exploring how to grow; it’s unclear if they’ll hire a permanent rabbi, how they will pay for space and musicians, or how Romemu in Manhattan will share its clergy with the Brooklyn outpost.

But for members like Bernstein, figuring out what the future holds is the whole appeal.

“You don’t get that many opportunities to influence the direction of where [a new community] is going to go,” Bernstein said. “That’s a rare treat.”

Correction, 10/15/18, 10:30 a.m. — A previous version of this article stated that Brooklyn Havurah received a grant from Kanfer Rolnick’s family foundation. Romemu Brooklyn is the group that received the grant. Additionally, the article previously stated that Romemu Brooklyn’s first meeting was in August 2017. It was in March 2017.

Ari Feldman is a staff writer at the Forward. If you have any leads on exciting and emerging Jewish communities, contact him at [email protected] or follow him on Twitter @aefeldman