Ikar Is Building Something. Just Don’t Call It A Synagogue. 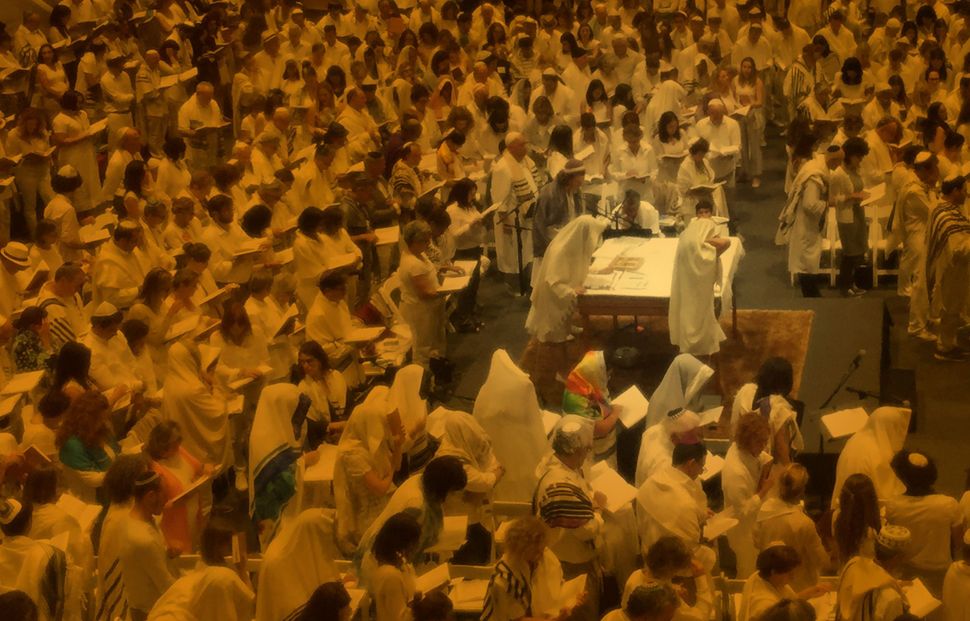 The Los Angeles congregation Ikar likes to break the unspoken rules of American Judaism. It does not call itself Conservative, Orthodox or Reform. It doesn’t even call itself a synagogue, because it has no permanent home. It holds services — known for their drum circles and packs of roaming children — in rented auditoriums and classrooms.

Now Ikar — whose name roughly translates as “essence” — is planning to defy another taboo. It recently announced that it is going to construct its own building, from scratch, on a piece of property in Los Angeles’ Midtown area. To raise the necessary cash, Ikar is planning to do something rare: Get donors from coast to coast to help fund a building they don’t even go to. From renting to owning, from local presence to national — will the Ikar of the future hold onto the unconventional approach to Judaism that made it so beloved in the first place?

“We don’t want to build another shul,” said Melissa Balaban, Ikar’s executive director. “There are plenty of those. We want to build a place for innovation.”

Ikar was founded by in 2004 in a Santa Monica living room by Balaban and some two-dozen other people, including Ikar’s current senior rabbi, Sharon Brous. Brous was ordained at the Conservative movement’s flagship Jewish Theological Seminary. Yet with Ikar, Brous created a community that’s atypical for the movement. Shabbat and holiday services are accompanied by drum, and Ikar has a band for certain other prayer services, which is unusual for a Conservative synagogue. Until recently, the synagogue’s board was loosely structured with overlapping responsibilities and self-imposed term limits — a sharp contrast to the administrative focus of the United Synagogue of Conservative Judaism.

Buoyed by Brous’ growing national profile, Ikar has an outsize influence for its size. It has 640 households — meaning it’s smaller than roughly a sixth of Reform and Conservative synagogues — but enjoys the name recognition of much bigger institutions, like Central Synagogue in New York and Sinai Temple in LA. That still makes it one of the largest unaffiliated synagogues in the country, according to Steven Cohen, a professor of Jewish social policy at Hebrew Union College-Jewish Institute of Religion in New York. Cohen said that the synagogue is most influential as a leader of the “independent minyan” phenomenon, a loose coalition of prayer communities across the country that eschew movement affiliations. With a new building, Ikar is looking to further establish its place in the “wider Jewish conversation,” Balaban said.

“Can they continue to be an upstart if they have a building?” said Michael Berenbaum, a development consultant for museums and a professor of Jewish studies at the American Jewish University in Los Angeles. “[A]re you the same radical when you have a mortgage? It will be interesting to find out.”

Ikar has said that it has been looking for a building “since pretty close to Day One.” But the search did not begin in earnest until 2012, when it found a major donor to begin a capital campaign for a new building, and raised “seed” funding of about $500,000.

The community received an extra push in the form of the so-called “Trump bump” in attendance at synagogues. Matt Weintraub, Ikar’s associate executive director, credited the election with providing some fuel to the synagogue’s fundraising efforts.

“As a result of the political climate, membership has grown,” said Weintraub. He said that the synagogue has received larger donations from more of its members and seen the number of donors to the synagogue increase over the past year.

In January, it bought the piece of land in Midtown for $7 million.

Ikar hopes its new building will do a lot to help the congregation keep its quirky vibe, even as it settles down in a permanent home. Brous told the Forward she hopes the building will have an outdoor café and an urban garden, as well as LEED certification for being energy efficient. In a city that doesn’t have many public parks, Brous said that the building could serve as a hub for the synagogue’s neighborhood, which includes African, Korean and Bangladeshi enclaves. Brous also wants to build a recording studio that Ikar’s musical director, Hillel Tigay, can use for committing their eclectic musical services to tape. Weintraub said the synagogue plans to have focus groups to solicit suggestions for the new building from congregants.

Most of the members are excited about Ikar’s next phase, said Sarah Benor, an Ikar member and a professor of Jewish studies at HUC-JIR in Los Angeles. But there are some who are concerned that an expensive new building with high upkeep costs could make the community less innovative.

“The concern with a building is, what started out as innovative and interesting, as it ages it loses that edge,” said Ingrid Steinberg, who has been a member of Ikar for over 10 years. “It becomes settled, and becomes something very stable but in a boring way.”

To that end, Steinberg said, she supports Balaban and Brous’ big-tent approach to planning the building. The only catch is whether they can gather the requisite cash.

Balaban declined to give a budget for the project, and said they were still in the process of selecting an architecture firm to design the building.

To fund the shul that isn’t a shul, Balaban said, they’re searching for donors of all backgrounds: non-Jewish Angelenos, non-Angeleno Jews and philanthropists who share Ikar’s interests in interfaith coalitions and local activism.

That will make this an unusual capital campaign, said David Katowitz, a private consultant for synagogues who previously worked as a fundraiser for the Union of Reform Judaism. Katowitz said it was rare for synagogues to seek outside funding — especially for a building.

“It’s going to be a challenge,” Katowitz said. “It will be harder to ask someone who’s not involved with the day-to-day, outside LA, to give a big gift to support the building.”

Berenbaum speculated that Jewish donors outside the Ikar community might be attracted to the community’s unique approach to synagogue life. Cohen, who said he attends Ikar services when he is in Los Angeles, suspects that the membership is largely made up of people with strong backgrounds in movement-affiliated settings like day schools and summer camps. Ikar, like some other independent minyans, also attracts members who are shomer Shabbos — they don’t use electricity or money on the Sabbath — despite making liberal use of instruments during services, something most often found in Reform settings.

“I think it’s appealing to Jews who have not found institutions appealing,” Berenbaum said. “Ikar may be able to fundraise nationally by saying that they’ve discovered the secret of appealing to affiliated Jews.”

If Ikar hopes to get support from donors outside the Jewish world, Cohen said, Brous’ status as an icon of religious activism will be doing the heavy lifting.

In recent years Brous has gone from being a leading rabbi to being a national faith leader. Her 2016 TED Talk, “It’s time to reclaim religion,” has been viewed over a million times. She has also made headlines for her activism. In July 2017, she was arrested in Washington, D.C. for protesting Republican efforts to replace the Affordable Care Act. In April, she was invited to give a blessing at the opening of The Legacy Museum in Montgomery, Alabama, which is dedicated to the victims of lynchings in the U.S.

“She’ll be supported by very talented and well connected lay leadership,” Cohen said. “But without her as a symbol that campaign wouldn’t succeed. She’s the essential part of it.”

Despite criss-crossing the country in the name of social justice, Ikar members say that Brous still hews closely to the model of a community rabbi.

“I haven’t heard anyone complain about her not being available enough,” said Benor. “It’s amazing that she’s doing some national thing one day and the next day she’s at your kid’s bar mitzvah.” 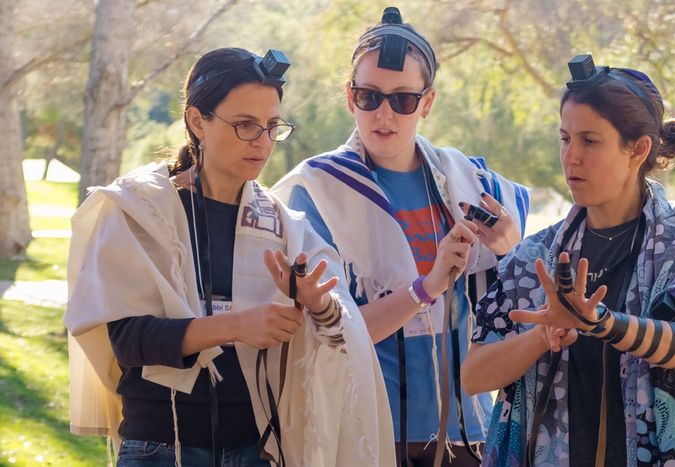 Rabbi Sharon Brous (left) with Ikar congregants at a 2016 retreat. Image by Courtesy of Ikar

On May 17, Ikar had its annual fundraiser, which according to Benor is usually called “Night of the Wandering Jew” but this year was called “Party With A Purpose.” Balaban said that the community hit their fundraising goals for the evening.

Benor wondered, however, if the fundraiser didn’t show that Ikar is already becoming more synagogue-like. On the one hand, she said, it had quirky elements like a vegetarian spread and a speakeasy theme. (The password to enter was “resist.“) But unlike in past years, attendees could buy ad space in a booklet honoring two Ikar members who are moving to New York — a classic fundraising method — and the tables had assigned seating.

Benor said the booklet in particular could be “evidence of a shift in culture” — not necessarily a bad thing, if they want to fund a state-of-the-art un-synagogue.

“It was the right move,” Benor said.

Ikar Is Building Something. Just Don’t Call It A Synagogue.