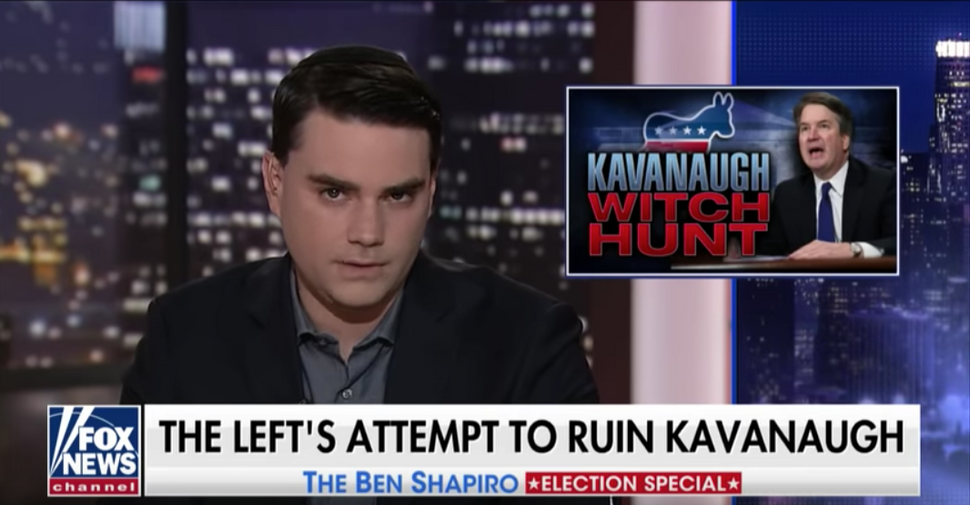 A clip from “The Ben Shapiro Election Special.” Image by Fox News Insider/YouTube

Ben Shapiro wasn’t satisfied with having one of the most downloaded podcasts in America, a nationally syndicated radio show, millions of followers on Facebook and Twitter, a website quickly growing to be one of the most prominent in the American conservative ecosystem and sold-out lecture halls whenever he visits college campuses.

Now, at age 34, he also has a weekly show on the Fox News Channel. And his first show on September 23 was perfectly suited to catch the wave of conservative outrage against the treatment of Supreme Court nominee Brett Kavanaugh.

Nearly 1.8 million people watched the second episode of “The Ben Shapiro Election Special” last Sunday, according to Nielsen — more than double the viewers at the same time on MSNBC, quadrupling CNN and, most importantly, up 11% from the first episode in the 25-54 demographic that advertisers crave. The show is scheduled to air weekly through October 14.

While he has been sure to be respectful to Christine Blasey Ford, the woman accusing Kavanaugh of sexual assault, he has also accused Democrats of abandoning basic principles of fairness in pursuit of stopping a judge they oppose. “The manipulative way Democrats have played this entire scenario suggests that this is a political hit, pure and simple, at least from their viewpoint,” Shapiro said in the opening of his first episode.

Two years after an acrimonious split from Breitbart News left him reeling, Shapiro is now a fixture at the top of the conservative media world, and possibly being groomed for future stardom by Fox, which President Trump is known to watch incessantly.

And while many liberals have condemned Shapiro for his opposition to transgender rights, unapologetic support for Israel and willingness to shill dietary supplements with questionable medical benefit, among other things, his approach to the Kavanaugh controversy has won him some admirers from surprising corners.

“I would venture to say that that’s why he’s so exciting for conservatives, and that’s why people are responding to him, is that he is thinking through this more thoroughly,” Code Pink national director Ariel Gold, who appeared on his show on Sunday, told the Forward.

Though Shapiro has worked as a pundit literally since childhood — he had a syndicated newspaper column at age 17 — his fame has skyrocketed in the past year as a leader of the so-called “Intellectual Dark Web,” whose members have different views towards the president and his policies (Shapiro has said he’s “Sometimes Trump,” not “Never Trump”) but share a hatred of political correctness. Members of the movement have been criticized for their associations with the “alt-right,” though Shapiro, an Orthodox Jew who wears a kippah, was the American journalist who received the most anti-Semitic tweets in all of 2016, according to the Anti-Defamation League.

Confronted with multiple allegations that Kavanaugh engaged in sexual assault during high school and college, Shapiro’s response has differed from the more extreme reactions of many fellow conservative pundits.

Some “Never Trump” Republicans, like CNN commentator Ana Navarro, have said that Trump should withdraw Kavanaugh’s nomination and replace him with someone equally conservative but without the stench of sexual misconduct allegations.

But many others have demanded that the nomination be approved regardless, with some claiming that Kavanaugh’s accusers were making things up and others trying to characterize reports of Kavanaugh’s actions as acceptable, typical behavior. After The New York Times reported that police questioned Kavanaugh in connection with a bar fight while in college, Newsmax TV co-host John Cardillo tweeted, “I don’t know one guy, including myself, who wasn’t in a bar fight. Not a single one.”

Shapiro, by contrast, has tried to thread the needle. He has written that although he felt there were inconsistencies in Ford’s testimony to the Senate Judiciary Committee, overall, as he wrote in Newsweek, he found her “compelling and credible.”

But, he added in that column, “Kavanaugh was just as compelling and just as credible.” Arguing that Ford has not been able to corroborate her claim that Kavanaugh assaulted her, Shapiro, a Harvard Law School graduate, has couched his concerns as a defense of due process.

“The real issue here is guilt and innocence,” he said in the opening monologue of his first episode. “And in the end, for Democrats and many in the mainstream media, innocence doesn’t matter; social justice does. Justice, normal justice, is about guilt and innocence. It’s about whether you did the thing people accuse you of doing. Justice doesn’t need a modifier. Add social justice, and the picture changes.”

At the same time, noted Gold, “He has said that if in fact it’s proven true, that it is grounds to disqualify from the Supreme Court, and that’s something that isn’t the main position or only position on Fox News.”

Gold participated in a discussion with Shapiro and two other panelists on Sunday night, when they discussed the Ford-Kavanaugh hearing and the new FBI investigation, among other subjects. When the panel turned to Yale Law School’s cancellation of classes to protest Kavanaugh, Gold retorted, “I am thankful that we live in a country that still values dissent and protest. That’s much more than we can say right now about the apartheid state of Israel.”

“Woah,” Shapiro responded. “Not sure where that came from. That’s a lie. But I think we’ll save that lie for another time, since we actually have other topics to get to. Suffice to say that Muslims in Israel have more rights than Muslims anyplace in the Middle East by a long shot. Let’s go to the next topic: Kanye West got booed after going on a pro-Trump rant on ‘Saturday Night Live’ last night….”

Asked why she appeared on a show with someone whose politics are so different from hers, Gold responded, “I consider it an opportunity to speak with someone who is very important voice on this issue. I think his positions are extremely problematic and quite frankly racist, but he is a voice that is listened to on this. My goal is to talk to him about this and see if he still has the same positions as some of the same things he’s stated — that Palestinians should all be relocated to Jordan — and try to have a conversation with him about this.” (Shapiro argued in 2003 that Israel had the right to “transfer the Palestinians and the Israeli-Arabs from Judea, Samaria, Gaza and Israel proper.”)

But still, Shapiro is not an expert on elections or polling, so why is he headlining a show billed as an “election special”?

“This is clearly Fox giving a test-run to Shapiro, who the network likely sees as capable of expanding its audience beyond its senior-citizen core,” Simon Maloy of the liberal website Media Matters wrote when the show was announced. He added in a review of the first episode that Fox hoped to “audition Shapiro as a replacement Sean Hannity.”

Indeed, given multiple reports of tension between Hannity and Fox News leadership, we may be seeing Shapiro on our TV screens every night, and sooner than we think.