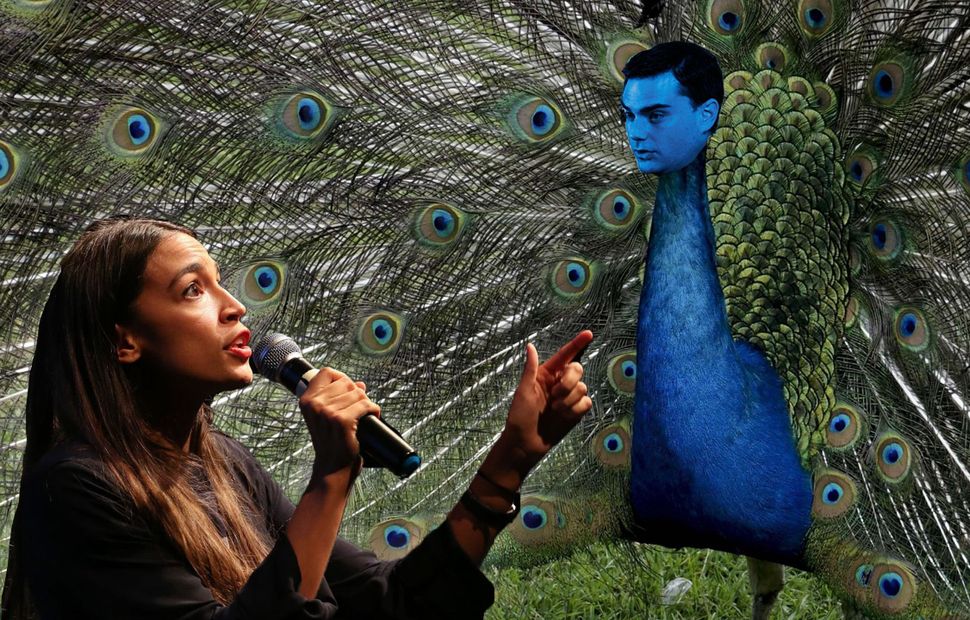 Ben Shapiro wasn’t cat calling Ocasio-Cortez, but he sure was peacocking. Image by Forward Montage

To a certain kind of man, a woman’s worth is calculated by how much attention she’s giving him.

On August 8, in a 49 second video that’s been watched over half a million times, right-wing pundit Ben Shapiro begged Democratic Congressional candidate for NY-14 Alexandria Ocasio-Cortez to appear on his Sunday night talk-show.

The video is dripping with Shapiro’s signature sacharine sarcasm: He notes that Ocasio-Cortez has been heralded as the future of the Democratic Party, and adds, “I’m really excited that you’ve been elevated to that position!” Shapiro offers a $10,000 donation to her campaign if she’ll agree to debate him on his show. With faux-generosity, he offers Ocasio-Cortez to “really probe your belief system.” The video ends with an all-caps appeal, written in Impact, the font popularized by its use in internet memes: “SHAPIRO VS. OCASIO COMING IN 2018…PLEASE?”

The next evening, Ocasio-Cortez dared to point out that this stunt, and subsequent appeals by other members of The Daily Caller, is brutish.

Just like catcalling, I don’t owe a response to unsolicited requests from men with bad intentions.

And also like catcalling, for some reason they feel entitled to one. pic.twitter.com/rsD17Oq9qe

Discussion and debate are not “bad intentions.” Slandering someone as a sexist catcaller without reason or evidence does demonstrate cowardice and bad intent, however. https://t.co/kYaYuf0W43

Shapiro is partially right — he wasn’t acting like a sexist catcaller, with nothing to offer but an unwanted wink and a grin. Rather, like a businessman dangling a crusty $100 bill at an exhausted female bartender, he’s peacocking for a woman who wants nothing to do with him.

Catcalling has never been about sex — it’s a cry for dominance and attention, an attempt to get a woman to stop what she’s doing and acknowledge you. By loudly announcing that they find someone physically attractive, catcallers aren’t actually imagining that they’ll get lucky — the thrill is in making a woman blush, in making her uncomfortable, in eliciting fear, anger or embarrassment. When peacocks display their plumage, they’re hoping for more — in Shapiro’s case, a lucrative T.V. special — but it’s about dominance and attention all the same.

Shapiro claims he’s only “asking for a discussion or debate,” and that he doesn’t have bad intentions. Given that, fewer than two weeks ago, he spliced a “satirical” interview making fun of Ocasio-Cortez, and given that he responded to news of her securing the Democratic nomination with a gif of Will Smith screaming into the camera, this claim lacks credibility.

Even assuming Shapiro’s intentions are pure, Ocasio-Cortez doesn’t owe him the time of day. Shapiro is not running against Ocasio-Cortez, he’s not a resident of New York and I’d wager that the overlap between the people Ocasio-Cortez represents and Shapiro’s audience is virtually nonexistent. Shapiro’s interviews aren’t earnest fact-finding missions — they’re attempts to “own the libs.” What good does it do for the people of NY-14 for Ocasio-Cortez to argue with a “gotcha” troll? If Shapiro fancies himself a journalist, it’s odd that he’d want to debate Ocasio-Cortez in the first place — journalists typically interview potential members of Congress rather than debating them.

Should Ocasio-Cortez have dignified Shapiro’s publicity stunt with a response? Perhaps not. But the backlash to her saying “no” perfectly illustrates what women already know: there’s nothing peacocks love more than attention, and being acknowledged in any form is just another feather in their cap.