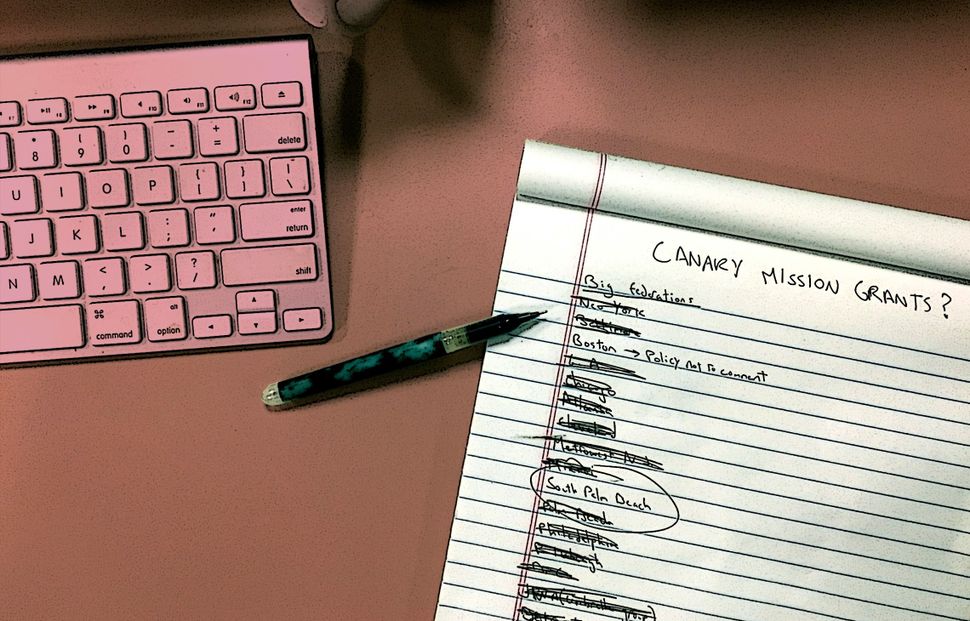 A second major U.S. Jewish charity has acknowledged to the Forward that it funded the Israeli charity that appears to run Canary Mission, the online blacklist of student activists that the Israeli government has used to interrogate and detain U.S. citizens.

Between November of 2016 and September of 2017, the Jewish Community Foundation of Los Angeles, one of the largest Jewish charities in the country, made a series of grants totaling $250,000 to Megamot Shalom, the Israeli not-for-profit organization that the Forward has identified as the likely operator of Canary Mission. The foundation now says that it will not fund Megamot Shalom in the future.

Canary Mission operated in absolute secrecy for three years while posting political dossiers on more than a thousand undergraduates, most of them involved in pro-Palestinian activism. The site says that it intends to damage the students’ job prospects. The Forward has reported that Israeli border guards reference Canary Mission during interrogations, and in October, Haaretz showed that the Israeli government had cited a Canary Mission dossier in an official document used to bar a U.S. student from entering Israel.

The Los Angeles foundation is now the second major U.S. Jewish charity linked to Canary Mission, following a report last week in the Forward that a foundation controlled by the Jewish Community Federation of San Francisco, another of the largest Jewish charities in the U.S., made a $100,000 grant to support the website in 2016.

Evidence is now building that major Jewish institutions with hundreds of millions of dollars in assets, and boards of directors that include prominent members of the U.S. Jewish community, have played a significant role in bankrolling the site.

Two other large Jewish charities, the New York City-based Jewish Communal Fund and the Jewish Federation of South Palm Beach County, declined to respond to specific questions about whether they have funded Canary Mission.

In addition to tying the Jewish establishment to a hardline attack on pro-Palestinian students, these revelations suggest that some large Jewish organizations are exercising little oversight over grants made using financial instrument like donor advised funds and supporting foundations, which they offer in order to provide tax benefits to wealthy donors. All of the known grants to Canary Mission went through such vehicles, which allow donors to suggest grants to be made with funds that the charities legally control.

“A lot of people in the federation world shake their heads at the supporting foundations and the level of oversight over grant-making that the federations are exercising,” one federation official, who asked not to be named to discuss sensitive issues, told the Forward.

The grants from the Los Angeles foundation to Megamot Shalom were made at the advice of a donor whose identity the foundation would not disclose. They were made through the foundation’s donor advised fund, a philanthropic device that allows wealthy individuals to park assets at the charity. While donors to a donor advised fund can suggest how their gifts should be used, the assets belong to the charity, and the charity must approve all grant recommendations.

The Forward has not received a response to questions it asked the Los Angeles foundation to submit to the donor.

The foundation, which has net assets of $726 million, operates a large donor advised fund and controls more than three dozen other supporting organizations, many of which have millions more in assets. It has historical and institutional ties to the Jewish Federation of Greater Los Angeles, the central Jewish fundraising organization in Los Angeles. Though the two organizations are located in the same building, they have separate boards of directors and separate management.

The foundation said in a statement that, following the Forward’s inquiry, there would be “no further distributions to Megamot Shalom at this time.”

Little is known about Megamot Shalom, or “Peace Trends.” An Israeli not-for-profit organization, it was virtually unknown until early October, when the Forward first connected it to the Canary Mission website. The address that Megamot Shalom has on file with Israel’s charity registrar is a uninhabited-looking building in Beit Shemesh, a city near Jerusalem.

Megamot Shalom’s own filings with the Israeli charity registrar closely match the operations of Canary Mission. The organization says in its filings that its mission is to use digital media to protect the image of the state of Israel against the boycott, divestment and sanctions movement. As of the end of 2016, it employed a dozen people; staff have included an editor, a writer/researcher, and a social media specialist.

The Forward asked the fifteen largest Jewish federations in the U.S. whether they had funded Megamot Shalom or Canary Mission, either directly or through an intermediary like the Central Fund of Israel, a New York-based charity that has routed funds to Megamot Shalom.

U.S. charities are not required to identify the recipients of foreign grants in their public tax filings. Since Megamot Shalom is based in Israel, its name would not necessarily appear in the publicly available records of a U.S. charity that had sent it money.

Here’s the actual question I sent around. I gave them some time to get back to me, so don’t expect all the responses today. pic.twitter.com/GjhZcaDEe4

The large federations, which raise and disburse charitable gifts collectively for their local Jewish communities, each have annual budgets that can reach into the hundreds of millions of dollars, and often sit at the center of a network of related charities and supporting foundations. Thirteen of the largest federations, based in cities including New York, Chicago, Cleveland, and Atlanta, told the Forward that they had not funded Canary Mission.

Another federation, Combined Jewish Philanthropies of Greater Boston, said that their policy was not to comment on grants made through their donor advised funds. A review of the Boston federations’ tax filings suggests that it is highly unlikely that the organization funded Canary Mission. Megamot Shalom does not appear in its tax filings; it made no grants to the Central Fund of Israel; and it made very few grants overseas. Its supporting foundations are focused on local causes.

The Jewish Federation of South Palm Beach, however, was far less transparent. The organization would not comment on how the donor advised funds it manages had disbursed their grants, and the charity has withheld key information in its public tax filings. While the Internal Revenue Service’s tax forms require that charities list the recipient of each grant they make inside the U.S., the South Palm Beach federation does not do so. Instead, in its most recent tax filings, it reported a grant of $2.3 million to “various grants and allocations – available upon request.” It reported a similar disbursement in the prior tax year for $2.4 million.

The Forward made that request multiple times, but the South Palm Beach federation did not respond, and would not say whether any of those undisclosed grants had benefited Canary Mission, either directly or indirectly. “It is our practice and good governance to refrain from commenting on philanthropic disbursements from our Donor Advised Funds,” Matt Levin, the federation’s president and CEO, wrote in an email.

In addition to asking large federations if they had supported Canary Mission, the Forward put the same question to the Jewish Communal Fund, a New York-based Jewish charity similar in structure to the Jewish Community Foundation of Los Angeles. It operates a major donor advised fund, and is possibly the largest Jewish charity in the U.S., with assets of more than $1.5 billion. The organization did not respond to multiple queries about whether it had supported Canary Mission.

In both 2016 and 2017, the Jewish Communal Fund made grants of $1 million to the Central Fund of Israel. The Central Fund serves as a conduit for U.S. grants to hundreds of Israeli charities, including right-wing and extremist groups, and was used by the San Francisco federation’s supporting foundation to send money to Megamot Shalom.

The Jewish Communal Fund did not respond to a question about whether any of the grants it had made to the Central Fund had been earmarked for Megamot Shalom.

As the popularity of donor advised funds has grown massively across the U.S. philanthropic spectrum in recent years, major Jewish institutions have followed suit. Along with so-called supporting foundations, which are stand-alone family charities officially controlled by a parent organization, they now make up a substantial proportion of the assets controlled by the Jewish communal establishment.

The arrangements offer significant tax advantages to the rich. Jewish communal officials value them as a way to build relationships with wealthy donors, keeping them in contact and opening an avenue to hit them up for support.

A person who advises federations on fundraising issues, and who asked not to be named in order to freely discuss sensitive matters, said that federations fear losing business to the non-Jewish donor advised funds, controlled by major investments firms like Fidelity and Vanguard, which impose no ideological restrictions on the grants they will approve.

I sent these emails around four hours ago and already have a few responses. The federations in Atlanta, Cleveland, Philadelphia, and Pittsburgh all wrote to say that they have not funded Canary Mission. pic.twitter.com/akcjZsGmA5

Some federations and community foundations have placed limits on which organizations can receive grants from their donor advised funds and supporting foundations, though those rules have been unevenly enforced. In 2010, the Jewish Community Federation of San Francisco adopted guidelines that ban grants to groups that endorse “bigotry, violence or other extremist views,” or groups that participate in the BDS movement. Yet it now says that it strengthened “the implementation” of those guidelines in 2017, and in the process banned grants to the Central Fund of Israel, which its supporting foundation used in 2016 to send money to Canary Mission.

A federation official, who asked not to be named to discuss sensitive issues, told the Forward that the Central Fund of Israel is “generally not a preferred partner” for Jewish federations. Yet that didn’t stop either the grant from the San Francisco federation’s supporting foundation to the Central Fund in 2016, or the New York’s Jewish Communal Fund’s $1 million grant to the organization in 2017.