For Jewish Children Of Color, Finding Friends Like Them Is A Revelation 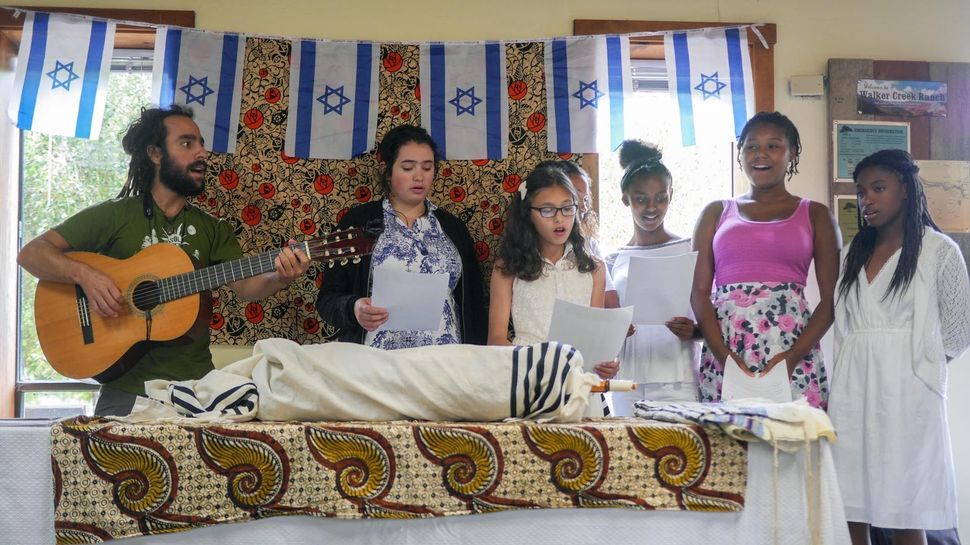 Aliza Hausman is a mixed-race Dominican Jew, and will do whatever it takes to secure a playdate for her son. She recently got up the nerve to approach a Japanese woman in the lobby of her son’s Modern Orthodox day school in Los Angeles.

Depending on how the researcher defines the term, people of color represent between 7% and 20% of American Jewry. According to the Pew Research Center, 7% of Jews describe themselves as black, Hispanic or of a different racial background. Be’chol Lashon, a group that promotes racial and ethnic diversity in Judaism, puts the number at a fifth of the broader population, because it defines “racially and ethnically diverse” Jews as essentially all Jews not solely of Western and Eastern European heritage.

But because these Jews remain a minority in many communities, parents must work hard to find friends for their children who are also racially and ethnically diverse. It’s a way to encourage kids to explore both their Jewish and their racial heritages at once, and show them that their Jewish identity belongs as much to them as it does to anyone.

“For a kid who’s Jewish and black, both identities are indelible,” said Nancy Sheftel-Gomes, a Jewish educator in San Francisco whose children are biracial. “Neither is something that you can take away from them.”

Hausman, who keeps a blog called “Memoirs of a Jewminicana,” says that she has received emails from Jewish woman of color around the country complaining about how white their Jewish community is.

“Their child doesn’t have a friend that looks like them, and it’s hard for them,” Hausman said.

To combat that problem, Be’chol Lashon runs a summer camp for racially diverse Jewish children outside San Francisco. This past August was their eighth session, and nearly 30 campers attended; the camp is now seeing its first cohort of campers starting college this year. 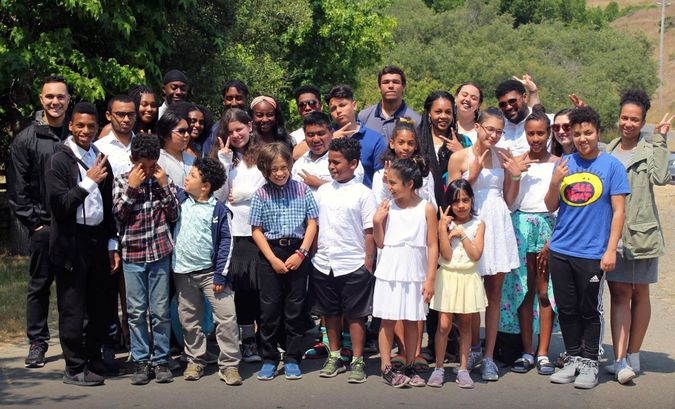 Sheftel-Gomes’ grandchildren have attended the camp. Her husband is Cape Verdean, and her grandchildren are biracial. She says her older granddaughter calls the camp “her happy place.” Sheftel-Gomes said she wishes the camp had been around when her children were young, so they could have had other role models for being both black and Jewish.

“It’s … hard to instill a Jewish identity in a child whose 97% Ashkenazi. We’re all Jews by choice,” Sheftel-Gomes said. “But, when you’re a Jew of color, it’s a whole other thing.”

Chaya Murrell, of Passaic, New Jersey, also says she has been trying to find Jewish children of color for her son Ammitai to be friends with. Chaya’s husband, Luis, is black, and she says that Ammitai only realized fairly recently that he looks different from all the other the children in their Modern Orthodox synagogue. In July, she posted in a popular women’s Facebook group, looking for playdates with Jewish kids of color in the Passaic area, but it didn’t go anywhere.

When Murrell dropped Ammitai off for the first day of kindergarten this year, they were both unexpectedly greeted by another family — in Hebrew. A father and his son, both black, and both wearing kippahs, approached them. 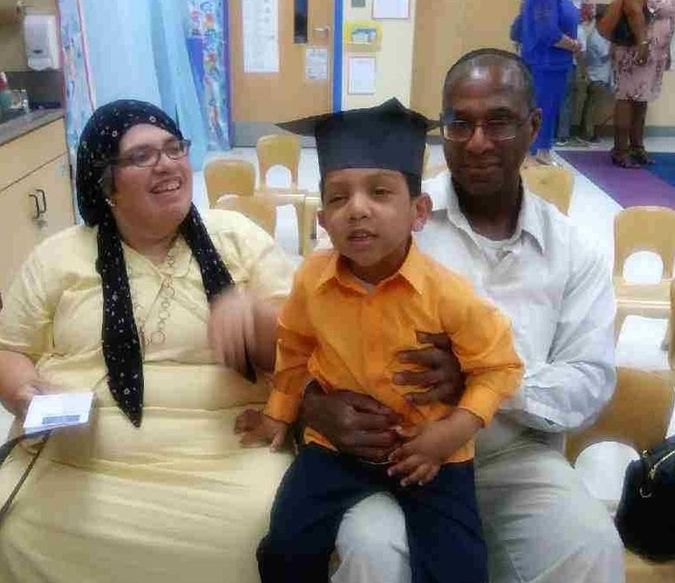 “Ammitai says to me, ‘Oh look, their abba [dad] looks like my abba,” Chaya Murrell said. “I was, like, a little embarrassed.”

But Ammitai and the boy, David, hit it off. Murrell says that when she picked Ammitai up that afternoon, he told her, “Now I have a friend that looks like me.” The Murrells invited David and his parents to their home for Sukkot in September.

Likewise, Jared Jackson says that he has purposefully surrounded himself with Jewish families that are “heritage-diverse” — i.e., Jews who come from many different ethnic, racial and cultural backgrounds — in part so that his son, age two, will grow up in a community where diversity itself is “normative.”

Jackson, who refers to himself as a multi-heritage Jew, founded Jews In All Hues, a non-for-profit in Philadelphia that promotes diversity consciousness in the Jewish world.

Yet both he and Hausman say that, though it’s important for kids to have friends who are Jews of different heritages, there are other elements of friendship to learn as well.

“I want to make sure that the human connections are there before we talk about heritage, especially since we’re talking about kids,” Jackson said. 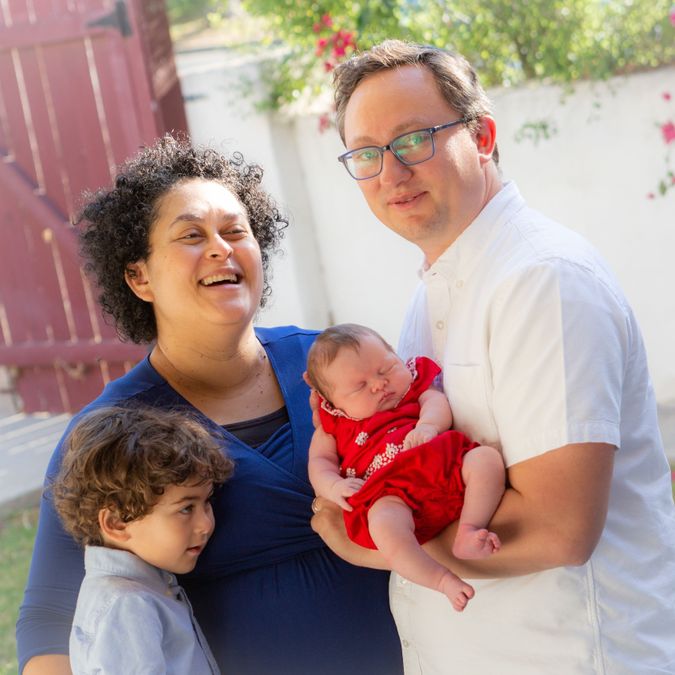 Aliza Hausman with her family. She says that she and her son are “Persian-passing” in LA’s heavily Sephardic and Mizrahi Orthodox community. Image by Aliza Hausman

For other parents, the playdates aren’t as important as how the child’s twin identities are nurtured together in the family.

“The reinforcement comes from your faith institution, your school, other community events,” said Yolanda Savage-Narva, the executive director of Operation Understanding D.C., a not-for-profit in Washington, D.C. that promotes black-Jewish relationship building. “But that primary identity piece is something I think that is really grown and cultivated at home.”

Savage-Narva, who is black and was raised in Mississippi, does this by weaving her heritage in with Jewish observance: She hosts a “black unity” Passover seder, and puts deviled eggs on her seder plate. She also likes to cook pots of kosher gumbo. She says it’s made a big difference for her son.

“He talks about being both black and Jewish, and makes sure that if there’s a way for him to talk about his identity, that he embraces both,” Savage-Narva said.

But for young children like Ammitai, finding a friend with double identities like theirs can still be an exciting way feel “both.” Murrell says that since their playdate, Ammitai can barely talk about anyone besides David, the boy who looks like him.

“Now when I ask him, ‘Who you do you want to have over for Shabbat?’ he says, ‘David,’” Murrell said. “Everything is David now.”

For Jewish Children Of Color, Finding Friends Like Them Is A Revelation