‘All These Jews Must Die’ Gunman Kills 11 In Pittsburgh Synagogue 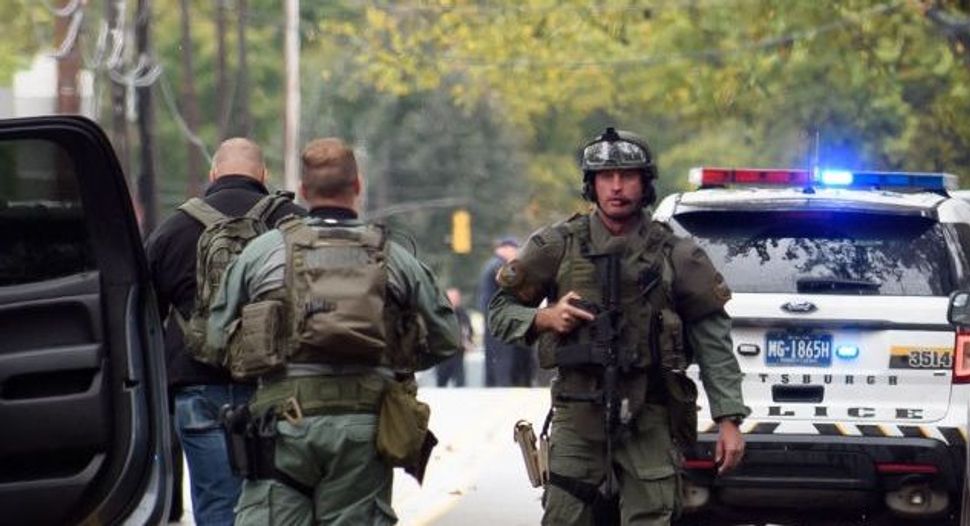 A gunman shouting “all these Jews must die” killed at least 11 people and wounded several others at a Pittsburgh synagogue during Shabbat services Saturday morning before being captured alive.

In what is thought to be the first-ever mass shooting at an American synagogue, a “bearded heavy-set white male” identified as Robert Bowers, 46, walked into the Tree Of Life synagogue in the leafy Squirrel Hill neighborhood around 10:30 and opened fire. Along with the fatalities, the gunman also shot and wounded three police officers.

The shooter left a scene of total carnage behind — and a social media feed filled with hatred against Jews and immigrants.

“It’s a very horrific crime scene — one of the worst that I’ve seen, and I’ve been on some plane crashes. It’s very bad,” said Pittsburgh public safety director Wendell Hissrich.

Bowers, a 46-year-old white man, surrendered to a SWAT team on the scene. He spewed hate against Jews during the shooting and the Jewish pro-immigration group HIAS.

“HIAS likes to bring invaders in that kill our people,” Bowers wrote on social media. “I can’t sit by and watch my people get slaughtered.”

“This falls under hate crime,” Hissrich said, adding that the shooter had been taken to a hospital. The Federal Bureau of Investigation will lead the probe into the attack.

President Trump denounced the violence but suggested the shooting could have been prevented if the synagogue had stiffer security. He said lax gun laws played no role in allowing the shooting.

“If they had some kind of a protection inside the temple maybe it could have been a much more different situation,” he said.

The president says the problem is a lack of armed guards inside a house of worship https://t.co/xBTtuTM6wR

The synagogue was holding a shabbat service that started at 9:45 a.m., according to the organization’s website. Sam Schachner, president of Tree of Life, said in a phone call he had no comment at this time.

Michael Eisenberg, former president of the synagogue, told KDKA that police were normally only present at the synagogue for security on high holidays.

“On a day like today, the door is open, it’s a religious service, you can walk in and out,” he said.

Jonathan Greenblatt, CEO of the Anti-Defemation League, called the shooting an “anti-Semitic attack.”

Jeff Finkelstein, CEO of Jewish Federation of Greater Pittsburgh, told reporters that on a typical Saturday morning about 50 or 60 people worship at Tree of Life Synagogue. The Squirrel Hill area is a heavily Jewish neighborhood of Pittsburgh, Finkelstein said.

Local TV news footage showed police at that location with rifles and wearing helmets and other tactical gear. Paramedics also were stationed near the synagogue and police vehicles were blocking some streets in the area.

The Tree of Life synagogue describes itself on its website as a conservative congregation that is traditional, progressive and egalitarian.

‘All These Jews Must Die’ Gunman Kills 11 In Pittsburgh Synagogue