Squirrel Hill, In Crosshairs Of Synagogue Shooting, Is A True Jewish City 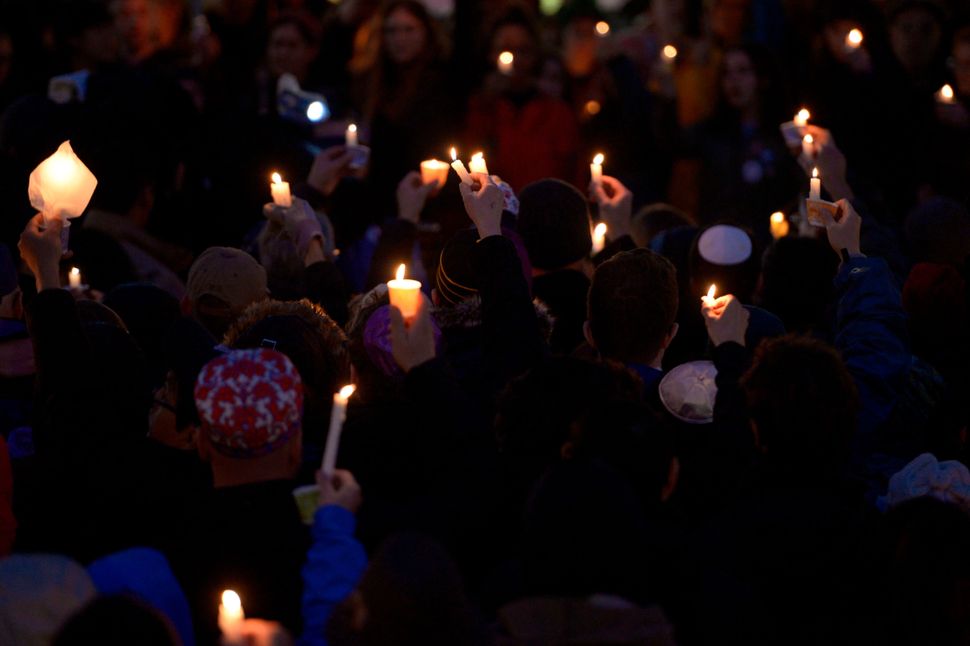 Jews all over the world unfurled their holy scrolls to chant aloud the exact same section of the Torah yesterday, as they do every Shabbat. On October 27, it was the story of Abraham’s hospitality, and how he rushed to throw open his tent to three visitors who turned out to be angels.

So it was supposed to have been in Squirrel Hill, the Pittsburgh neighborhood that became the site of the deadliest anti-Semitic hate crime in American history when a gunman stormed the Tree of Life synagogue building, killing 11 people and wounding six.

If the Jews of that synagogue in Squirrel Hill had been able to finish their Torah readings, they would have recognized its spirit of openness and warmth in their own community — and town.

Likewise, in Tree of Life, it’s a conglomeration of congregations: Dor Hadash, Tree of Life and New Light, where Caplan is the treasurer and his wife is the co-president. The first synagogue affiliates with the Reconstructionist movement, the other two with the Conservative movement; they’re independent entities, but very “close-knit,” said Caplan. He wasn’t in synagogue that Shabbat morning, although he had attended services on the Friday night.

The Tree of Life building sits near a church, the public library and the JCC, and that’s where the town of about 15,000 held a vigil for the shooting victims. As Shabbat ended, throngs of people gathered in the town center to mourn and to face the future together by doing the Jewish ritual of “Havdalah,” or separation, that marks the move from holy Shabbat to ordinary day.

“Where they are having this is the center of Squirrel Hill,” said Caplan, during the vigil.

The neighborhood is home to about 30% of Pittsburgh 50,000 Jews, or about 15,000 people, according to a 2017 study of the Jewish community cited by JTA. It has more than a dozen synagogue and is just over one square mile wide.

“I learned my first words of Hebrew in the small, whitewashed classrooms” of Tree of Life’s religious school, wrote Rabbi Ethan Linden, a Conservative rabbi who runs a movement summer camp and sent an emailed message Saturday night to that community. “I played a lot of eraser hockey on the immaculately polished floors outside the bathrooms on the lower level, and I saved my dimes to buy terrible chocolate chip cookies during the breaks between classes.” (Disclosure: The author of this post has a son who attended Linden’s summer camp, Ramah in the Berkshires.)

The vigil drew a diverse crowd bearing yarmulkes, candles and umbrellas against the misty dusk. A woman led them in the chanting of the traditional prayers and songs that close the Sabbath and open the Jewish week, which traditionally starts on Saturday night.

They sang a prayer praising light, and a prayer longing for the arrival of the messiah.

When the ceremony is over, a reporter interviewed one of the attendees, who said she lives just about five blocks away, and came because it was “just one of the times when you don’t want to be alone.”

It’s easy to find company in Squirrel Hill, which was also famously the home of children’s television personality and Presbyterian minister Fred Rogers, who extolled the joys of “neighborhood.”

Linden wrote in his message that Pittsburgh friends, walking home from Shabbat after the shooting, they had experienced “something amazing: people stopping their cars, rolling down their windows and offering condolences and blessings and words of comfort. ‘God bless,’ they heard, over and over again.

And Caplan talked a lot about how the members of his congregation were always on the phone with each other, chatting and checking in, even between Shabbats and holidays.

In addition to its schools, the community has several kosher restaurants, and a thriving Jewish Community Center. It also has something that’s increasingly rare: a family-owned Jewish funeral home.

“There are going to be a lot of funerals in the next couple of days,” Caplan said. “I know that.”

Squirrel Hill, In Crosshairs Of Synagogue Shooting, Is A True Jewish City