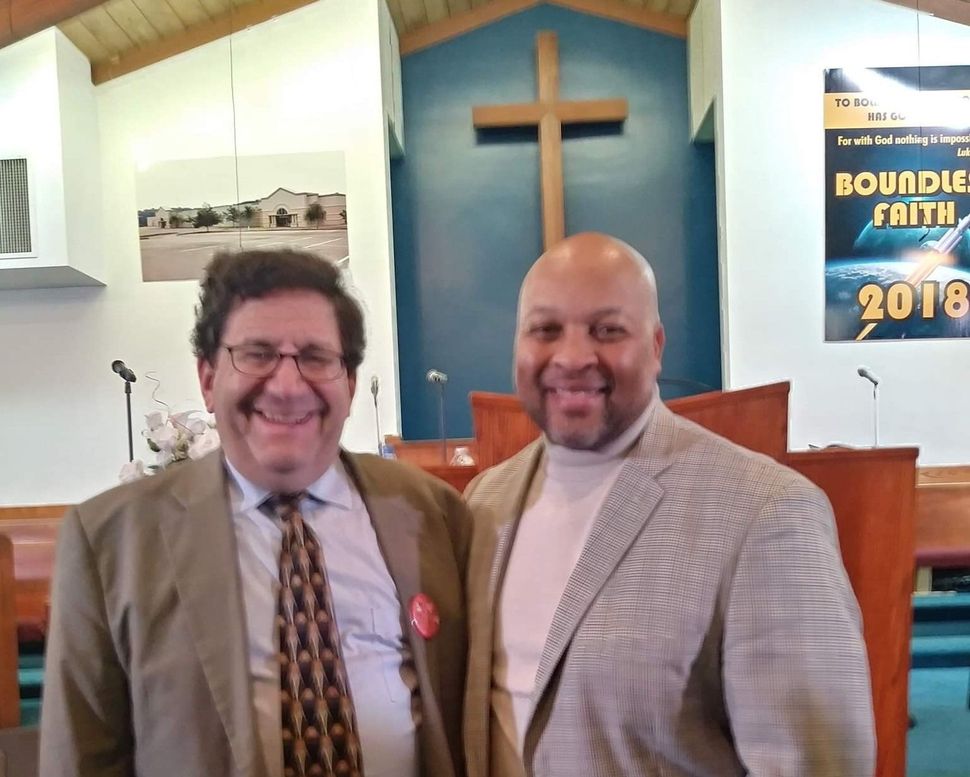 Rodman Street Missionary Baptist Church in Pittsburgh’s East Liberty neighborhood has known hatred and heartbreak — the heavily African-American church was one of two in East Liberty that were burned down in 1971 in suspected racist arson attacks.

Now, the 1,500-member church is supporting another local house of worship that was attacked in a hate crime: New Light Congregation, one of three Jewish congregations that suffered casualties during the shooting at the Tree of Life synagogue building on Saturday.

Rodman Street’s choir sang at the city-wide vigil service held at Soldiers and Sailors Memorial Hall, and the church hosted its own joint prayer service on Wednesday night, featuring delegations from more than a dozen churches in East Liberty, most of them African-American.

“As members of the Rodman Street Missionary Baptist Church, we had the pleasure of studying The Book Of Proverbs together with members of New Life this past years,” Homer F. and Lazetter M. Carter wrote on the website of the Pittsburgh Post-Gazette. “Our hearts and prayers go out to the family and friends who have lost their ones due this horrible and horrific crime. God be with you.”

For the last three years, the two congregations have held a shared service on Martin Luther King, Jr. Day weekend, alternating locations annually. Both religious leaders would give sermons, and New Light’s cantor would sing, as would the Rodman Street choir.

But the annual MLK event wasn’t the only connection. Perlman and one of the church’s former pastors co-taught a class on Proverbs – one of the students was Richard Gottfried, who was killed in the shooting.

The two groups have gone on historic tours together of Pittsburgh’s Hill District, a predominantly African-American neighborhood where the Jewish community once had a strong presence. And when Rodman Street was collecting supplies to support communities in the Carolinas affected by Hurricane Florence, the synagogue stepped up.

“When the hurricane hit, we started a drive, and immediately, Rabbi Perlman and others in that congregation, and others in that Jewish community, reached out and wanted to help me,” Canady said. “They brought items, and we brought them to South Carolina.”

Melvin Wax, one of the victims from New Light, was remembered by a fellow congregant for his particular devotion to helping with the clothing drive.

Rodman Street was founded in 1885, but now the church is a little more high-tech. TV screens are joined to the ends of the wooden roof beams, where the pastor can be seen in close-up and the words to the hymns can be displayed, karaoke-style. The stained-glass windows along the walls depict Old and New Testament figures with dark skin. A large wooden cross hangs behind the pastor’s altar. Next to it, above where the choir and choir and band stands, is a poster in 1970s-style bubble font showing a spaceship launching away from earth. “To boldly go where no one has gone before,” the poster reads, quoting Luke 1:37: “For with God nothing is impossible.”

At the beginning of the Sunday service the day after the shooting, Canady led the church in a prayer at the altar call, where the entire congregation links arms in front of the altar.

“It was centered around the incident that took place at Tree of Life,” Canady recounted. “I centered a whole prayer around that, and community and fear and unity, how we need to come together, how we can pray for our law enforcement officers who were shot.”

Rodman Street’s security was beefed up with armed guards and security cameras after a similar attack in 2015, when nine African-Americans were killed during a prayer service at the Emanuel African Methodist Episcopal Church in Charleston, South Carolina. Even so, the Pittsburgh shooting unsettled Canady.

“When I heard what happened there, it’s less than a mile away from here,” he said. “It shook me up some. Because in church, anybody can come. In fact, you invite everybody to come. That’s what you want.”

“I don’t want to become paranoid,” he continued. “I’m a person of faith and I believe that my life will not end until God says it will end…but we have to be on alert.”

“So I believe we are a target. But I also believe this: If you are not willing to die for something, then your life is not as valuable.”

At the prayer service on Wednesday, Perlman, Canady, other preachers and Pittsburgh mayor Bill Peduto spoke.

Ties between the African-American and Jewish communities have had their ups and downs over the decades: They were strengthened by alliances forged during the Civil Rights era of the 1960s, but have grown more strained in recent years as Jews were largely able to rise up the economic ladder. In the aftermath of the Crown Heights riots of 1991, Jewish institutions around the country re-prioritized working in partnerships with African-American organizations and in interfaith efforts with black churches. Some points of contention still remain, including internalized racism within some pockets of the Jewish community, support for anti-Semitic preachers like Louis Farrakhan within some pockets of the African-American community, and tensions over left-wing black groups’ solidarity with the Palestinian cause.

Many Jews and African-Americans have embraced more solidarity in recent years over a shared sense of being targeted as minorities. Rabbi Jamie Gibson of the Pittsburgh congregation Temple Sinai, not far from Tree of Life, told The New Yorker that he had organized a local vigil after a white supremacist murdered nine people at Emanuel African Methodist Episcopal Church in Charleston, South Carolina.

“I think that the people who devise these plans and get hold of these murderous weapons have created an entire world in their mind where it makes sense,” Gibson said. “They have an enemy. The enemy is an African-American, the enemy is a Jew. And they can only feel safe if they protect themselves.” The brother of one of the women killed in the church said that hearing about Pittsburgh “was like a punch in the gut.”

Perlman said at the vigil on Wednesday that he had been heartbroken over the Charleston shooting, as well as the killing last week of two African-Americans at a Kentucky supermarket by an alleged racist gunman who had first tried to attack a black church.

A reading of Psalm 23 at the final funeral of the Pittsburgh victims was read by Emanuel’s senior pastor, Eric Manning. Tree of Life rabbi Jeffrey Myers said Manning had been an “angel” and helped him find the strength to lead one last funeral service, Armin Rosen of Tablet reported.

“Nothing is going to change overnight. But you can’t let that keep us from moving and keep us from uniting and realizing that our liberation is tied together,” Summer Lee, who is African-American, told the local black paper the New Pittsburgh Courier at a community vigil soon after the shooting. “So we have to lean on each other and comfort each other in these times.”

Canady says he hopes to restart the joint Bible study sessions, this time focusing on the books of Esther and Daniel.

But there are other things he has learned from the Jewish community. He said he learned a lot from going to Squirrel Hill, the heavily-Jewish neighborhood where the shooting occurred and where his daughter used to go to school.

“I believe in your community, that the expectation level is high, and education is high,” he said, referring to Jews. “Those are some things that I’ve taken away, that I want to put in our school.”