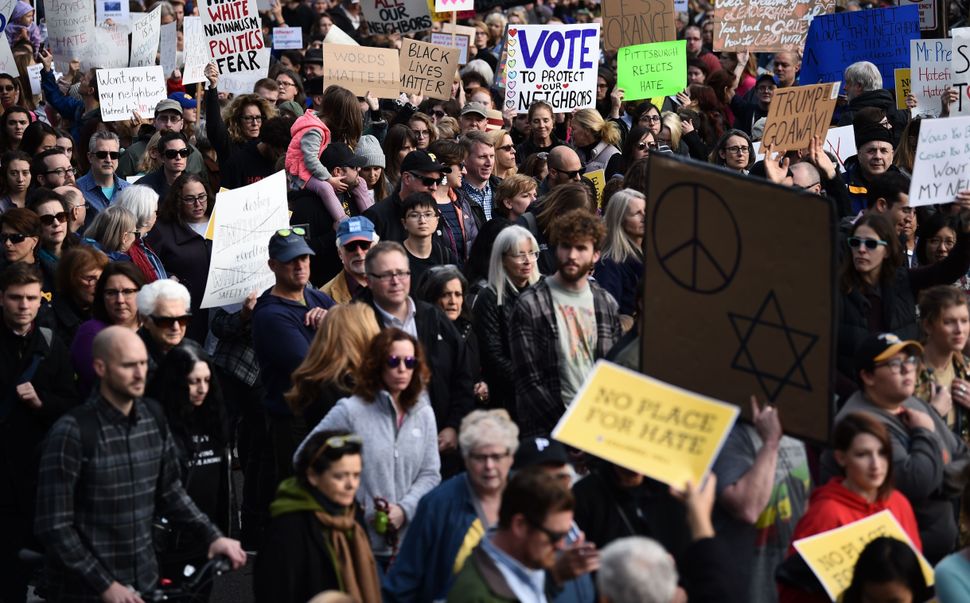 They came in their thousands, singing Jewish songs and folksy protest anthems like “This Land Is Your Land.”

Holding signs denouncing Donald Trump as “President Hate,” they marched in the fall sunshine through the tree-lined streets of Squirrel Hill, the quintessential Pittsburgh Jewish neighborhood that was scarred forever by deadly violence a few days earlier.

Pointedly, they started at the onetime home of beloved former children’s television host Fred Rogers, an icon of civility whom many see as a symbol of everything Trump is not. They ended at the Sixth Presbyterian Church of Pittsburgh, where Rogers worshipped.

“This is Mr. Rogers’ Neighborhood,” one sign said. “Take your hate speech and leave us in peace.”

It was a powerful and resonant rebuke to the most powerful man in the world, who came over the objections of many to visit the Tree of Life synagogue where an anti-Semitic gunman killed 11 worshipers in the deadliest attack ever on American Jews. Trump spent 18 minutes inside the sanctuary, then emerged to chat with Rabbi Jeffrey Myers before driving off through the cordoned-off streets.

He later visited wounded victims and first responders before returning to the White House without making any statement.

Although the protesters were kept out of Trump’s sight in Squirrel Hill, their chants from a couple of blocks away could be heard by Trump, whom many marchers hold responsible for creating a climate of hatred that helped lead to the shooting. 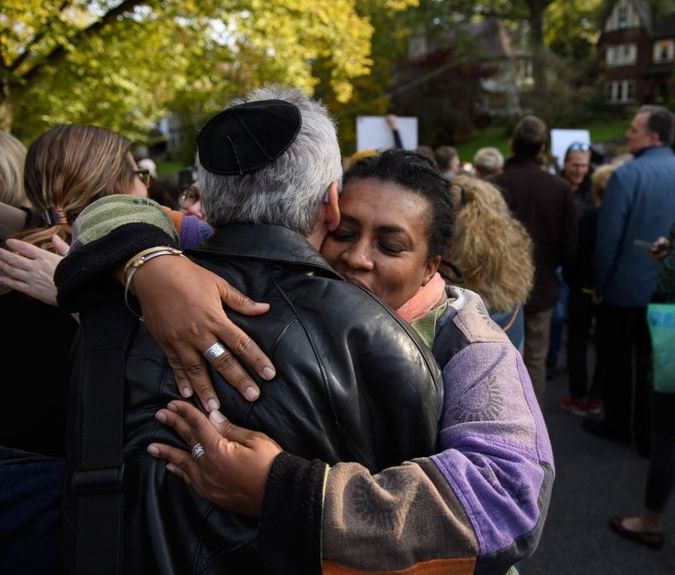 Other signs included “You know who else was a nationalist? Hitler” and “Yinz a Jagoff,” a Pittsburgh-ese insult that roughly translates into polite English as “You’re a jerk.”

“It was good to be together, to show that we love each other regardless of race, nationality, creed,” said Oscar Gettleman, a Pittsburgh native who marched while wearing his kippah.

There was a kumbaya spirit embodied in classic Jewish protest/summer camp songs like “Ozi v’Zimrat Yah” and “Olam Chesed Yibaneh.”

But there was also palpable anger at Trump. Speakers from Bend the Arc, the progressive Jewish group that organized the march, castigated Trump and what they saw as his complicity in the attack, allegedly perpetrated by an anti-Semite who shared Trump’s anti-refugee views.

“Your words and your policies have emboldened the white nationalist movement,” one speaker said. The Tree of Life attack “was not the first act of terror you have inspired against minorities.”

As the march passed through the neighborhood’s leafy streets, many residents stood outside. Some took videos and some wept openly as they did so. 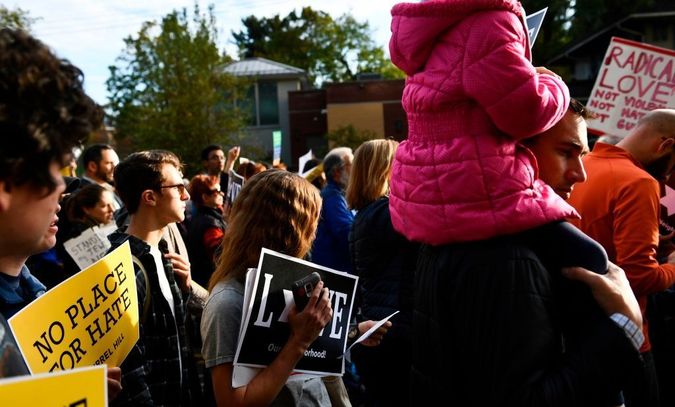 Across the street from the synagogue, the group conducted the mourning tradition of “kriah” — tearing ribbons to symbolize that people are not whole because of the loss of life.

The march hit a snag when President Trump’s motorcade attempted to leave the synagogue area with a mass of marchers standing in the way. As sirens wailed while the presidential procession tried to leave, organizers chanted instructions to their followers: “Turn your back!”

As the group turned a corner, they passed a police station, where the marchers gave the officers a round of applause and chanted “thank you.” Four police officers were injured during the response to the Tree of Life shooting.

The Bend the Arc event was not the only protest in town: A previous rally/shiva event had also been held nearby, organized by the leftist Jewish group IfNotNow in collaboration with the Democratic Socialists of America, Jewish Voice for Peace and other groups.

“We know Trump is responsible for violence in our city,” IfNotNow and DSA organizer Arielle Cohen told the Forward. “Trump has been the enabler-in-chief.”

Organizers helped pass out kosher-style sandwiches; as one IfNotNow member explained, “Please feed yourselves – that’s the most Jewish mourning thing you could do.” 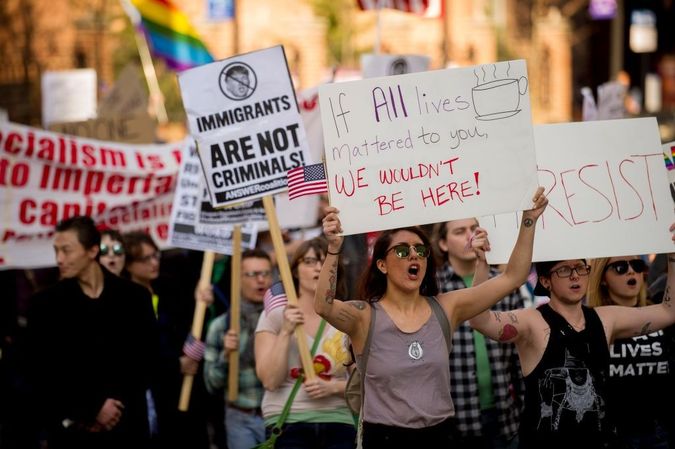 IfNotNow leaders also led their crowd, which numbered in the hundreds, in “Ozi v’Zimrat Yah” and “Olam Chesed Yibaneh,” as well as the Mi Shebeirach and Mourner’s Kaddish prayers.

At the church at the end of the Bend the Arc rally, two high school juniors spoke together: Simone, who is Jewish, and Anya, who is Muslim, are both members of the interfaith partnership group Sisterhood of Salaam Shalom.

Anya cited the Quran: “Humanity is but a single brotherhood, so make peace with your brother.”

Simone quoted the medieval rabbi Rambam: “No joy is greater or more glorious than gladdening the hearts of the poor, the orphans, the widows, and the strangers.” 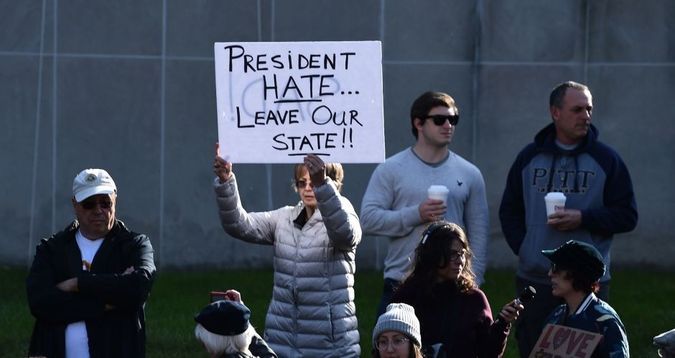 Simone wasn’t the only one to repeat a classic Jewish phrase: Along one sidewalk during the march procession, two young Jewish men with beards and hats were asking passers-by, “Excuse me, are you Jewish?” They were attempting to entice people to wrap tefillin. They did not appear to have much success.

As the Bend the Arc speeches wound down, a group of IfNotNow members sat in middle of the street a block away, singing songs and chants and passing out food as part of their shiva. And about a mile away from that, the first official shiva of the victims was being held at Rodef Shalom Congregation. It was for the brothers Cecil and Daniel Rosenthal, who, their brother-in-law said in his eulogy, were “kind, thoughtful and innocent…pure souls who carried no ill will toward anyone.”

Clarification: November 1, 11:35 p.m.: This article was changed to correct the unintended implication in paragraph 9 that the “racially diverse” members of the crowd, including the African-American man holding the sign, were not Jewish. We apologize for the error.