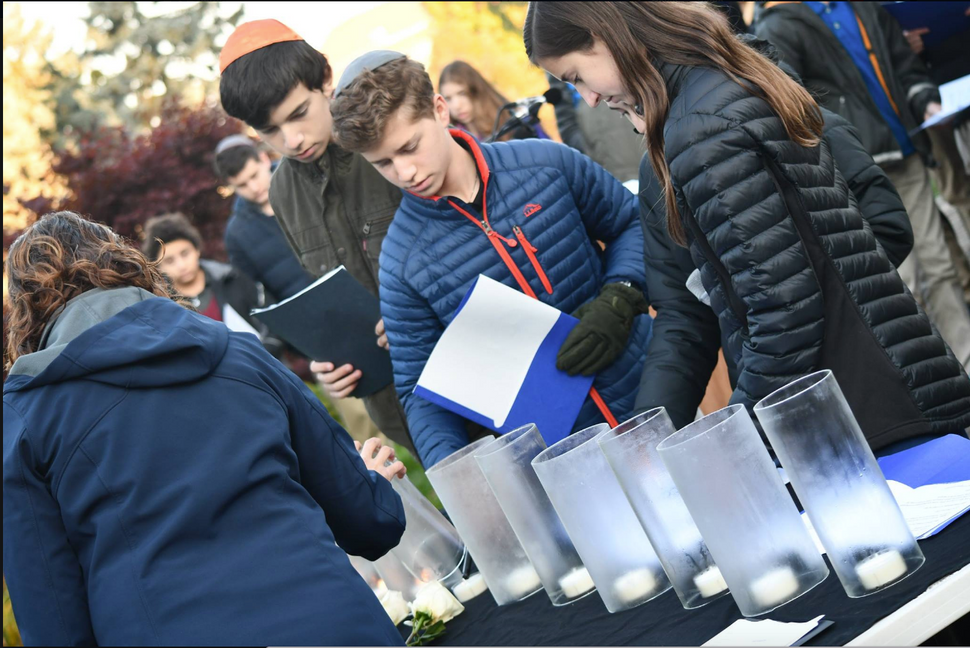 A Jewish school in Pittsburgh boasts one of the city’s landmarks: a Holocaust memorial sculpture, created by an artist from 6 million aluminum tabs that the students collected over almost five years.

When the Community Day School dedicated the sculpture, called “Keeping Tabs,” the feeling was that such an elaborate effort was necessary to help privileged American Jews bear in mind the violent anti-Semitism of the past.

That was in 2013. Now Pittsburgh’s Jews need no reminder. On Saturday, October 27, a gunman killed 11 people and wounded 6 at the nearby Tree of Life synagogue, and the following Tuesday, the school was using its Holocaust memorial to remember their own victims.

“What does it mean to be brave?” Yishai Selig, a student, asked in praising the police officers who responded to the attack. “In my opinion, bravery is in every one of us. Officers who came to assist entered an unknown and dangerous scene they might not have come out of to help people they didn’t know.”

The school’s oldest students had decided on Monday, the first day back in class after the shooting, that they wanted to plan a memorial service. They started it with “The Star-Spangled Banner” and “Hatikvah,” the Israeli national anthem, accompanied by students on guitar and piano. They lit 11 candles and read a brief biography for each person a candle represented. They recited poems.

“The whole world is a very narrow bridge, and the main thing is to have no fear at all,” they sang in a rendition of a beloved Hebrew folksong.

Some older students knew some of the victims from their “minyan makers” program, where they would go to Tree of Life on Mondays to make sure the synagogue had the requisite ten people required for a complete prayer service.

Tree of Life’s rabbi, Jeffrey Myers, thanked the students for their efforts.

“When I came here this morning, I had no strength,” he said. “You gave me the strength to get through today, and for that I thank you.”