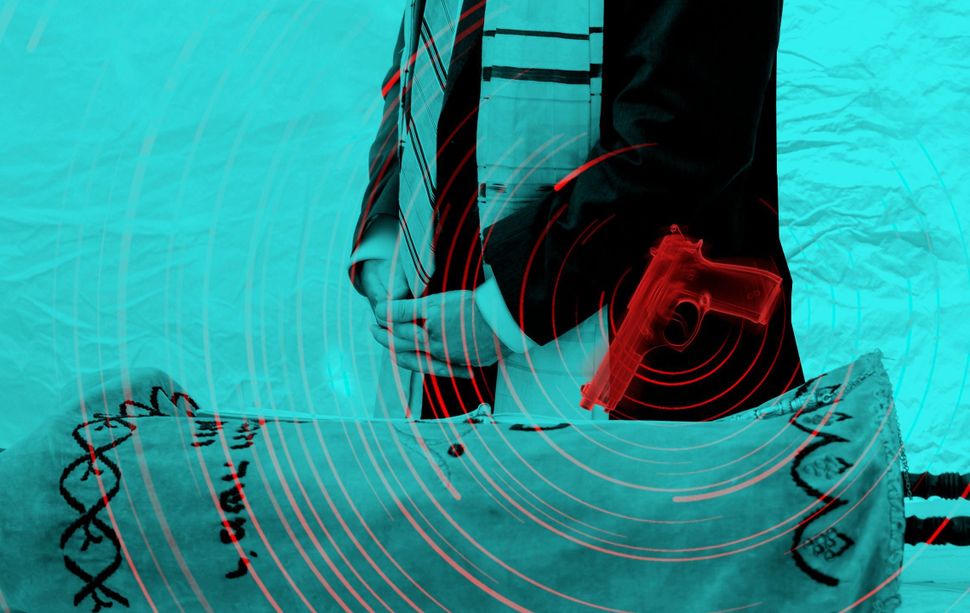 When President Trump claimed that the shooting at the Tree of Life synagogue in Pittsburgh could have been prevented if there had been “protection” inside, reactions in the Jewish community were split.

Many liberal Jews — including the family of a man injured in the massacre — felt he was blaming the synagogue for the death of 11 people.

But another smaller, though passionate, segment of the community felt they heard something totally different: common sense.

On a recent morning at a Starbucks in Squirrel Hill, the heavily-Jewish neighborhood where Tree of Life is located, lifelong Pittsburgher Jack Perkowitz, 88, said he resented Trump’s words, but still had a message for would-be synagogue guardians: “Go for it.”

“Who wants to sit there and get slaughtered?” he said.

Across the country, many Jews are wondering if they can pray in peace without packing heat. Synagogues and congregants are debating if members of the community should arm themselves to come to synagogue, and if that might be more effective than hiring guards. Yet experts worry that people not trained to respond to active shooters cold end up creating more victims, not fewer.

While there are no reliable statistics about gun ownership, Jews across the country seem to have been showing a steadily increasing interest in firearms. Jewish shooting clubs have popped up from Los Angeles to Chicago to New Jersey. However, it is likely that Jews own guns at a lower rate than the general U.S. population, of which 30% own at least one firearm, according to the Pew Research Center. Gun ownership rates among Republicans are more than double that of Democrats, and Jews are more than three times as likely to be registered Democrats.

In the wake of Saturday’s massacre, however, many Jews have decided that it’s time for them to take their protection into their own hands. Three national rabbinical associations of different denominations have held conference calls or webinars for rabbis seeking guidance in how to address congregants who want to bring firearms to services. In Birmingham, Alabama, one Orthodox rabbi said his synagogue was discussing asking members with concealed permits to bring their guns to Saturday services.

Fred Kogen, a doctor and mohel in Los Angeles who organizes a Jewish shooting club, points out that it’s a mitzvah, or religious obligation, to be able to protect Jews. Kogen also feels that there is a certain irony about Jews supporting the State of Israel and its right to self-defense, but banning guns in the sanctuary.

“In the United States, they shun Jews who have any affiliation with guns, but once they go on a mission trip to Israel they can’t get a picture with an Israeli soldier carrying an Uzi [machine gun] fast enough,” he said.

The most Jewish way to respond to the Pittsburgh attack is to buy a gun. Self-defense is that most Jewish of ideals.

Outside Baltimore, Tzviel Blankchtein, an Israeli-American security specialist, has noticed an uptick in interest since the shooting. He says that by chance, he was running an active shooter response class on Sunday. Five people had registered in advance. Over forty showed up.

Blankchtein says that overall, he supports arming congregants. He says it is a deterrent to attackers to know that there are trained, gun-carrying worshippers.

But he worries that untrained congregants could pose additional threats to congregant safety, and create massive liability issues for synagogues. Congregants might accidentally shoot someone — accidental gun deaths tend to rise with a surge in gun sales. And they could also contribute to injuries and deaths in the event of an active shooter, since synagogue sanctuaries are frequently crowded, open spaces with few exits.

“My fear is that people will be carrying, and will try to do the right thing for the right reasons, but with tragic consequences,” Blankchtein said. “Rather than getting the shooter, they’ll hit a congregant.”

Blankchtein’s company, Masada Tactical,, provides security to four area synagogues, he said. They also offer training to armed congregants tailored to the synagogue: How to avoid hitting congregants depending on where you normally sit in the sanctuary; how to corral people towards the fire exits safely.

Many Jews with concealed carry permits tell me they’ll be packing heat every time they attend synagogue. Armed anti-Semites approaching a Jewish place of worship will be entering a world of pain! They won’t even have time to say hello to our little friends…

Jonathan Burstyn, a nursing home administrator who teaches marksmanship classes, is one of several members who bring handguns to his Chicago synagogue. Not everyone in the congregation knows they are carrying. The guardians, who receive ongoing training every three months, have developed a typically Jewish way to patrol the front entrance: They act as greeters. If someone unfamiliar comes through the door, Burstyn says, they are trained to assess the risk they pose discreetly and politely.

“[We ask] any open-ended question that’s not threatening, but that’s designed just to get someone’s vibe,” Burstyn said. “If [someone] looks a little funny, approach them in a very welcoming manner.”

Having armed congregants could also defray the costs of a larger security plan, Burstyn said.

Beth Tfiloh Congregation, in Baltimore, spends close to $250,000 annually on security, including hiring High Holiday door guards from the nearby Masada Tactical, according to its senior rabbi, Mitchell Wohlberg. The synagogue is the largest Modern Orthodox congregation in the country, and has an attached day school. Many synagogues can barely afford to hire guards for the High Holidays.

But some are worried that having guns in the building would violate the sacredness and sense of peace that synagogues are supposed to provide.

“I don’t know anyone in Squirrel Hill who would support carrying a gun [to services],” said Sally Rafson, a Squirrel Hill resident who lives around the corner from Tree of Life.

Rafson said she feels that it is important to have hired guards outside a synagogue, but that Saturday’s shooting is not a reason to bring the weapons inside.

“It shouldn’t force us into that mindset, where we now have to have guns to maintain our sense of safety,” she said.

Lutman and other rabbis opposed to guns say that a better way to prevent shootings is by strengthening community relations, especially with other faith institutions in their neighborhoods and cities. It signifies unity, they say, which can act as a deterrent to would-be killers.

Chezky Rosenfeld, the director of development for the Yeshiva Schools of Pittsburgh, said there are “arguments to be made on both sides.”

Rosenfeld said he’s attending at least one meeting every night this week to discuss security upgrades for his synagogue, the schools and for the overall community.

“Shul has to be a safe place,” Rosenfeld said. But, he acknowledged, “Even to have armed guards in front of a shul is uncomfortable.”

Gun sales have traditionally spiked after mass shooting events, so it is likely, given the overtly anti-Semitic motivations of the Pittsburgh shooter, that many Jews across the country will be registering for permit classes.

Burstyn said he was a little stuck on why it took this long for American Jews to arm themselves.

“If anything, they’re definitely waking up late on the game,” he said. “Why does there need to be a massacre in Pittsburgh for this to happen?”