Some Jews Do Love To Shoot — Just Not On Shabbat 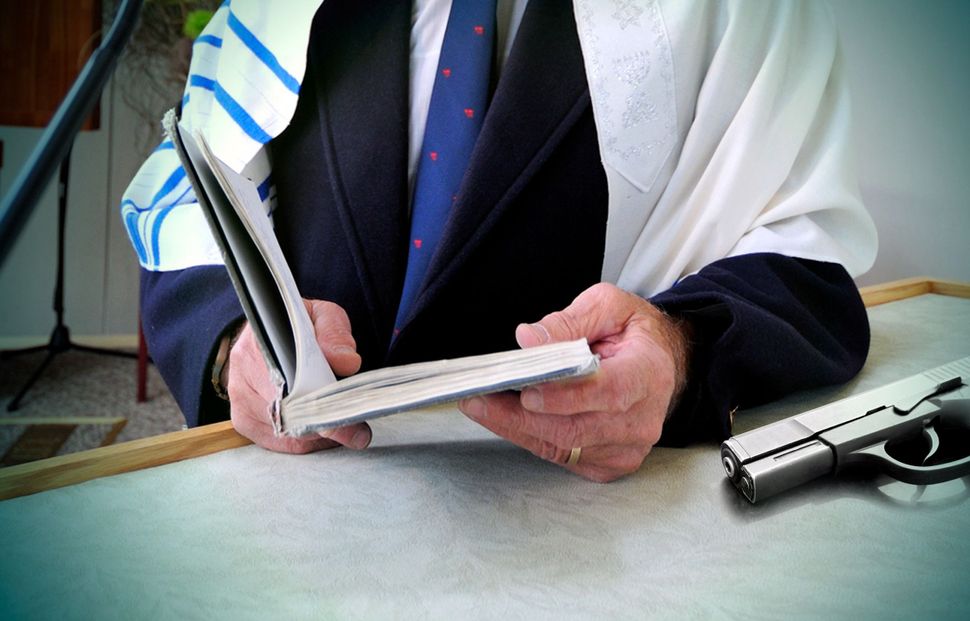 On Saturday, the March for Our Lives, a gun protest march organized in part by teenage survivors of the shooting in Parkland, Florida, will take place in cities across the country. Plenty of Jews will be in attendance — some of Parkland’s strongest voices since the shooting have been Jewish survivors and parents of those who were killed.

But there are Jews who think the gun laws on the books are just fine — and they say their numbers are growing.

This latest push for gun law reform comes at a moment when some Jews say they now feel they need to be more adept at defending themselves than they have been in many decades. Anti-Semitism is on the rise in the United States. Jewish gun owners see their firearms not only through the lens of individual freedom, but also as a necessity to prevent themselves from being the victims of hate crimes — or of a second Holocaust.

“Given the history of persecution of the Jews, and the Holocaust, it’s hard for me to understand how Jewish communities do not take the steps to defend themselves,” said Tzviel Blankchtein, who owns the Masada Tactical gun store and training center in Pikesville, Maryland.

While there are no reliable statistics about Jewish gun ownership, Jews likely own guns at a lower rate than the general U.S. population. According to the Pew Research Center, 30% of Americans own a gun. Gun ownership rates among Republicans are more than double that of Democrats, however, and Jews are more than three times as likely to be Democratic and not Republican.

Yet Masada Tactical is located in a heavily Jewish suburb of Maryland, and Blankchtein says that most of his clients are Jewish. At first, he said, his Jewish clients were coming in only to purchase decorative weapons or to sign up for basic self-defense classes. But the spike in gun reform activism has them spooked.

“In the past couple weeks they’ve been coming back and saying, ‘Let me get an AR and a Glock,’” Blankchtein said, referring to the AR-15 assault rifle and to Glock handguns.

The name of the store refers to the ancient mountain fortress that a small group of Jews used to fend off the Roman army for two years in the first-century C.E.

Indeed, there are gun-loving Jews all over the country, from various cultural and religious backgrounds, who cherish their right to bear arms. They run clubs like Bullets & Bagels, in Los Angeles, or advocacy groups like Jews for the Preservation of Firearms Ownership, which has several thousand members.

There’s Mel “Dragonman” Bernstein, a prolific gun dealer in Colorado whose military history museum, Dragonland, draws thousands of visitors each year. Bernstein describes himself as the “most armed man in America,” and makes no bones about what he sells: “people-hunting guns.”

In Wisconsin, there’s Henry Sapoznik, a Yiddish-speaking gun enthusiast. One of his prized possessions is a Belgian handgun that is manufactured for Israeli police and has a small Jewish star stamped behind the trigger.

Jonathan Burstyn, an Orthodox Jew in Chicago, guards his synagogue on Saturdays and offers gun safety and training classes on Sundays. Burstyn draws a parallel between the National Rifle Association’s defense of the Second Amendment and Orthodox Judaism’s strict interpretations of Jewish law.

“Just like Orthodox Jews, we don’t reform the Torah,” Burstyn said. “Wayne LaPierre [head of the NRA] is expressing faith in the Constitution.”

The spike in anti-Semitism in the past several years — including threats against Jewish community centers — has also spurred some synagogue leaders to take their defense into their own hands.

Blankchtein says he has trained rabbis and synagogue lay leaders from all denominations in the Pikesville area in handgun safety. The synagogues are not broadcasting the shift toward gun safety, but Blankchtein says nearly all of them are taking steps to prepare for a hypothetical attack.

“I don’t know where this thought process that Jewish people are against guns came from,” he said. “Because we’re not seeing it here.”

In New Jersey, the Golani Rifle and Pistol Club holds firing range practices and self-defense classes. The group is about 20 years old and was founded by a group of Jewish friends who wanted to formalize their weekend target practice sessions. Golani takes its name from the Israeli military brigade that patrols the Golan Heights; it offers only kosher food at its events, and the members don’t shoot on Shabbat.

Phil, a founding member of the group who asked to only identified by his first name, said that the group has members of all backgrounds, from Reform to Hasidic, including plenty of non-Jews.

As far as gun reform activism is concerned, Phil said he supports at least one of the group’s views: a ban on bump stocks, the assault rifle accessory that makes semiautomatic weapons shoot like automatics. He said it doesn’t add any “value to the shooting experience.” Other than that, he thinks that proponents of stricter gun control are after a blanket ban on guns.

“When they say ‘gun control,’ to me that’s just a prelude to banning everything,” he said. “It’s just a start.”

In speaking to the Forward, he frequently invoked the Holocaust, saying that his own parents are survivors and that it frames his thinking about guns. He is worried about what he sees as a rise in anti-Semitism in the United States, and believes that Jews shouldn’t let their guard down.

“Do I think there will be a Holocaust here? No,” he said. “But I do think that things will perpetually get worse for Jews.”

Richard Feldman, a Jewish pro-gun lobbyist, also often cites the Holocaust when arguing against what he considers excessive gun control. But the connection between gun control and the Holocaust — one frequently made by the NRA — has been refuted by historians and decried by major Jewish institutions. Jonathan Greenblatt, national director and CEO of the Anti-Defamation League, wrote in 2015 that it is “mind-bending to suggest that personal firearms” could have stopped the massive Nazi army from shooting tens of thousands of Jews and deporting millions to death camps. Don Young, a Republican congressman, came under fire from ADL and other groups recently for asking, “How many Jews were put into the ovens because they were unarmed?”

Feldman claims to be the first Jewish lobbyist to work for the NRA. Despite persistent claims of anti-Semitism made against the NRA, he says he received a warm welcome when he started in 1984.

“They said, ‘Boy, this is great, now the Jewish people are stepping up,’” he remembered.

Feldman said he believes that the rate of Jewish gun ownership is skyrocketing in the United States, and that he has been hearing from gun shop owners across the country who are seeing more and more Jews buying guns. He thinks there are more Jewish gun owners than most Jews would expect, because most Jews live in communities where guns are not popular.

“Jewish gun owners tend to be very quiet if they live in an anti-gun community,” he said. “They wouldn’t talk about it, because it’s politically incorrect.”

Miriam Greenfield, a Modern Orthodox gun owner from Great Neck, New York, said she agrees that gun ownership among Jews is on the rise. She believes that as anti-Semitism grows in the United States and in Europe, it’s becoming more socially acceptable to be a gun owner. In hushed conversations in the women’s sections of synagogues around New York City, she’s learned that many more Orthodox women own guns than she thought.

She’s also convinced plenty of women of the peace of mind that comes from having a gun in the home.

“When everything between Trump and Hillary was heating up, one of the women thought they were going to start killing Jews again,” Greenfield recalled. “So I said, ‘Why don’t you make sure you’re safe?”

Greenfield converted to Orthodox Judaism to marry her husband. When she did, her father — a career Marine who signed up his daughter for NRA membership at birth — sent her nine family heirloom weapons to serve as a “small arsenal.”

“We had a very serious conversation about it,” she said. “He said, ‘I’m really glad that you’re happy, but I don’t want my daughter to become a martyr because she decided to become Jewish.’”

Some Jews Do Love To Shoot — Just Not On Shabbat