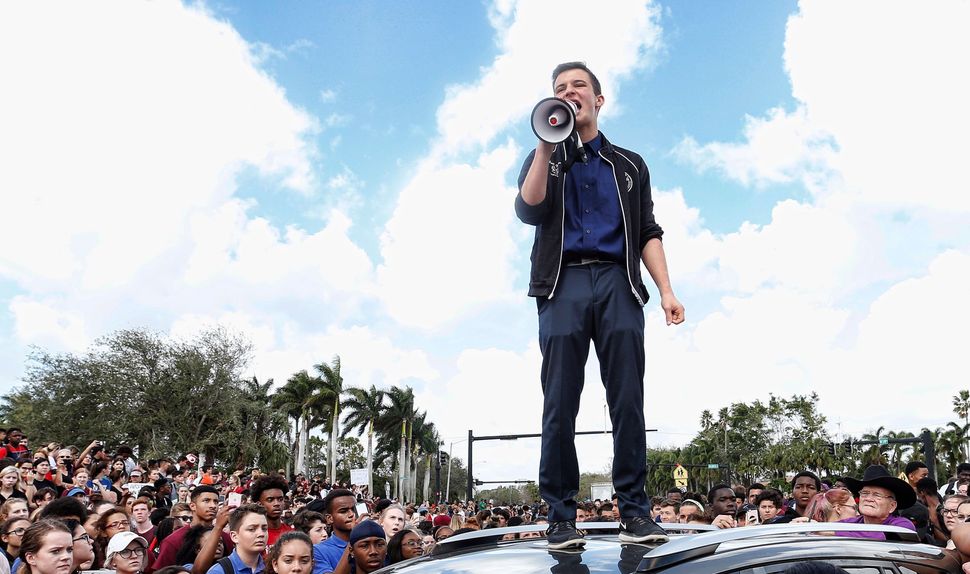 One of the most powerful applause lines was delivered by 17-year-old Cameron Kasky. Close to 10 p.m., Kasky, a Jewish senior at Marjory Stoneman Douglas High School, made a request of Florida Senator Marco Rubio. Rubio was one of several interlocutors assembled onstage, alongside Florida Congressman Ted Deutsch and Dana Loesch, a representative for the National Rifle Association.

“This is about people who are for making a difference to save us and people who are against us and prefer money,” Kasky said. “So, Senator Rubio. Can you tell me you will not accept a single donation from the NRA in the future?”

“There’s a lot of money on both sides of every issue in America, and where that leaves us policy makers is to look at both sides of the issue and decide what we think is right,” Rubio eventually responded. “I will always accept the help of anyone who agrees with my agenda.”

Over the two-hour broadcast, Kasky was one of several Jewish voices that pushed Rubio and representatives from the NRA to answer for the shooting at Stoneman Douglas that left 17 killed and 14 injured. Fred Guttenberg, father of a teenage girl killed in the shooting, also challenged Rubio over guns. Linda Schulman, mother of Scott Beigel, demanded answers from Loesch. They were part of a group of over a dozen grieving parents and survivors funneling their rage into pointed criticism on live television.

On Twitter, Kasky’s comments inspired awe among those who saw the broadcast.

Watching a teenager fundamentally challenge Rubio’s talking points feels like watching a generation call B.S. on a whole form of politics. For years, Rubio’s weakness has always been inauthenticity, but no journalist (including this one) has evoked it as vividly.

.@MarcoRubio almost got away with his routine. Then he met @cameron_kasky. The Florida senator is a talented politician, but he met his match in a 17-year-old who called him out over NRA cash https://t.co/DIXfAy2MEe #StudentsStandUp #NeverAgain #ThrowThemOut pic.twitter.com/XfaMISyqDm

Five of the 17 victims of the school shooting were Jewish and Parkland sits squarely in the middle of Jewish south Florida, in the sprawling suburb of Fort Lauderdale dotted with synagogues and kosher eateries. Ironically, it once won the title of “safest town” in the Sunshine State.

Fred Guttenberg, whose daughter Jaime was shot in the back, also received a strong response for his self-described “brutally honest” approach early in the evening. He told Rubio that his “comments this week and those of our president have been pathetically weak.”

Guttenberg asked Rubio to affirm that, “Guns were the factor in the hunting of our kids in this school this week.” Rubio responded by saying that he did not believe that a ban on assault weapons would have prevented the shooting.

“Senator Rubio, my daughter, running down the hallway at Marjory Douglas, was shot with an assault weapon, the weapon of choice,” Guttenberg said. “It is too easy to get. It is a weapon of war. The fact that you can stand here and can’t say that… I’m sorry.”

Linda Schulman, the mother of Scott Beigel, asked her question of NRA representative Loesch. Beigel was a geography teacher six months into his time at Stoneman Douglas. He reportedly was shot after holding the door open so that students could hide inside his classroom.

“Why are my son’s unalienable rights not protected as fiercely as the right to bear arms?” Schulman asked Loesch.

““I believe in protecting life,” Loesch responded, referring to the armed security guards station in the arena.

“I don’t think you should have ever had to have gone through that,” Loesch said later. “If I could change time and change circumstances, I would have done everything in my power to prevent that.”

“I think you have that power,” Schulman said before sitting down. 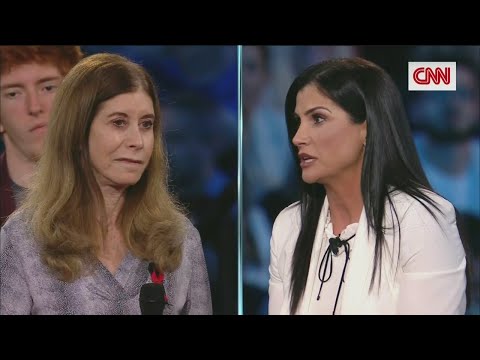 “I am tired of people doing nothing,” said Lori Alhadeff. Her daughter Alyssa, 15, was also killed. “This horrific incident has to be the catalyst that finally puts things in action.”

Another parent, Max Schachter, read a poem written by his 14-year-old son Alex, who was also killed in the shooting. The poem was titled “Life Is Like A Roller Coaster.”

“He wasn’t writing about his life and had no idea his poem would become the future,” Schachter said.

“Eventually it comes to a stop,” the poem read. “You won’t know when, or how, but you will know that it will be time to get off and start anew.”

Max Schachter, the father of Alex Schachter who was killed in the shooting, shares a poem that his son wrote at #StudentsStandUp https://t.co/032AaYLVhU


The night closed with a performance of Stoneman Douglas’ drama club performing an original sone, “Shine.”

“You may have hurt us, but I promise we are not going to let you in,” the students sang.”We’re putting up a fight. You may have brought the dark, but together we will shine a light, and we will be something special. We’re going to shine, shine.”