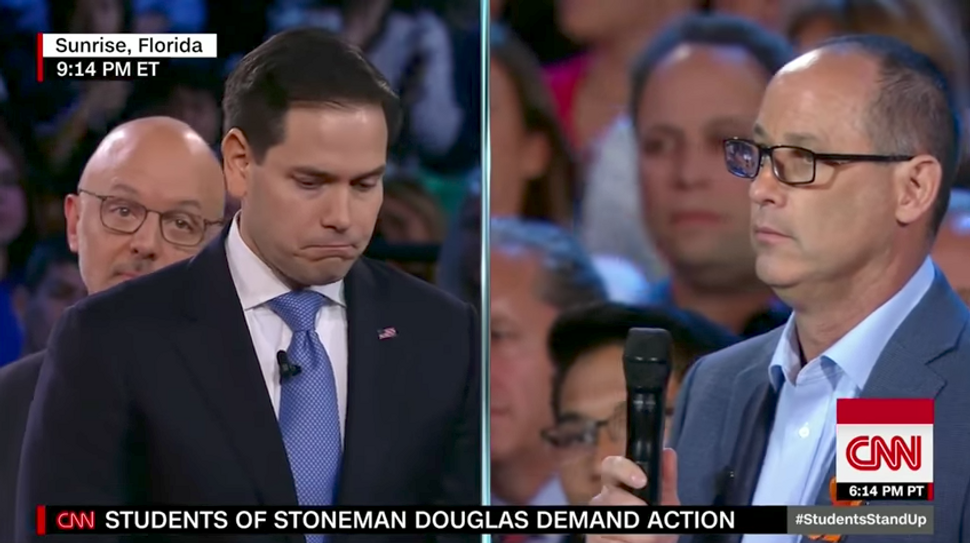 Fred Guttenberg, the father of Jaime Guttenberg, speaking with Marco Rubio during a town hall televised on CNN Wednesday. Image by YouTube

The father of a Jewish teenage victim of the shooting at Marjory Stoneman Douglas High School in Parkland, Florida, last week was among the voices to criticize Florida Senator Marco Rubio for his statements about guns and gun reform during a CNN broadcast Wednesday evening.

Fred Guttenberg’s daughter, Jaime Guttenberg, was shot in the back as she was fleeing the shooter who ultimately killed 17 people and injured 14.

Guttenberg asked Rubio to affirm that, “Guns were the factor in the hunting of our kids in this school this week.” Rubio responded by saying that he did not believe that a ban on assault weapons would have prevented the shooting.

“Senator Rubio, my daughter, running down the hallway at Marjory Douglas, was shot with an assault weapon, the weapon of choice,” Guttenberg said. “It is too easy to get. It is a weapon of war. The fact that you can stand here and can’t say that… I’m sorry.”