David Shribman, executive editor of the Pittsburgh Post-Gazette, and his wife, Cindy Skrzycki, a journalist and senior lecturer at the University of Pittsburgh, live three blocks from the Tree of Life synagogue, where 11 congregants were murdered on October 27 in what is considered the worst anti-Semitic attack in American history. He is Jewish, she is Catholic; their youngest daughter is studying to become a Reform rabbi. A week after the attack, they spoke by phone to Forward editor-in-chief Jane Eisner about what happened that terrible day and what it means to them and their community. This interview has been edited for clarity.

Jane Eisner: The front page of the Pittsburgh Post-Gazette on the Friday after the shootings contained the kaddish, the Jewish prayer of mourning, in Hebrew. David, why did you decide to create this unusual front page?

Cindy Skrzycki: The community is a huge mourner’s kaddish right now. There has been one funeral after another. People from all over the city have come to pay their respects.

JE: When did you first think of doing this?

DS: It was Wednesday, I think. I asked my rabbi, James A Gibson [of Temple Sinai], to send the text to me and I worked on it at the office. Then I went to the Milky Way kosher restaurant to meet a bunch of rabbis who were here in town for the funerals. One of the rabbis was the rabbi of the temple in Montreal where my parents were married and I wanted to meet him. I shared it with our rabbi and with them to make sure I had it just right.

JE: What was the reaction in the newsroom?

DS: Most saw it in the paper the next morning and I think they felt that it hit the right chord. There was that seven-hour period between the time the paper goes to press and the time it appears in the morning, and I worried that it might have been the wrong thing. But I knew it was the right thing.

JE: And the public reaction? 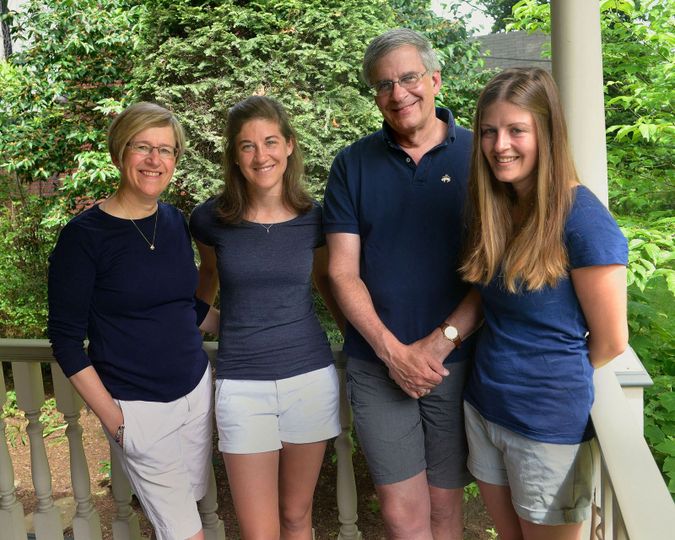 Journalists & Family: From left, Cindy Skrzycki, senior lecturer at the University of Pittsburgh; Elizabeth Shribman, associate director of executive operations at the San Francsico Symphony; David Shribman, executive editor of the Pittsburgh Post-Gazette; and Natalie Shribman, candidate for rabbinical ordination in May 2020. Image by Larry Roberts

JE: Where were you on October 27 when you heard about the attack?

CS: We were both in the neighborhood, not very far away. I was coming from the JCC, and I noted an ambulance, and then police cruisers, and then six unmarked black cars going 60 miles per hour through a congested neighborhood and I knew that something was going on. I was on my way home, three blocks away. By the time I got there, everything was closed down. All the streets behind the temple and all around. Police were everywhere, in camouflage. It looked like a war. It was sort of a war.

At 5:30 that afternoon, there was a vigil in the middle of Squirrel Hill. As I was walking up to it, the streets were empty, as quiet as they are during the Super Bowl. Then I saw people coming together, streaming from everywhere. It was very clear. It was very somber.

DS: I was at the gym, on the elliptical, just as I was when the Twin Towers were attacked. A friend of mine called me; he saw the police leaving. I got dressed immediately. I drove home, then I went to the office. My job was there.

CS: The news went out like a bolt of lightning.

JE: How did you mobilize your staff?

DS: When you have a staff of committed journalists, they don’t have to be mobilized. They flooded into the office. Just came in. We have one young journalist who lives very close by, another whose mother had lunch with two of the victims every day for many years.

JE: What were your reactions as a Catholic? As a Jew?

CS: I don’t think I viewed this as a Catholic. I have been deeply marinated in Judaism. We have virulent anti-Semitism here. How could that be possible? I thought of my daughters. They would be so broken about this. They weren’t born here but they definitely view it as home.

I love both traditions. For the past 16 years, since we’ve been here, Judaism has been a central theme in our family.

JE: And David, yours as a Jew?

DS: Questioning authority. Questioning society. Teaching and sharing messages of hope and compassion. They are the same.

CS: I would add comfort.

JE: Did this attack change your perspective of what it’s like to be a Jew in America?

DS: It was clear in a newsroom with an unusually small group of Jewish journalists what my identity was. It would stun, horrify and amuse my rabbi daughter to know that I was regarded as the authority on Jewish ritual and Jewish life!

JE: Cindy, did something shift for you?

CS: Anything that people who are not Jewish read about World War II, and the ghetto — you just had this feeling. Oh my God. This feels like that. It’s a tremendously scary feeling. It is also one that makes people feel hopeless and, on other hand, energized. That it’s time to stand tall for the truth.

What bothers me the most is that the people who were shot, most of them, were elderly. Temples in America are hard to sustain; they don’t have enough young people. These were bulwarks of that temple. Killing 11 people who are so defenseless and elderly — that’s a different kind of sin.

JE: As journalists, you are both standing at the intersection of two powerful trends: the rise of anti-Semitism and the demonization of the media. How do you assess this moment?

DS: If you believe as journalists in the Bill of Rights — where the freedom of religion is even before freedom of the press — and the Declaration of Independence, and the tenets of our system, then you believe you have this obligation and role in this society that is sacred, noble and ennobling. And those are many of the tenets of Judaism.

JE: Has the city of Pittsburgh come together in a way that surprised you?

CS: There is a lot of interfaith connection, so it’s not that unusual to see that here. The imam was at services last night. There are connections made over years because people have lived here for years. They have been deeply invested in community for generations. They already work together. They are just going to get more people involved. And a lot of charitable contributions, particularly for refugees.

DS: This community was together beforehand. And so it was not ready for this, but it was positioned for this.

DS: I’m going back to the office.