Why Pittsburgh Paper’s ‘Kaddish’ Headline Is So Meaningful

For many, the Pittsburgh Post-Gazette’s front page of November 2, 2018 has entered those ranks. Entering the first Shabbat since 11 congregants were murdered by a gunman at the Tree of Life synagogue, the paper printed a show of extraordinary empathy.

In Hebrew lettering, the Gazette splashed the first four words of the Kaddish beneath the dateline: Yitgadal v’yitkadash shmai rabah. “These are the first words of the Jewish mourners’ prayer. ‘Magnified and sanctified be Your name,’ to be recited tonight on the first Sabbath since the tragedy at Tree of Life,” read a subtitle.

The reaction was immediate. On social media, the headline was heralded as a powerful show of solidarity not only with Pittsburgh’s Jewish community, but also with Jews across the country. On the Post-Gazette’s website, the same four words appeared in Hebrew on every page, sharing a banner with the paper’s own name. (The start of the prayer is in Aramaic, a language that uses the Hebrew alphabet.) The implication was clear: Jewish and not, the city would mourn the massacre’s victims in the language of the faith that each of them held dear.

Part of the gesture’s impact came down to the fact that it’s rare to see a mainstream English-language publication so prominently display another language.

Georgia Higley, Head of the Library of Congress’s Newspaper Section, said there’s no simple way to search newspaper archives for examples of English-language American newspapers writing either headlines or articles in foreign languages. But two headlines from American history paint an interesting picture of the circumstances that prompt editors to take the technically tricky step of printing in Hebrew. On September 9, 1934 — erev Rosh Hashanah — the front page of the Detroit Free Press’s sports section wished star baseball player Hank Greenberg, to use the Free Press transliteration, Leshono tovo tikosayvu. (Their English translation of the phrase: “Happy New Year.”) The transliteration was printed beneath the greeting as written in Hebrew, presumably so Greenberg fans could get it right should they happen to see him around. 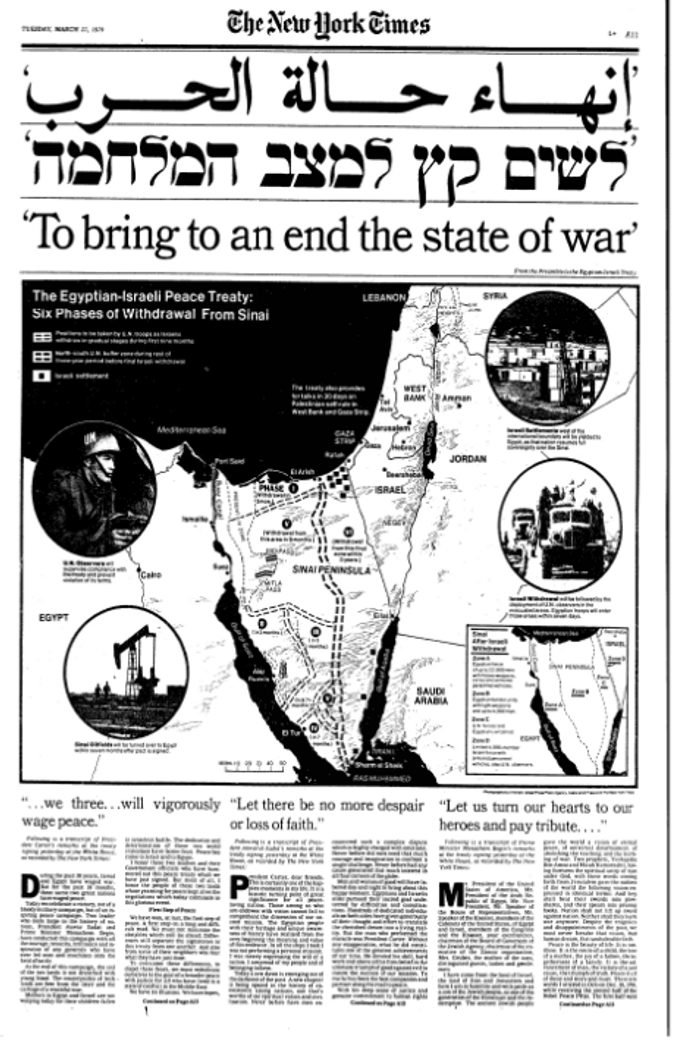 Then, on March 27, 1979, The New York Times covered the meeting of Israeli prime minister Menachem Begin with Egyptian president Anwar Sadat with a trilingual headline on page A11. Times archivist Jeff Roth said that the English-Arabic-Hebrew banner, designed by then-Times art director Lou Silverstein, “was a first” for the paper. “To bring an end to the state of war,” it read.

“It was a rare opportunity to use type as an abstract graphic form while at the same time conveying an idea,” Silverstein said at the time.

Beyond the Free Press’s Rosh Hashanah greetings and The Times’s Begin-Sadat coverage, Higley cited some noteworthy examples of American newspapers printing parts of their issues in languages other than their standard. Each was radical.

“A Pacific Commercial Advertiser in the mid-1850s republished the first issue of a Hawaiian newspaper,” she said. That Hawaiian newspaper was published in the local language, and its archives have since been lost, making the English-language Advertiser’s reprint the only surviving record of the issue. “To me, by them including it they were making a statement about the importance of the native Hawaiians,” Higley said.

When a newspaper prints in multiple languages, she indicated, it’s usually for a clearly defined reason. Higley brought up The Cherokee Phoenix, the first Native American newspaper in the U.S. “From the late 1820s, early 1830s,” she said, as governmental forced relocation programs began, “they deliberately produced a bilingual paper, because part of their intent was to make sure that their paper got circulated in the English speaking community. This was before the Trail of Tears.”

In the context of that history, Higley said, the Post-Gazette’s choice sent a very clear message. “It’s a logical choice as a way to show solidarity,” she said.

“It’s almost similar to the use of mourning bars that newspapers did traditionally — in Britain as early as the 17th century — where they used dark black lines down each of the columns of the paper that communicated to people [that] someone has died,” she said. Mourning bars, which were used through most of the 20th century and even by some papers in the wake of the terrorist attacks of 9/11, were also occasionally used to signal a more abstract tragedy.

“The Pennsylvania Journal in 1765, for when the Stamp Act was passed, took the mourning bars and put it on their paper,” Higley said. “They were in essence saying they thought it would be the death of newspapers. They wouldn’t be able to afford the paper to print on.”

Other papers took their lead. “It was the thought that an institution, [or] an ideal, could die,” Higley said.

The Post-Gazette’s Kaddish seems to signify something slightly different: That while the individual victims of the Tree of Life massacre must and will be mourned, Pittsburgh will step forward to support its Jewish community and that community’s institutions. Rather than mourning the death of an ideal, the headline meaningfully affirms one.

Correction, November 5 2018, 1:50 pm: A previous version of this article attributed a quote to Jeff Roth that was in fact by Lou Silverstein.

Why Pittsburgh Paper’s ‘Kaddish’ Headline Is So Meaningful