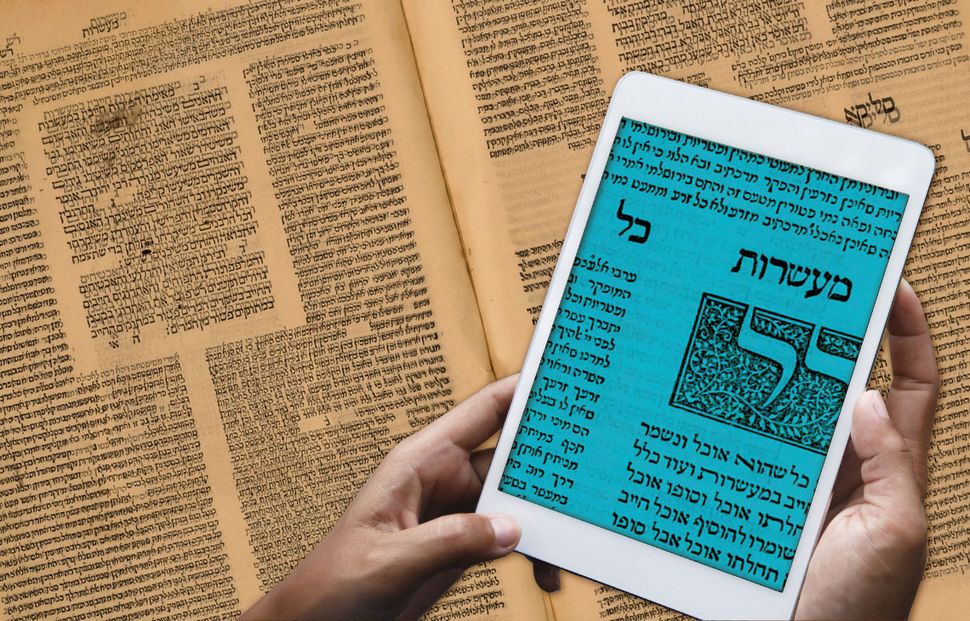 Gray’s Anatomy. Roget’s Thesaurus. Bartlett’s Familiar Quotations. Some reference books are so famous, they are known simply by the last name of their author.

Add to that list Jastrow’s, a dictionary of the Talmud. Long a requirement for Anglophone students of Jewish law, Rabbi Marcus Jastrow’s two-volume work — and its entries for 35,000 words — was recently digitized by Sefaria, a free online library of Jewish texts.

“[The Jastrow] is one of those resources that everyone can use,” said David Gilner, who retired last year as director of the libraries of the Hebrew Union College-Jewish Institute Religion system. “If you pick it up, you open it up, you look up a word, without too much difficulty it tells you what you got, and probably what you’re looking for.”

Modern academic scholars of Talmud have largely moved on from Jastrow to more specialized lexicons. But the digitization is helpful for teachers and students who may not have access to a print library of Talmud texts and resources. And while Sefaria’s update has helped make the study of Jewish law and its most canonical text even more accessible, some teachers say that off-line learning is still the gold standard for the Talmud, which rewards close study with other fellow learners.

“Sitting across from someone with a sefer [book of Talmud] in your hand can really be a transformative experience,” said Rabbi Benay Lappe, the founder of the queer yeshiva SVARA, in Chicago.

The 63 sections of the Talmud describe the discussions and opinions of ancient rabbis about how to apply laws from the Torah to the lives of everyday Jews. Once an oral tradition, it was written down in the first centuries of the Common Era. Since then, there have been innumerable commentaries written on the Talmud, from sages like Rashi to virtual unknowns — many of which have been digitized by Sefaria.

Jastrow, born in Germany in 1829, cemented his place in the tradition of Talmudic scholarship with his dictionary, a nearly twenty-year effort that he began while recovering from an illness. Born in Europe, Jastrow was also a Polish patriot who ended up presiding over a progressive pulpit in Philadelphia’s historic Rodeph Shalom synagogue. There, he oversaw the end of its women’s gallery and the installation of its organ.

His dictionary is pithy, comprehensive and flawed. A typical entry — such as for the word טוּמְעָא — features its root (טְמַע), its meaning (a hidden place, or a secret treasure) and its location in the Jewish canon (the Book of Job). Other entries might have guesses as to the words’ etymology, most of which are now considered inaccurate, according to Stephen Kaufman, a professor emeritus of Aramaic at HUC-JIR in Cincinnati.

Sefaria’s road to bringing the Jastrow online cost the organization $150,000, according to Lev Israel, Sefaria’s chief data officer. Sefaria reported $4.3 million in assets in 2016, according to tax filings. The first step was simply to get the book, comprising 2.5 million words, from print to digital form — a monumental task, because of the complexity of the source text.

“It’s Hebrew letters, with dots and punctuation, in Aramaic words, mixed in with English,” Israel said, adding that the text has lots of diacritics, transliterated Hebrew words and abbreviations for English words (not all of which are listed).

Sefaria contracted that part out to a data conversion firm based in Queens, who in turn hired workers in India. Israel said that the Indian workers were particularly helpful because, since they didn’t know the Hebrew alphabet, they were less inclined to speed through the book and make a mistake when checking the digital copy against the original.

Then Sefaria built the online interface for the dictionary, and integrated the Jastrow with the rest of their digitized texts. Though the dictionary had been digitized before, Sefaria’s version is linked, word-by-word, to many of the 176 million words of Jewish texts on the site, and has technology that makes it accessible to people with impaired vision.

Despite not receiving an updated edition since its first printing 115 years ago, the Jastrow is close to mandatory for lay scholars of biblical texts. Even many first-year rabbinical students are required to buy the book for Talmud classes or a class that covers Aramaic, the language of the Talmud. (A hardcover copy from Amazon costs $44.95.)

Nowadays, academic scholars substitute dictionaries of the specific Aramaic dialects of the various texts in the Jewish legal canon for the comparatively imprecise Jastrow. That has not dimmed Jastrow’s utility for most everybody else.

“Now I can get on a plane, or go home without stacking a ton of books into my briefcase, and do a lot of really good work,” Rabbi Batsheva Appel, leader of Temple Emanu-El in Tucson, Arizona, said of Sefaria’s Jastrow update. Appel said that she is always looking out for what she calls the “Jastrow bonus”: when the usage example for the word you are looking up comes from the verse in which you found that particular word.

Michal Bar-Asher Siegal, a professor of Judaic studies at Ben Gurion University of the Negev, in Beersheva, Israel, said that the addition of the Jastrow will help further democratize Talmud study — a practice that for thousands of years was reserved for men.

“As a professor, I am overjoyed by this tool at the hands of my students, both Israeli and American, Jews and non-Jews, academic and non-academic, in universities, in schuls, [sic] and in divinity schools,” Siegal wrote in an email.

The availability of the Jastrow and other texts online also allows people to stay connected despite being far from centers of Jewish learning. Israel said that Sefaria recently received a testimonial from a man in the U.S. Air Force who said he has used the site while deployed overseas.

But even with the dictionaries online and searchable, some will prefer to continue learning the old-fashioned way. Lappe, of SVARA, says that her students and fellow teachers use Sefaria as a resource outside the classroom, and said she appreciates that it is very useful for people with disabilities. But she considers Talmud learning a spiritual practice, one that is facilitated by learning, off-line, in chevruta, the traditional Jewish learning partnership.

Lappe said that the use of digital dictionaries and other reference books can impair the Talmud learning experience, by allowing students and teachers to take shortcuts.

“The meaning that we’re after is what the text pulls out of you while you’re figuring out what the text says,” she said. “If I’m going to go look up a translation, that’s going to short circuit the discovery that can happen with my students.”

Yet, as Kaufman, of HUC-JIR, notes, there will always be aspiring Talmud scholars who need the Jastrow’s help in a confrontation with a rare or unusually conjugated Aramaic verb — a confrontation that will go much more smoothly with the reference in digital form.

“So you make a stab, make a guess, look under this rug,” Kaufman said. “But if you can search the actual passage, and see that it’s cited in the Jastrow dictionary, then you have a much better chance of working with it.”