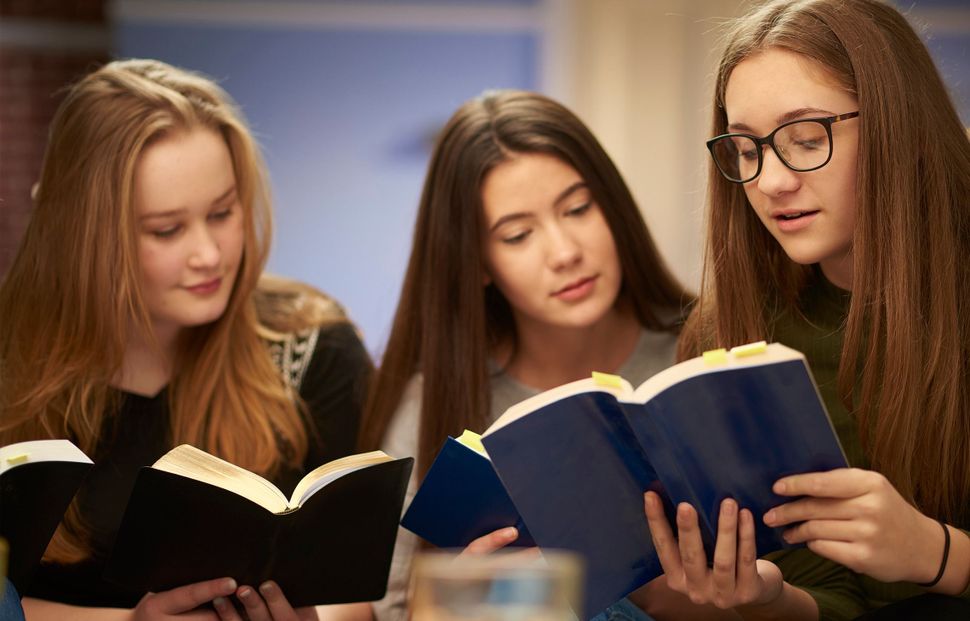 “This Siddur seeks to reflect a sensitivity to women’s prayer experiences.”

That understated line is nestled in the editor’s introduction to a Modern Orthodox group’s new siddur, or prayer book. It’s part of a short, scholarly bullet point outlining how the siddur accommodates women through its textual and grammatical updates.

Many of those updates, however, are unprecedented for an Orthodox siddur. The book provides the text for a group of women saying the blessing after a meal, usually ommitted with the assumption that a man will nearly always lead that prayer. References to “gentlemen” have been changed to “esteemed companions.” The commentary and supplemental essays make use of female scholarship.

“It’s a recognition of who’s in the room, which is really important,” said Rabba Sara Hurwitz, president of Yeshivat Maharat, the only Orthodox yeshiva that ordains female clergy.

Despite the book’s inclusivity, there are some lines it does not cross. Its publication comes as Modern Orthodoxy’s leading institutions are divided on the question of whether women can be faith leaders — an issue the book sidesteps completely. The siddur’s creators say they did as much as they could for women within the boundaries of Jewish law, and that hotly contested issues like female clergy are best left out of a siddur.

“None of this is revolutionary,” said Mark Dratch, the executive vice president of the Rabbinical Council of America, which developed the siddur. “There’s no agenda here in terms of some of the more envelope-pushing or cutting-edge types of issues.”

A new prayer book can be a seismic event. Overhauls to long-treasured siddurim can take years of dedicated work by a team of rabbis. The rabbinical associations of the Reform, Conservative and Orthodox movements have only seldom come out with new prayer books or a new chumash, which holds the weekly Torah readings.

The traditional siddur’s Hebrew text presents challenges for rabbis looking for inclusive liturgy. Hebrew is a gendered language; the words for God are nearly all masculine. The process of correcting for this perceived imbalance started years ago among the more liberal Jewish denominations. In 2007, the Reform movement removed gendered references to God from the English in its new siddur. In 2016, the Conservative movement’s Siddur Lev Shalem did the same, for instance calling God “sovereign” instead of “king.”

Now, the RCA’s new “Siddur Avodat Halev” — “the work of the heart” — continues that trend. It is aimed at American Modern Orthodox Jews, an observant and wealthy segment of Judaism that values participation in secular culture and professional life while keeping kosher and refraining from work on the Sabbath. There are an estimated 160,000 Modern Orthodox Jews in the U.S., according to estimates from the Pew Research Center, mostly congregated in New York City, with smaller concentrations in Baltimore, Chicago and Los Angeles. For comparison, there are about 1.9 million American Jews who consider themselves to be Reform, according to the Pew Research Center.

Besides the changes geared toward women, the new siddur, like its predecessors in the Reform and Conservative movements, broadly focuses on incorporating new commentary and translation to complement the centuries-old liturgy. It’s replete with notes for nearly every prayer, and includes rabbinic insight into lifecycle traditions like weddings, brises and b’nai mitzvahs.

The features aimed at female congregants are about “sensitivity,” said Rabbi Basil Herring, the siddur’s editor — though they’re not only for women. The siddur, he said, is “not just women-friendly, but sensitizing men and women to the importance of women in prayer.”

In its Hebrew text, prayers written in first person offer optional feminized verbs. Subtler textual changes include showing the feminized words a prayer leader would say for a woman requesting a misheberach, the prayer for the sick.

Perhaps the single most important textual update in the book has to do with the prayer after eating, birkat hamazon. While there is a rabbinically accepted formula for how to begin the prayer when the participants are only women, that text is nearly impossible to find in any Orthodox siddur. “Avodat Halev” has that text, and a note explaining the halacha, or religious law, behind it. For good measure, it includes, in Hebrew, the feminized version of the words “head of the household” — recognizing that such a role can be occupied by women.

“It represents an acknowledgment of women as religious actors without the presence of men,” Dvora Weisberg, the director of rabbinical studies at Hebrew Union College-Jewish Institute of Religion in Los Angeles, said of the siddur’s birkat hamazon text.

In the siddur’s English translation, gender-neutral pronouns are used wherever possible. That, Weisberg says, shows that the RCA understands how sensitive people are to the question of gender in Judaism.

“The fact that they chose to do that, it says something about what’s become normative,” said Weisberg, who has not seen a final copy of the siddur.

The siddur also has commentary and supplementary essays from female scholars like the legendary bible teacher Nechama Lebowitz, the historian Yaffa Eliach and the Yeshiva University professor Deena Rabinovich — a rarity for an Orthodox book.

“Having a little girl read commentary that’s written in the voice of women will help her see herself as not just reading prayers, but also” as a potential scholar herself, said Hurwitz, who also has not seen an advance copy of the siddur.

One particular bit of commentary notes that women should always seek a halachic prenuptial agreement, to make sure that they will not get stuck being an agunah, a woman whose husband won’t grant her a divorce. Weisberg called that addition — something unlikely to be found in other Orthodox siddurim — a “pretty powerful statement.”

The siddur is something of a partial answer to Modern Orthodoxy’s increasing acceptance of women as faith leaders. About half are supportive of women having at least some clergy roles, and a little over a third want women to be able to have rabbinic authority, according to a report from the Jewish polling firm Nishma Research. But it is a highly fraught issue for Modern Orthodoxy’s institutions. The Orthodox Union, Modern Orthodoxy’s synagogue association, announced in in 2017 it would ban synagogues that hired female clergy — a ban it has not enforced due to the backlash its announcement generated. Graduates from one liberal Orthodox seminary, Yeshivat Chovevei Torah, have faced scrutiny from more traditional Modern Orthodox communities due to their alma mater’s association with Yeshivat Maharat, which ordains women.

But the RCA’s new siddur, while offering more ways for women to feel like equal participants in a prayer service, does not acknowledge the possibility that they might lead a prayer service. That is by design, according to Herring.

“This siddur is not a political statement,” said Herring, who added that work on the siddur took ten years. “It’s simply looking to advance women’s prayer.”

Herring said that the siddur is meant essentially to do as much for women as is allowable under the RCA’s accepted standards of halacha. Within those parameters, women are allowed to have scholarly input, lead the blessing after meals amongst themselves and request a prayer for a sick friend or relative.

While “Avodat Halev” may be one of the most forward-looking siddurim published in Orthodoxy, it is not clear that it will see immediate widespread usage. It was preceded, by nearly a decade, by Koren Publishing’s popular Sacks siddur, named for the former chief rabbi of British Jewry, Jonathan Sacks. That book was meant to address, in part, the wish in Modern Orthodox synagogues for a siddur that has references to and prayers for Israel. The RCA’s last siddur, published by ArtScroll in 1987, only mentioned Israel on one page. ArtScroll’s siddur template is more geared toward the ultra-Orthodox world, where Zionism is not a given.

Many Modern Orthodox communities switched to the Koren Sacks siddur years ago. The new RCA siddur’s changes for women — not present in the Sacks — may not be enough to convince communities to pay for new siddurim for the second time in ten years, said Rabbi Mitchell Wohlberg.

“There are parts in the [RCA] siddur that meet the needs of women, but I would not tell you that that’s a make-or-break,” said Wohlberg, who leads Beth Tfiloh in Baltimore, one of the largest Modern Orthodox synagogues in the country. “In all probability, it will be significant because of the message it sends, and not so much of the use that’s made of it.”

Koren is also publishing the new RCA siddur. The company said the first print run will include 10,000 copies, and that about half have already been pre-ordered. Books will hit store shelves in July.

Rabbi Yoel Schonfeld, senior rabbi at Young Israel of Kew Gardens Hills in New York, said that his synagogue will be sticking with the classic ArtScroll siddur. While part of that has to do with the cost of new siddurim, Schonfeld said that his community is very conservative, and was not swayed by the updates for female congregants.

“I’m not against what they’ve done, it sounds very noble. But for me it wasn’t an attraction,” he said. “We don’t find the need to reinvent the wheel here.”

One congregation that has already put its order in is Young Israel of Century City, in California. Its rabbi, Elazar Muskin, is the current president of the RCA. The 500-household synagogue ordered 1,000 copies.

Muskin said his congregation is excited that the new siddur is “a woman friendly siddur, according to halacha.”

“Once it gets on the shelves, and people can really hold it, smell it feel it, then it takes on its own life, and I think it will,” Muskin said.