Chabad’s Helicopter Gelt Drop Is Great For Hanukkah – Or Is It? 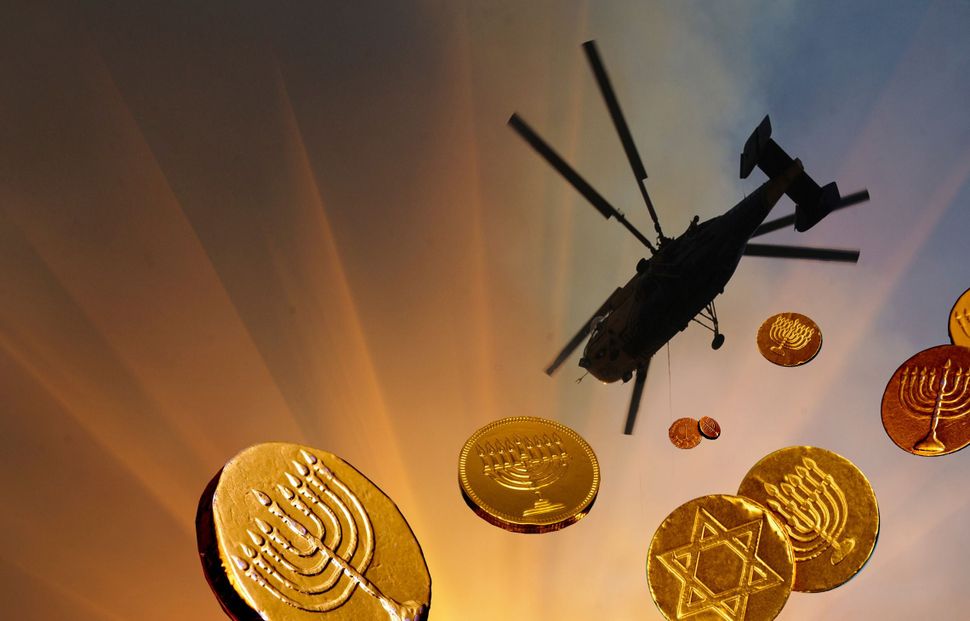 See the helicopter, hovering low above a grassy field ringed with children jonesing for a sugar rush. Watch pounds and pounds of gelt — chocolate coins in metallic foil — dumped out of said helicopter. Observe the children descend on the fallen gelt like Israelites on manna from heaven.

If you happen to be in Jacksonville, Florida or Munster, Indiana, over Hanukkah this year, you might catch a glimpse of one of the most eccentric new holiday stunts to be found in a country that has turned Christmas lights into surreal seasonal spectacle: the Hanukkah helicopter gelt drop.

Six years after its inaugural run, in Jupiter, Florida the gelt drop has spread to at least four new locations. Yet it has also aroused local opposition in one Ohio community, where residents said the seemingly lighthearted stunt raises serious issues — about stereotypes, safety and money. Most of all, the question of how to get young Jews’ attention without diluting the substance of religious life is all wrapped up in that shiny, pretty foil.

“It’s almost as if us Jews are saying to our Christian neighbors, ‘So you’ve got a big, beautiful tree? Nice. But have you seen our… Hanukopter!?’ said Kenny Steinman, a former president at a Columbus synagogue.

Yet regardless of the optics, it may be too late to stop the flight of the Hanukopters.

“We started a trend,” said Sarah Barash, the co-director of Chabad of Jupiter, who first came up with the idea.

Sarah and her husband, Rabbi Berel Barash, are emissaries — shluchim in Hebrew — for Chabad, the international Hasidic Orthodox group that tasks its representatives with encouraging Jews around the world to take on more religious observance. Chabad has over 5,600 emissaries in over 100 countries who follow the precepts of the movement’s late rebbe, Rabbi Menachem Mendel Schneerson, who taught that the best way to strengthen Judaism is to meet Jews where they are — and then help them enjoy becoming more traditionally observant. While those meetings often happen on the street, to the annoyance of some, local Chabad centers around the country also host community-wide holiday events.

Chabad of Jupiter has sponsored an annual menorah lighting for fifteen years. Sarah, who is also a realtor, said that she had the idea to drop chocolate out of a helicopter in 2012, as a response to Hanukkah celebration competition in the town.

“We were really the only outdoor public menorah lighting in Jupiter,” she said. “Then more started happening, so we had to kick it up a notch.”

The history of Hanukkah in America is as a holiday designed to make children happy, according to Dianne Ashton, a professor of Jewish studies at Rowan University and the author of “Hanukkah in America.” The beauty of the holiday, she noted, is that there’s not much to it: You light candles and you eat latkes, or maybe jelly doughnuts. That leaves a lot of room to innovate, and make things up as you go along, consulting the preferences of your community.

“What I’ve noticed is that with each embellishment, there is enthusiasm for doing it, and there’s also somebody who says, ‘That’s ridiculous, why are we doing that, it’s only Hanukkah,” Ashton said.

Sarah took her inspiration from helicopter golf ball drops, when numbered golf balls are spilled onto a putting green and observers can bet on which ball will land in the hole.

“I did some research, and realized we could drop chocolate from helicopters instead,” she said.

The task was easily done in Jupiter, where Berel found a nearby helicopter charter service that charged them $150 for use of the helicopter for a half hour.

“I bring them a box of chocolates, and then they just take care of it,” Berel said.

The next year Sarah shared the event in a thread on successful Hanukkah celebrations in a Facebook page for Chabad emissaries. It spread to other Chabad chapters seeking to replicate the falling chocolate extravaganza.

Hindy Plotkin, co-director of the Chabad center in Greensboro, North Carolina, organized a gelt drop in 2015. It hasn’t happened since then, because rules about helicopter use in Greensboro apparently changed. Though she wouldn’t say how much it cost, she said she had found a company to do it for next year who would charge $600 — less than what she paid in 2015.

She also said that she didn’t hear any controversy over the drop three years ago.

“Someone mentioned that they were a little nervous, and wanted to know if we had insurance,” she said.

Plotkin told her friend in Knoxville, Tennessee about it: Miriam Esther Wilhelm, co-director of the Chabad center there and head of the Knoxville Jewish Day School. Wilhelm said they contracted with a company that does helicopter tours of the Smoky Mountains — for $1,000. The family that donated the money to cover the drop got to ride in the helicopter and dump out the designated 40 pounds of gelt.

They almost had a safety issue. After the drop began, there was a lull in the waterfall of chocolate coins. The kids then rushed in for the candy. But there was more gelt to come, and the family in the helicopter decided to continue disposing of it. Thankfully, Plotkin says, the coins were too light to hurt anyone.

The event has mostly taken place in either suburban areas or smaller cities. This year’s drop in Munster is set to be the coldest. But of the five drops happening this year, three are in Florida.

“Florida is the ideal place,” Berel said. “There’s a lot of airports, and the weather is right.”

But when the drop came to Columbus — specifically to Bexley, a heavily Jewish suburb of the city — some in the Jewish community reacted negatively. There, residents decried the rush for gelt as the enactment of the pernicious anti-Semitic stereotype of the money-grubbing Jew.

Several people posted on Facebook hinting that the drop reminded them of an Arkansas town’s infamous habit of dropping turkeys out of an airplane for Thanksgiving.

Last week Chabad agreed to change the items to be dropped from a reported 6,000 pieces of gelt to a load of dreidels. 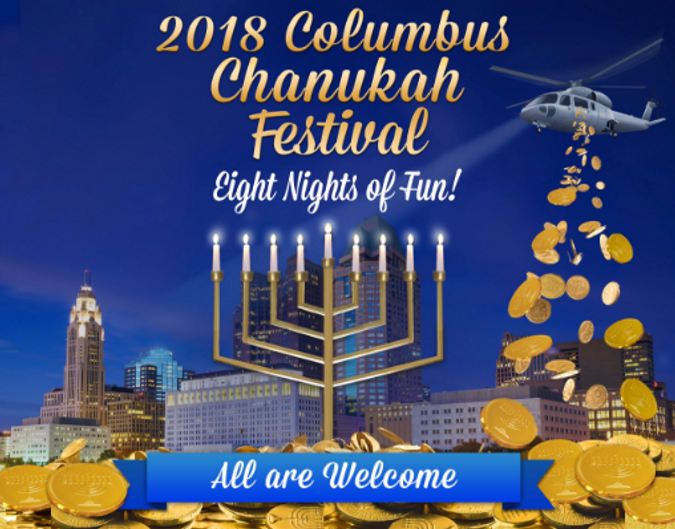 The original poster for Columbus’ gelt drop, before it was changed to dreidels. Image by Chabad Columbus

“It makes me sad that stereotypes abound about our people and influence how we choose to celebrate a holiday that ultimately is about religious freedom,” Rabbi Areyeh Kaltmann, co-director of the Chabad in Columbus, who planned the gelt drop, wrote in an email to the Forward. (He got the idea for the program directly from Berel Barash.)

“Given the recent tragedy in Pittsburgh, it is even more important than ever for everyone – especially our kids – to embrace light, goodness, kindness and unity – all symbols of Chanukah,” he added.

Berel said that there’s nothing wrong with making Hanukkah fun for its own sake.

“It shouldn’t just be going to worship or lighting candles,” he said. “That way kids associate Judaism with excitement. And hopefully when they mature, that excitement stays.”

“That’s a souped-up version of heightening the materialism of Hanukkah, but it doesn’t provide any added meaning or relevance to [kids’] lives,” said Abby Kerbel, the education and leadership outreach manager for the Conservative movement’s youth network. She also questioned whether the gelt drop — itself a celebrate of abundance through the symbol of money — was a good use of funds.

Nonetheless, the gelt drop seems likely to spread, spurred not only by the Chabad emissaries’ zeal for eye-catching holiday celebrations, but also by their demographics: Miriam Wilhelm, of Knoxville, said she and her husband shared the idea with their siblings, who collectively represent 16 total Chabad centers.

Some Chabad centers and Jewish communities will be opting for a less extravagant drop: the increasingly popular fire-truck-ladder gelt drop.

“That’s the latest gig,” said Hindy Plotkin, of Greensboro. “Not as expensive as the helicopter.”

In Jupiter, Berel and Sarah Barash decided to go with what they know. They did the drop Sunday evening, on the first night of Hanukkah.

“The forecast has a high of 82 degrees,” Berel said ahead of the event. “Hopefully the chocolate doesn’t melt.”

Chabad’s Helicopter Gelt Drop Is Great For Hanukkah – Or Is It?