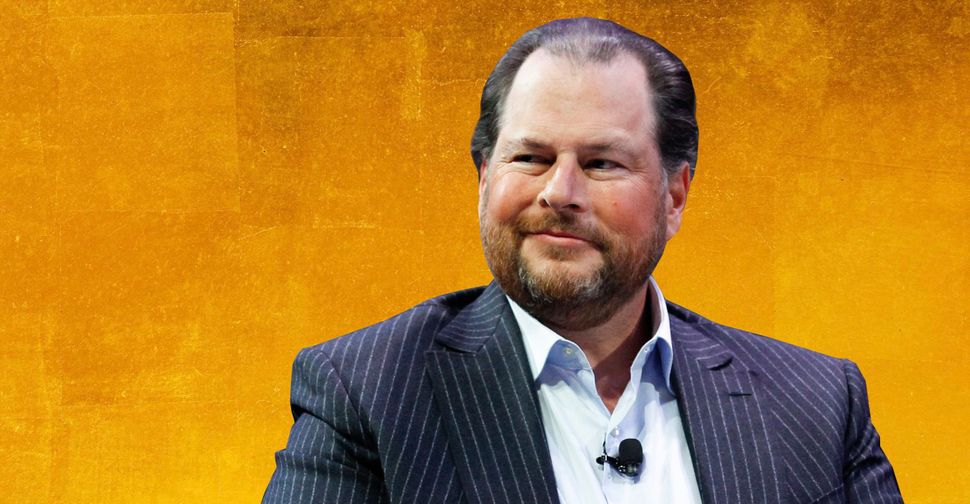 Marc Benioff burnt out at a tech firm in his early 30s, so he went to Hawaii to meditate, and then on to India. While he was there, between audiences with gurus and visits to ashrams, he had an epiphany.

It was a vision, he told the New York Times this year, of what the “future of the internet was going to be in regards to software-as-a-service and cloud computing.”

Not your normal take-away from a journal of spiritual discovery, perhaps, but, as it turns out, a highly profitable one.

That epiphany transformed Benioff from a young tech executive into a billionaire mogul with a Hawaiian estate of his own. Today, Benioff, 54, is worth $5.7 billion, according to Forbes. The company he started upon his return from India, Salesforce, has annual revenues of more than $10 billion.

In 2018, a year in which one tech CEO after another was exposed as a dope or a creep, Benioff was the rare Silicon Valley mega-capitalist who came out looking pretty good. Benioff called out other tech billionaires for opposing a tax to fund homeless services in San Francisco, while buying and promising significant resources to revive Time magazine, the struggling old newstand warhorse.

He’s done it all with the sort of talk first, think later approach to speaking in public that gives aneurysms to public relation flacks but great copy to media hacks.

“I live with a beginner’s mind,” he told the New York Times, hours before his purchase of Time magazine was announced. “I didn’t realize two weeks ago I was going to buy Time.”

Among Jewish tech billionaires named Mark (or Marc), of which there are at least three, Benioff is the Jimmy Buffet to Cuban’s Jimmy Kimmel and Zuckerberg’s Jimmy Neutron. Newspaper writers like to describe him as gregarious. He’s a big guy who wears Tommy Bahama shirts and tan fedoras, blows the shofar at his Reform synagogue in San Francisco on the High Holidays, and spends two months each year on the beach in Hawaii.

At times, his efforts to affect a Margaritaville lifestyle can be awkward. In September, the Guardian reported that, at the height of the family separation crisis on the U.S. border, Benioff had told immigrant advocacy groups he had to cancel a meeting because he was busy on the beach. “I am sorry I’m actually scuba diving right now,” Benioff wrote in an email.

Benioff had reached out to the immigrant groups amid a small revolt by Salesforce employees unhappy that the company was providing services to the U.S. border authorities implementing the family separation program. One immigrant advocacy group rejected a $250,000 donation from Salesforce amid the controversy.

Yet the bad blood with progressives over the Customs and Border Protection contract seemed to be forgotten by the fall, as Benioff emerged as a scourge of his fellow San Francisco billionaires. Benioff came down hard on wealthy San Franciscans and their tech firms who opposed a proposed tax to help address the city’s spiraling homelessness crisis. As one tech titan after another weighed in against the tax, Benioff unleashed on them. He told off Twitter CEO Jack Dorsey on Dorsey’s own social media platform. “I know who is willing to give money, and who isn’t,” Benioff said in October. “There’s a group of people in the city who give nothing based on the level of wealth they have. You’re either for the kids, the homeless and the hospitals, or you’re for yourself.”

In November, the tax was approved. “I had the priests and I had the rabbis and the imams and all that helping me. But there were no CEOs on my side,” he told Recode. “I was the only CEO.”

The announcement that Benioff would buy Time magazine came in September, after months of speculation about the future of the storied publication. Benioff is joining a growing list of 21st century press barons; tech billionaires sweeping in to save the media institutions whose business models their own industry destroyed. Benioff hasn’t said much about his vision for Time. He was slippery in a text message interview he gave to the New York Times in September while lying on a massage table at a spa. “I’m not going to get involved operationally,” he typed. “We don’t get operationally involved in our investments. I’m busy enough with my job. They have a great team. It’s a very strong business. Very profitable.”

When Recode’s Kara Swisher asked him months later what his role would be at the magazine, Benioff evaded her, too. “I’m the inspiring visionary!” he said.