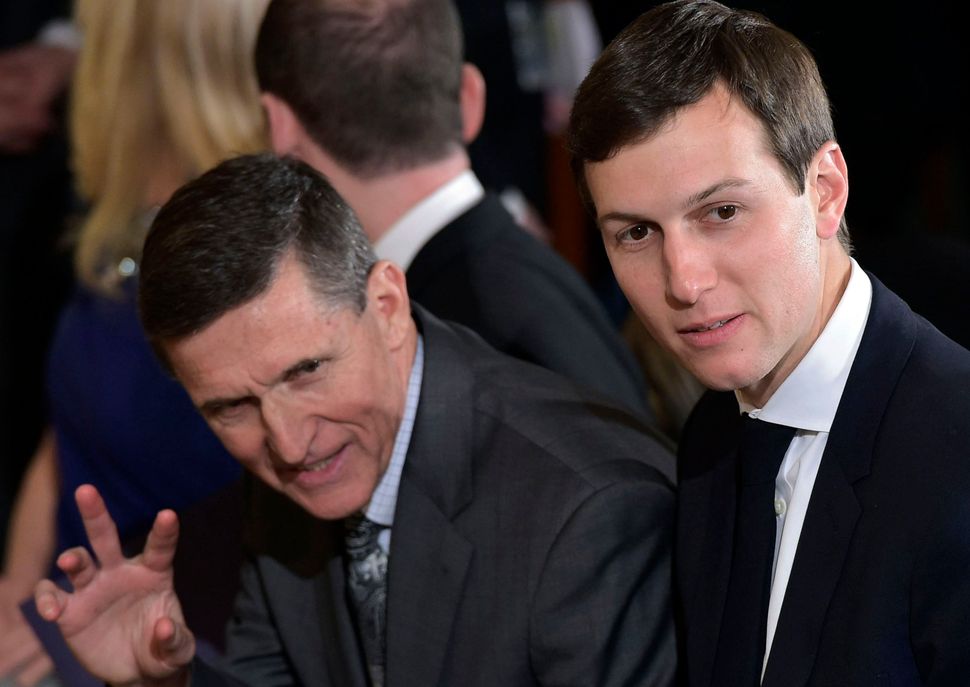 Special Counsel Robert Mueller declared in a new court filing that former National Security Advisor Michael Flynn should not serve time in prison because of his “substantial assistance” with investigators — including sharing information on the Trump presidential transition team’s efforts to stop an anti-Israel resolution at the United Nations Security Council.

Although it does not mention Kushner, the new Mueller document, which is heavily redacted, ominously notes that Flynn has admitted that he lied when he told investigators he never talked to Russian Ambassador Sergey Kislyak about the U.N. vote, or about American sanctions on Moscow.

“Several senior members of the transition team publicly repeated false information conveyed to them by [Flynn] about communications between him and the Russian ambassador regarding sanctions,” it reads. Then it is redacted for four more lines.

The document also says that Flynn assisted in a separate criminal investigation in addition to the inquiry into foreign interference in the 2016 election.

That again strikes many close observers of the Mueller probe as an implicit warning that Kushner may be involved.

“Given that one of Flynn’s main tasks during the transition period was to set up back channel communications between Trump and his Russian handlers that would bypass US intelligence services, it is very likely that the redacted portions of the sentencing memo are related to that endeavor,” Nancy LeTourneau wrote for Washington Monthly. “If so, Jared Kushner has reason to be very concerned.”

Kushner himself has been interviewed by Mueller’s team. CNN reported last year that the conversation was largely about Flynn — which could imperil the First Family member.

“If Flynn offered federal authorities a different version of events than Kushner — and Flynn’s version is buttressed by documentation or federal electronic surveillance of the former general — then the president’s son-in-law may have to start scrambling,” Bloomberg columnist Timothy L. O’Brien wrote.

“If he had information to share with Mueller that hurt the president, you would know it by now,” he told NBC on Tuesday. “There’s a Yiddish word that fits. They don’t have bupkis.”

The Israel connection to Kushner and the Trump/Russia scandal is not news.

After winning election but before taking office, Trump was determined to show that he would be a stronger supporter of Israel than Obama. One of his priorities was to undermine Obama’s decision in his final month in office to abstain on the anti-Israel vote at the U.N. and allow it to pass, rather than veto it.

Haaretz reported that Israeli officials also asked the Trump transition team to try to intervene to stop the resolution.

Russia did not end up delaying the vote, which passed 14-0 with one abstention.

Flynn pleaded guilty in December 2017 to lying to the FBI about his encounters and conversations with Russian officials like Kislyak, the ambassador to the United States. Flynn originally told the FBI that he had no memory of discussing the U.N. resolution with Kislyak, before later recanting and admitting he had lied. Mueller’s document reveals that Flynn eventually sat for 19 interviews with the Special Counsel’s team.

Kislyak, and particularly his connection to Kushner, has been the center of intense speculation as journalists and investigators look at the Trump campaign’s interactions with Russian officials in 2016. According to The Washington Post, Kushner told Kislyak in early December 2016, a few weeks before the U.N. vote, that he wanted to set up a secure line of communication between the transition team and the Kremlin, and house it in a Russian diplomatic facility in the United States. Flynn also attended that meeting.

Kushner also met during the transition with the president of a state-run Russian bank, a meeting that he initially did not report in his security clearance application. The White House says it was a diplomatic meeting taken at Kislyak’s request, while the bank said it was a business meeting in conjunction with Kushner’s real estate work.

Kushner is believed to be the key figure who convinced President Trump to fire FBI director James Comey, which led to the creation of the special counsel’s office in the first place. The circumstances of Comey’s firing are also under investigation by the special counsel.