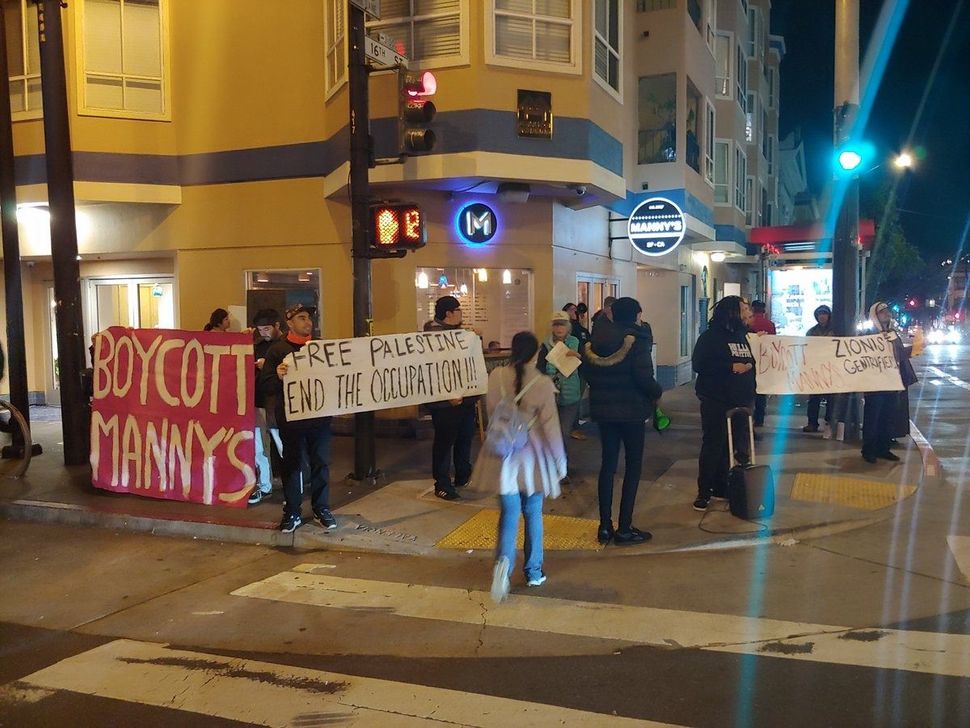 Protesters outside Manny’s in San Francisco Image by Twitter

“Zionists out of the Mission!” one marcher yelled on Wednesday, Dec. 26, as about 20 members of the Lucy Parsons Project and allied groups gathered outside Manny’s.

The self-described “radical black queer direction action group,” named for an early 20th century Latina anarcho-communist labor organizer, has protested at Manny’s every Wednesday this month, and says it will continue protesting every Wednesday until Manny’s is “shut down.” The Project only has about 300 Twitter followers, but among the protest’s supporters is a local rapper, Equipto, with 14,500 followers.

This reporter tweeted at the Lucy Parsons Project on Thursday asking for an interview and was promptly blocked. (The group tweeted on Dec. 21, “We Proudly Block all Zionists.”)

The Bay Area is known for its left-wing politics and history of political activism on a range of issues — including the Israeli-Palestinian conflict.

Jewish Voice for Peace was founded in Oakland. Groups for and against the boycott, divestment and sanctions movement have advertised on area buses. The president of San Francisco State University has repeatedly apologized for anti-Semitic statements made by pro-BDS students and faculty. Local activists have for years protested at stores selling Israeli products like Ahava creams or SodaStream seltzer-makers.

And the Mission District, with its burrito shops and local Latino landmarks abutting pricey townhouses, is Ground Zero for various San Francisco-specific tensions, like gentrification fueled by the region’s tech boom.

None of the events at Manny’s have concerned the Middle East. Instead, the protesters are targeting Yekutiel for his personal support for the existence of the Jewish state.

The Lucy Parsons Project claims that Yekutiel is furthering gentrification in their neighborhood and criticized him for posting things like “Happy 70th Birthday Israel!” and “I am so proud of Israel and its people” on his personal Facebook page. They also wrote that he is “pinkwashing and blackfacing his gentrification and Zionism” by bringing in minority and LGBT guest speakers. (Yekutiel is also gay.)

He grew up in Los Angeles, the son of an American Ashkenazi Jewish mother and an immigrant father whose family fled persecution from Afghanistan to Israel. “I’m proud of their story and proud to be Jewish in America,” he said. At Manny’s, there’s a mezuzah on the door.

After interning in the Obama White House and then working on his reelection campaign, Yekutiel moved to San Francisco and served as the chief of staff at the tech-backed immigration reform group FWD.US before becoming the Silicon Valley fundraising director for the Clinton presidential campaign.

He says part of his passion for social justice comes from the concept of tikkun olam — “Jews have this embedded in their DNA.”

He noticed that after the 2016 election, there were “lots of people who wanted to get more engaged, but didn’t know where to go to do it.” So he conceived of Manny’s as a meeting space for people to learn from politicians, activists and thinkers about current events and get connected with ways to further their civic engagement.

Creating Manny’s took two years: “Over 1,000 people were involved in the building of this space,” he said. He learned how to “Write a business plan. Navigate the permitting process. Help manage a construction process. Start building programming. Hire staff.”

Five hundred people came on opening night to experience the mid-term elections at Manny’s. Events now take place on most nights. The next scheduled event, on Jan. 3 — touching on black trans women’s experiences in the criminal justice system and the creation of a transgender cultural district in Compton — has more than 600 people expressing interest in attending on Facebook. “The History of Prisons in California,” later that month, has 6,000 interested.

Yekutiel is renting his space from the Mission Housing Development Corporation, a local not-for-profit affordable housing development company that owns the 28-unit family apartment building that the ground-floor commercial space is attached to. “100% of [Manny’s] rent goes back into the building, and pays for residential and community services,” Mission Housing executive director Sam Moss told the Forward.

The 5,000 residents across the Mission Housing system also get to go to Manny’s events for free and get discounts on food. Moss said the neighborhood is safer now that Manny’s has replaced the failing restaurant that used to occupy the space.

The protesters have claimed that “no one in the poor/working class brown community asked him to open this gentrifier space.” But according to Moss, that’s not true. More than a dozen neighborhood community leaders came to him gushing about Yekutiel before Moss met him for the first time, he said.

“We are seeing greater and greater ant-Semitism not just in this country but globally,” Yekutiel said. “I do think it’s important for me to be visibly Jewish.”