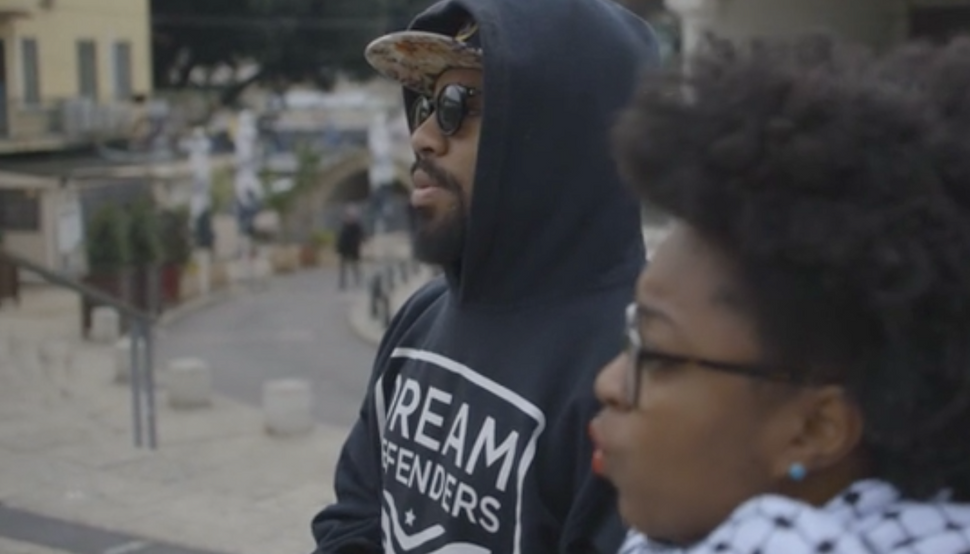 Captured on a 10-minute video, the protest was entitled “Solidarity Demonstration in Nazareth: Ferguson to Palestine” – an effort whose impact on the progressive far left is still being felt today.

While the Brooklyn-based Palestinian-American activist Linda Sarsour has received the bulk of the media spotlight – and heat – for her work intensifying the intersectional connection between minority social justice and black liberation movements and the Palestinian cause, the lesser-known, Florida-based Dream Defenders has also played a central role.

The group was co-founded in 2012 by Ahmad Abuznaid, who led that 2015 trip. The Palestinian-American son of a well-known Palestinian diplomat, he tells Haaretz by telephone that the initial Dream Defenders delegation – and two subsequent ones he led – “have been about reconnecting this current generation of the black liberation movement to the black radical tradition of being internationalist and pro-Palestinian.

“Making that connection has been super-important for the conversations that we are seeing happen right now – whether it’s the dialogues you see happening at the grassroots level in progressive circles across the United States, or in the debates inside the Democratic Party,” he says.

The group’s work in “shifting the conversation” has been on display in recent weeks with the controversy surrounding Marc Lamont Hill, the professor, activist and political commentator who generated headlines in November when he was fired by CNN. The reason? His November 28 speech to the United Nations calling for a “free Palestine from the river to the sea” – remarks interpreted as advocating the elimination of Israel and endorsing Palestinian violence.

Hill actually opens the Dream Defenders’ demonstration. Looking intensely into the camera, he declares: “We come here and we learn laws that have been co-signed in ink but written in the blood of the innocent. And we stand next to people who continue to courageously struggle and resist the occupation.”

Another participant seen dancing the debka in the video also enjoys a prominent place on the national stage: Carmen Perez, head of the Justice League and now a co-chair of the Women’s March. Along with Sarsour and Tamika Mallory, she has come under fire in the past year for maintaining support of Nation of Islam leader and unabashed anti-Semite Louis Farrakhan.

The Dream Defenders also featured in the 2018 midterms, playing a role in one of the election cycle’s hardest-fought races: Tallahassee Mayor Andrew Gillum’s battle to become Florida’s first African-American governor, a race he narrowly lost to Rep. Ron DeSantis.

DeSantis repeatedly slammed Gillum’s signature on a Dream Defenders pledge related to prison reform as an endorsement of the “radical” group’s stance – something DeSantis said portrayed Israel as “a genocidal apartheid state.” The Republican candidate raised the issue at every opportunity, in a clear effort to undermine support for Gillum among Florida’s significant Jewish community.

That forced Gillum to distance himself from the group’s position on the Palestinian issue: The gubernatorial candidate repeatedly declared that, unlike the Dream Defenders, he supports a two-state solution and opposes the boycott, divestment and sanctions movement.

Dream Defenders was founded in 2012, when outraged young activists of color came together following the fatal shooting of 17-year-old Trayvon Martin by white neighborhood watchman George Zimmerman. The group’s first actions were a three-day march protesting Florida’s “stand your ground” laws and a high-profile sit-in at the Florida Statehouse.

The group’s stated goals include an immediate end to all wars and the end of capitalism, imperialism and patriarchy. It is funded through small donations and is also sustained by the Tides Foundation – a large-scale “fiscal sponsor” for progressive groups that is sometimes criticized as “left-wing dark money.” The foundation’s backers include George Soros and the Ford Foundation.

While he says his childhood experiences in East Jerusalem may have played a subconscious, secondary role, his political activism was born in Florida State University when, as a student government leader, he joined the angry protests over the death of Martin Anderson. The 14-year-old died in January 2006 while incarcerated at a boot camp-style youth detention center in Panama City, Florida. The strength of the public outcry resulted in the closure of the state’s five juvenile boot camps by the Florida legislature.

He had originally planned to bring his first Dream Defenders delegation to Palestine in July 2014. However, that trip was postponed when war broke out between Israel and Hamas in Gaza. And then Ferguson exploded the following month, after black teenager Michael Brown was shot by a white police officer.

Events in St. Louis County made Abuznaid’s 2015 trip – which included meetings with BDS co-founder Omar Barghouti and former adviser to Palestinian President Mahmoud Abbas and the PLO Diana Buttu, and a visit to what the group termed the “Afro-Palestinian” community in Jerusalem’s Old City – even more impactful than he had hoped.

Connections between the Black Lives Matter group and Palestinians had intensified when groups of local pro-Palestinian activists appeared at the Ferguson demonstrations in August 2014, some flying the Palestinian flag and chanting “Gaza Strip” during a standoff with armed police on the city’s streets. A long-distance solidarity effort also took place, with Palestinians tweeting supportive advice to protesters on how to deal with tear gas.

“There are always so many parallels to point to when you speak and open these communities up to the Palestinian experience,” Abuznaid says. “The black community, the native indigenous community, the undocumented and Latinx community deal with so many things that are similar to what the Palestinians are dealing with. But in 2014-15, one of the clearest connections was Ferguson. You were literally seeing armored vehicles, tanks, tear gas, SWAT teams, military personnel marching down the streets of Ferguson and … there was a community there that truly, literally felt occupied. There was no clearer connection than that moment,” he says.

Another key intersectional role played by Dream Defenders has been in helping to draft the controversial Israel-Palestine section of the Movement for Black Lives’ platform. (The movement is a wide-ranging coalition that grew out of Black Lives Matter.)

Rachel Gilmer, who was at the time the Dream Defenders’ director of strategy and later became its co-director, co-authored that August 2016 text, which endorses BDS, defines Israel as “an apartheid state with over 50 laws on the books that sanction discrimination,” and states that the United States “justifies and advances the global war on terror via its alliance with Israel and is complicit in the genocide taking place against the Palestinian people.”

Following an angry response by liberal, pro-Israel Jewish organizations who viewed themselves as allies in the struggle against racism, Dream Defenders issued a statement charging them with “conditional” and self-interested support of the struggles of black Americans.

Like Hill and Sarsour, Abuznaid carves out a position that vehemently renounces anti-Semitism and denies desiring the physical destruction of Israel. Yet he makes clear that the future he aspires to does not include a Jewish state in the region.

“The society we are trying to build is one beyond the borders, beyond these security fences, beyond preferential treatment for one kind of people over the other,” he explains. “I don’t think that a movement of Jewish supremacy can vibe with anything related to the type of model of the type of society that we envision in this greater movement we are trying to develop in the United States.”

Echoing that 2016 Dream Defenders statement, Abuznaid has little use for liberal Zionists whose “ethno-nationalism” he sees as incompatible with progressive goals of equality. His views are reminiscent of Sarsour’s position that Zionism is fundamentally incompatible with feminism.

“If you tell me we all deserve a shot at a decent income and decent health care, and our children should have the same opportunities for education – you can’t fundamentally believe that it’s cool here and it’s not cool over there,” he says. “And you also can’t believe that borders and walls and security fences aren’t cool here, but yes, they’re perfectly cool over there.”

Ahmad Abuznaid’s views are seemingly at odds with those of his father, Nabil Abuznaid. The latter is a former aide to Yasser Arafat and was once the PLO’s chargé d’affaires in Washington and, more recently, the Palestinian Authority’s ambassador to the Netherlands. He was involved in the Oslo negotiations and has been viewed by Israelis as a moderate pragmatist.

While declining to discuss his father’s opinions (“He would have to speak for himself”), Ahmad Abuznaid says that “most Palestinians, even those within in the PA, have had to acknowledge that Oslo was an absolute failure.”

He continues: “As a younger child, I thought a two-state solution was the proper way. But [as] I grew up, I started reading more and thinking more critically.” Two states, one of which he believes will never grant true equality to non-Jews or the right of return to Palestinians, “is not respectful, not mindful of equality and justice,” he says.

Unsurprisingly, pro-Israel groups have little positive to say about the one-state, pro-BDS positions of both Ahmad Abuznaid and Dream Defenders, which they view as cleverly spun advocacy for Israel’s destruction and the support of terrorist goals.

He added: “It’s a sick tactic, but it is one deeply ingrained in the anti-Israel movement in the U.S., which has sought to foment and exploit racial tensions long before Ferguson.”

In a report by the Jewish Center for Public Affairs released earlier this month, Dream Defenders is accused of being “intertwined” with the Popular Front for the Liberation of Palestine, and that it “allows PFLP ideology to infiltrate into the United States.” The report adds that the group has “spread the agenda of a designated terror organization, giving legitimacy to an illegitimate entity,” and it highlighted how Abuznaid backed “PFLP terrorists on social media and at various public events.”

Abuznaid, who in late 2016 left his position as Dream Defenders COO for a larger role as director of the Michigan-based National Network for Arab American Communities, calls such charges a “smear,” depressing but unsurprising.

“That’s not new for me. It’s really sad to see, it’s ugly – but it’s something you expect to get when you do this type of work,” he says.