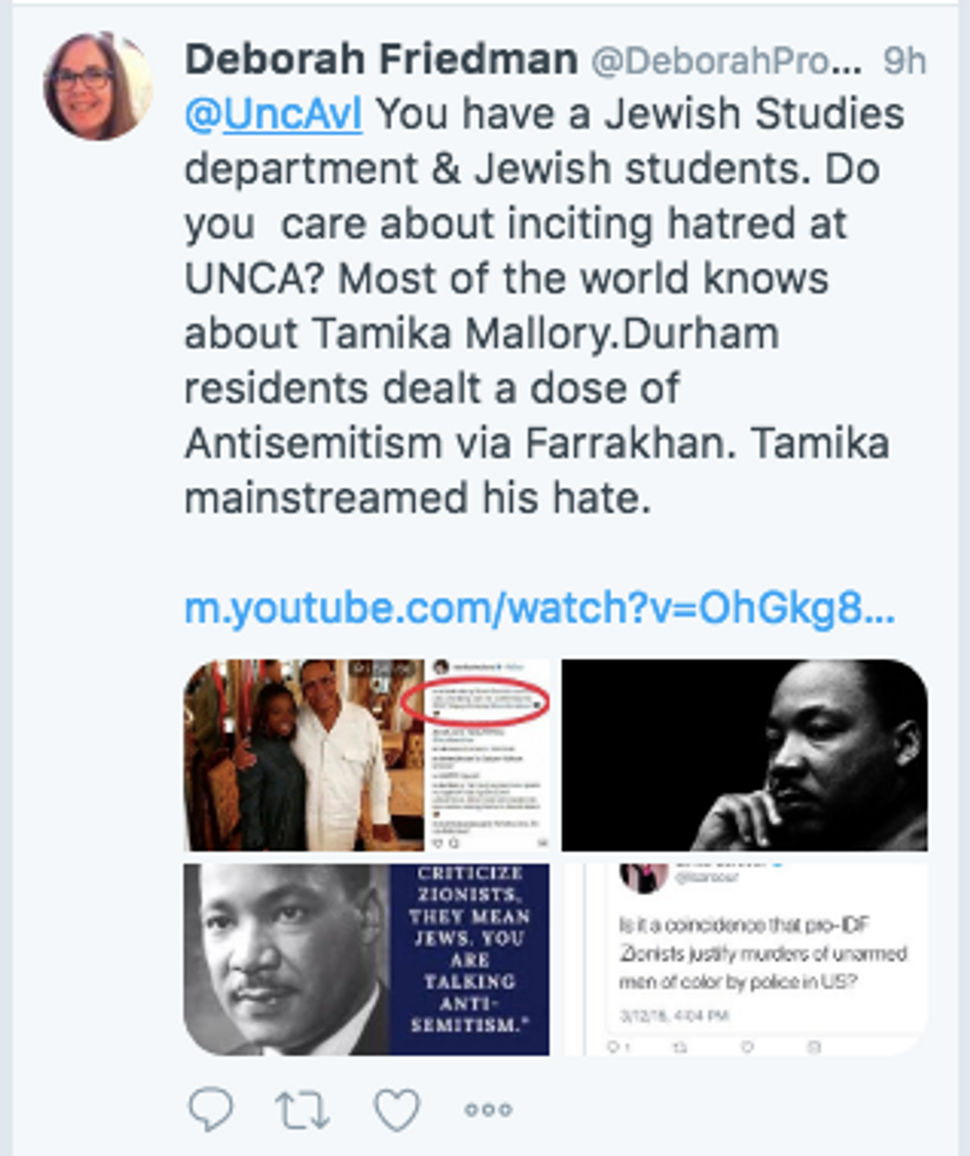 Members of the Jewish community in Asheville, North Carolina are angry that a local university has invited Women’s March co-president Tamika Mallory to be the main speaker for this year’s Martin Luther King Jr. week activities.

“I was greatly dismayed that Dr. King’s legacy would be tainted by having Ms. Mallory, who is a friend of the virulently anti-Semitic leader Louis Farrakhan and the Nation of Islam, give the keynote address at this year’s MLK celebration,” Asheville resident Naomi Friedman told the Forward.

The University of North Carolina at Asheville insists it is working to create educational programming to use Mallory’s scheduled speech as a teachable moment about anti-Semitism and racism, but some say Mallory is a bigot who is being given a platform she doesn’t deserve.

“Dr. King must be spinning in his grave,” Harry Pierson wrote in a letter to the editor of the Asheville Citizen-Times. “King abhorred anti-Semitism, while it is beyond dispute that Mallory is a virulent anti-Semite. Her words and actions leave no doubt.”

Mallory has for nearly a year been criticized for her longstanding associations to Farrakhan, her reluctance to cut ties with him, and her handling of the accusations of anti-Semitism against her and the Women’s March. But she has also been feted for her role in organizing one of the largest protest movements in American history. She did not respond to a request for comment for this story.

Many angry North Carolina residents cited Tablet’s recent investigation of the Women’s March’s first few months, which claimed that Mallory and others had asserted that Jews were responsible for the oppression of black people and had berated a Jewish staffer with remarks like “your people hold all the wealth.”

Mallory and other Women’s March staffers have denied these claims.

UNC Asheville’s announcement of the event says her talk will be “the highlight of a week focusing on King’s moral legacy, including a day of community service, and activities and workshops for students on contemporary issues and civil rights history.”

In a statement on Friday afternoon, university chancellor Nancy J. Cable and interim provost Karin Peterson defended their university’s “commitment to free speech and open dialogue,” and said that they condemn anti-Semitism and that their invitation for Mallory to speak did not imply that they endorsed her.

“Dr. Martin Luther King Jr. worked with diverse and sometimes opposing groups to overcome intolerance and to engage in the difficult yet vital work of the civil rights movement,” the statement noted.

Deborah Friedman (no relation to Naomi Friedman) is a resident of Durham, about three hours away, and the leader of a group called the North Carolina Coalition for Israel. On Twitter, Friedman said she opposed Mallory’s speech because Mallory played a role in “mainstreaming” Farrakhan’s hate. 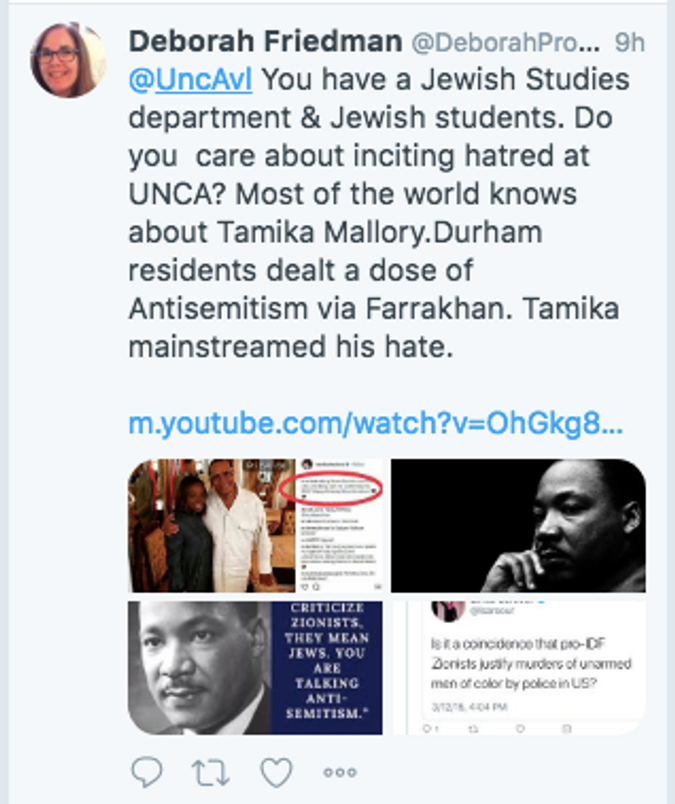 Every Women’s March around the country is legally independent from the national organization co-run by Mallory. Some local marches have decisively broken from the national organization and repeatedly criticized Mallory and her colleagues, while others have chosen to maintain ties with them. Women’s March on Asheville did not respond to a request for comment, but has repeatedly posted in the last few months on its Facebook page that it is independent of the national group and “support[s] diversity, religious freedom and inclusion.”

Asheville, a fast-growing liberal enclave in western North Carolina, has a Jewish community of around 2,000 households, said Rick Chess, the director of the university’s center for Jewish studies. He said the university is aware of the concerns, and has spoken about this with local Jewish leaders and groups.

He added that the university is also setting up a committee of staff, administration and faculty members develop educational programming for later this semester on topics related to Mallory’s visit and the ensuing debate, likely touching on anti-Semitism, black-Jewish relations, and issues of race and gender. The university statement also referred to the school’s plans to “engage in dialogue around the keynote address, as well as many topics emerging from the activities planned for the week.”

“The occasion of Ms. Mallory’s talk is providing the campus and the community with an opportunity to have some potentially meaningful and constructive conversations,” Chess told the Forward. “The university is taking very positive steps in trying to engage in the conversation on campus prior to Ms. Mallory’s visit, and to develop the kind of programming that could be rich and useful, and that is the kind of educational work a liberal arts university should be involved with.”

“To my knowledge, no one wants to stop her from speaking at UNCA,” she wrote in an email. “They simply don’t want a friend or follower of Farrakhan to be associated with the MLK celebration and they feel strongly UNCA should provide context, educational programs on anti-Semitism (both traditional and the new anti-Israel anti-Semitism), and the opportunity to challenge Ms. Mallory, or any controversial speaker, who comes to campus.”

But not everyone is one the same page. A new group called the Center for Combatting Hate in America started on Friday a petition drive to get the university to replace Mallory as the speaker. The group has previously led unsuccessful attempts to get UCLA to stop hosting the Students for Justice in Palestine conference and get Temple University to fire a professor who called for a “free Palestine from the river to the sea.” The UCLA petition got 36,000 signatures.

There would be precedent for revoking Mallory’s invitation to speak. In the past year, a regional chapter of Planned Parenthood, an Australian anti-poverty group and a German think tank have all reversed their decision to have Mallory as a speaker or give her an award because of the anti-Semitism controversies.

On the other hand, Antioch College in Ohio honored Mallory last April with the Coretta Scott King Legacy Award, named after Dr. King’s wife, despite calls for them to reverse their decision as well.