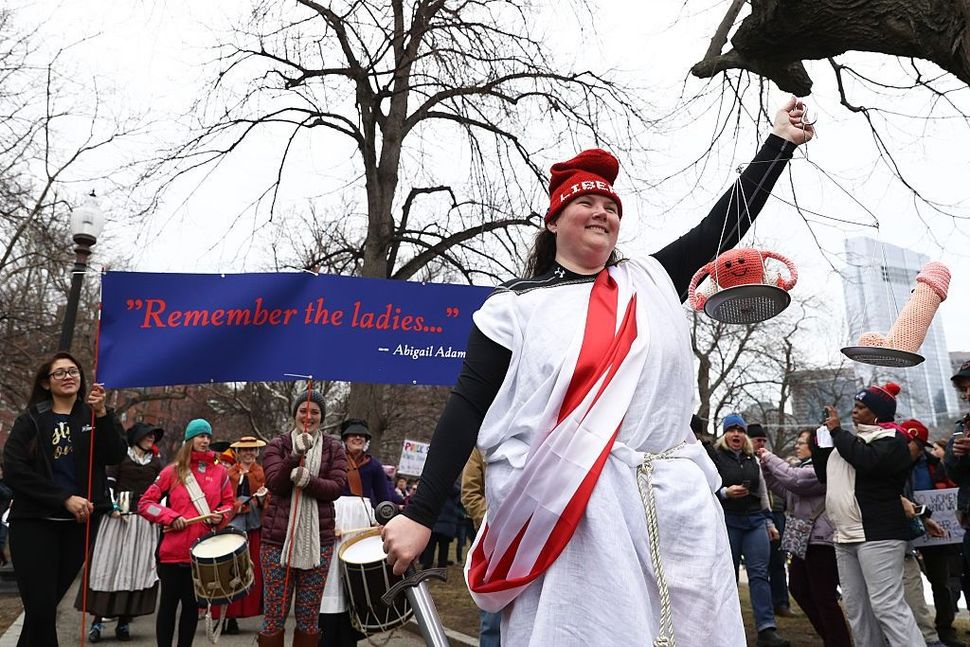 Janis Kenderdine of Tyngsboro, MA leads a colonial band through Boston Common during the Boston Women’s March for America on January 21, 2017 in Boston, Massachusetts. Image by Maddie Meyer/Getty Images

Multiple times over the past year, as leaders of the national Women’s March organizations became embroiled in controversy over their ties to the anti-Semitic Nation of Islam leader Louis Farrakhan, many of the dozens of local Women’s Marches around the country have tried to do damage control.

Some have done so by condemning the national organization and its leaders. Others have stressed that they are and have always been independent entities with little to no connection to the national movement besides a shared name.

WMLA recognizes the power in words and we know how much pain these statements have caused for the Jewish and LGBTQIA+ communities and to you we apologize on behalf of the insensitive and out-of-touch actions of Women’s March, Inc.

During late 2016, as the idea of a “women’s march on Washington” spread virally across social media, local activists around the world organized their own marches to take place the day after Inauguration Day, at the same time as the massive one on the National Mall. These march organizations are all legally distinct entities but were established to ally with what is now known as Women’s March Inc., the group that organized the Washington event and whose leaders include the controversial activists Linda Sarsour and Tamika Mallory.

Two years later, some local march organizations still coordinate their activities with national leadership, while others have gone their own way, with many expressing frustration over what they saw as Women’s March Inc.’s lack of coordination with local groups, not to mention its leaders’ ongoing controversies. In between the annual January marches, local groups have stayed active by helping with a variety of progressive causes, like supporting the March for Our Lives and organizing volunteering during the 2018 midterm campaign.

But according to many local march leaders, most people think their local march is directly tied to Sarsour and Mallory, who have longstanding ties to Farrakhan and who have been criticized for what many saw as conditional or too-slow condemnations of his anti-Semitism and homophobia.

“It is not clear that there are two independent entities,” a leader of Womxn’s March Denver, Angela Astle, told the Forward. After meetings and feedback with the local Jewish community, the group wrote a letter to the editor of the Intermountain Jewish News last week explaining their independence and denouncing anti-Semitism and the national Women’s March leaders’ “failure to promptly disassociate from anti-Semitic public figures.”

And some leaders interviewed by the Forward are concerned that it’s going to affect turnout for their latest round of marches on the weekend of Jan. 19-21.

“Absolutely. It’s something we’re all dealing with,” Karen Cosmas of March Forward Massachusetts told the Forward.

Somewhere between 500,000 and 1 million people attended the 2017 march in Washington, D.C., making it one of the biggest rallies there in decades, according to The Washington Post.

But while Women’s March Inc. leaders rose in national prominence — honored in the TIME 100, given awards by national and international organizations — much of their prestige and power was also drawn from the estimated 2.7-4.2 million who marched at more than 650 other marches across the United States, from around 450,000 in New York City to five people quarantined in a California cancer facility. The second annual Women’s March in January 2018 likely had smaller turnout, but millions of people still marched across the country.

But in February 2018, Mallory attended a Farrakhan rally at which the minister gave her a shout-out, in the same speech in he accused Hollywood Jews of “turning men into women and women into men.” Further reporting revealed that Mallory, Sarsour and fellow co-chair Carmen Perez had years-long ties to Farrakhan. Mallory’s initial response was unapologetic, and the strongest criticism of Farrakhan in the initial Women’s March Inc. statement only said that his words “are not aligned with the Women’s March Unity Principles.” The organization and its leadership took until November to fully denounce Farrakhan’s words and apologize to Jewish and LGBTQ followers.

As a result, a growing number of women, from Jewish activists interviewed by the Forward to actress Alyssa Milano, said that they aren’t going back to their local marches next year – even though that would hurt the advocacy efforts of local organizations that in many cases have spoken out against the national leaders.

Some groups were still unsure if participation would be affected. “There is no way to know anything about turnout until the day of the event,” Women’s March Connecticut – which had previously warned Mallory in a since-deleted tweet that they wouldn’t tolerate “any more anti-Semitism” – told the Forward via Facebook. “Yes, there have been many conversations about the issue on the state level and many serious and appropriate concerns raised by Jewish women. We are planning a forum facilitated by Jewish, Muslim, and Black women leaders to find ways to understand each other and come together” after the January march.

But Cassady Fendlay, the head of communications for Women’s March Inc., told the Forward that she was confident there would be high turnout at the main rally in D.C. and at the more than 130 “sister marches.”

“I believe that we are building an intersectional movement that is bringing women’s voice to the table in a balanced fashion, and is a big tent,” she said.

That sentiment was shared by Lyda Ness-Garcia of Women’s March El Paso, whose logo is a luchadora, a female Mexican wrestler. They got between 1,500 and 2,000 people to march last year and are expecting a similar turnout in January. Ness-Garcia said they considered disaffiliating from Women’s March Inc. — she said, speaking personally, that when it came to anti-Semitism, “the critiques are legitimate” — but decided “there’s an advantage to being part of the larger national movement.”

But even if leaders think that connection is worth preserving, the rank-and-file might not accept it. The top organizer of the Women’s March group in Pittsburgh, Marcy Baton, told the Forward that her ties to national leaders were “a very loose sororal relationship…. I’m informed by their work. A lot of their work is really exciting.” Her group has many Jewish members, and provided logistical support and supplies for the Jewish group Bend the Arc’s protest rally when President Trump visited the Tree of Life synagogue after the massacre there in October.

But on the Facebook event page for next month’s march, the top comment says, “Is this being led by the same national Women’s March organization? If so, as much as I support the reason for the walk, I won’t walk with an organization whose leaders have still yet to denounce anti-Semitism.”

Baton tried to explain that her group was “locally organized,” but another user chimed in, “[Sarsour] has been part of the national movement from the start, though, and the affiliation of the local one is disturbing as a result.”

In addition to marching last January, Women’s March Chicago also held a “March to the Polls” rally in October, which leaders say was attended by 100,000 people. It could be seen as a sort of test case of the effect of the anti-Semitism allegations on Women’s March participation, since it came seven months after the fateful Farrakhan rally that Mallory attended.

Women’s March Chicago outreach coordinator Sara Kurensky said they had worked for months to make clear that they condemn anti-Semitism and were totally independent from the national organization, with which they’re also embroiled in a trademark dispute over the use of the phrase “women’s march.” Because of those efforts, she said, the Farrakhan connection did not hurt their voting march turnout.

“When we meet with Jewish organizations in the city, it’s really gratifying for me to say, ‘Look, that’s not us,’” said Kurensky, who is herself Jewish.