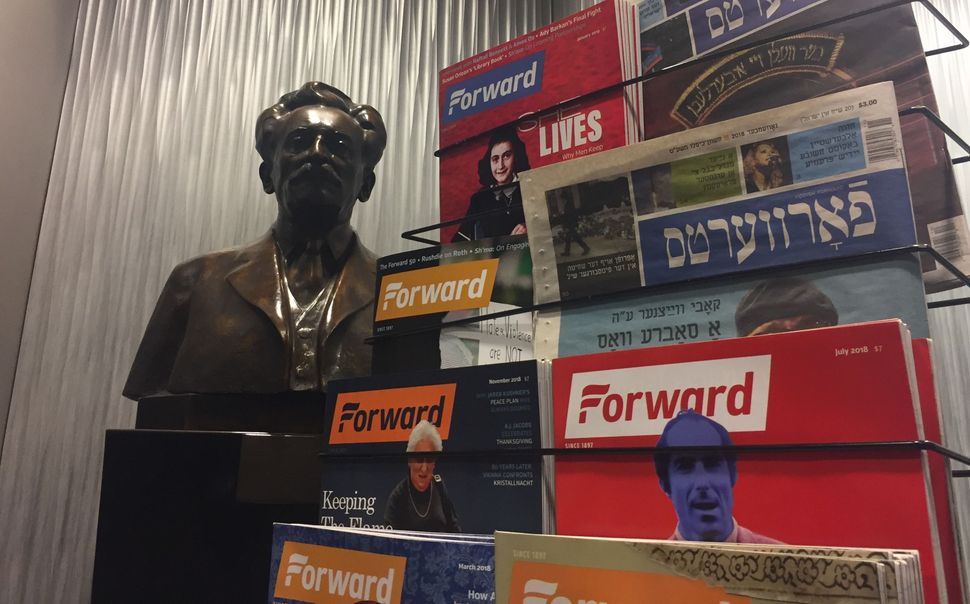 The Forward Association terminated ten employees on Wednesday, including editor-in-chief Jane Eisner and other senior newsroom leaders, while announcing that it will no longer publish print editions of its English magazine and its Yiddish newspaper.

The Forward has published a Yiddish newspaper since 1897, and created its modern English edition in 1990. The remaining staff will continue to produce both Yiddish and English editions online.

“We made some moves that will allow the Forward to survive and thrive for the next 120 years,” the Forward’s publisher, Rachel Fishman Feddersen, said on Thursday. “This move will allow our editorial team to really hone its focus on digital connection and growth with our current readers, and the vast potential readership that’s out there.”

Founded by socialist Jewish immigrants on Manhattan’s Lower East Side, the newspaper was once a dominant local daily in New York City, with a circulation of 250,000 in the 1920s. It built a stately headquarters on East Broadway, and helped form the American Jewish identities of generations of Yiddish-speaking secular Jews.

This week’s cutbacks come after years of financial losses for the Forward Association, the nonprofit that publishes the Forward. The organization lost $4.9 million in 2016, the last year for which financial statements are publicly available. Feddersen said that it lost roughly $4 million in 2018.

The Forward has been focusing on its digital products and scaling back its print publications since 2013, when the Yiddish newspaper switched from a weekly to a biweekly production schedule. The English weekly converted from a broadsheet to a more concise tabloid format in 2015, then into a magazine in 2017.

The English Forward currently has 15,800 paid subscribers, nearly 3,000 of whom have digital-only subscriptions. The Yiddish publication, known as the Forverts, has less than a thousand subscribers. Both print publications will end their runs with a double issue in April.

The Forward’s struggles come amid a rolling crisis in the media industry, spurred by the successive collapse of print and online advertising. Large and small publications have slashed staff and shut down.

Feddersen joined the Forward Association in mid-2016, after a media consulting firm retained by the organization proposed dramatic changes. “When I joined the company I was given two mandates,” she said. “They were to take us digital-first, now digital-only, and to put us on a path to sustainability… These past two and a half years have been a time of learning for me about the kinds of changes we can and can’t make when we think about our mission, why we exist, and the role we play in the Jewish community.”

Under Feddersen, the Forward has switched to a monthly print schedule in English and Yiddish, instituted a pay meter on its website, and grown its online audience. When Feddersen arrived in June of 2016, the Forward’s website had just over one million monthly unique visitors; the Forward’s content reached two million online readers in December of 2018, through its website and the articles it makes available through Apple News. The paper has taken home a handful of journalism awards in recent years, including a 2018 Sigma Delta Chi award for investigative reporting from the Society for Professional Journalists. And in early 2018, the Forward hired a new senior executive, Jay Ehrlich, responsible for digital growth.

The Forward has also made significant staff reductions. “We’ve had to economize along the way,” Feddersen said. “We’ve had layoffs before.” 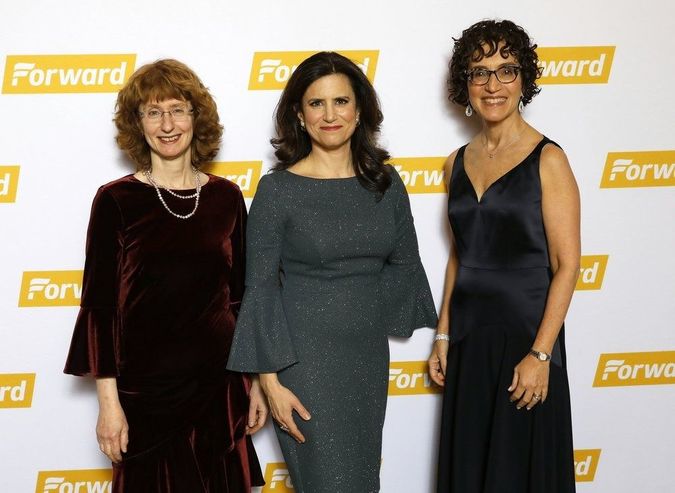 Jane Eisner, right, with Rachel Fishman Feddersen, center, and Rukhl Schaechter, the editor of the Forverts, at the Forward gala honoring Eisner in December. Image by Forward Association

Those layoffs and departures, beginning before Feddersen’s arrival, have cut the staff of the Yiddish paper from seven people to two. On the English side, the Forward terminated a number of editors and writers in 2017 and 2018.

“Even with all of that… it became clear that our expenses were still at a level that were unsustainable,” Feddersen said. “You can’t lose $4 million a year forever.”

The paper sold its Lower East Side headquarters in 1974. In 2003, it sold its radio station for $81 million, according to tax filings. Much of that money has been spent. As of the end of 2017, the Forward’s combined net assets were $37.7 million, according to Feddersen. That includes the value of the floor it owns in an office building in downtown Manhattan.

The Forward received 501(c)(3) status in 2010, and has been raising money from donors for less than a decade. Feddersen said that the Forward hopes to stop losing money by increasing emphasis on fundraising.

“The development department has been more successful every year,” she said. “We’re a brand people have known forever, and never thought they would personally need to support.”

The latest staff changes leave the organization with 27 full-time employees.

Jane Eisner had led the English paper since 2008. Eisner declined to comment for this story. “During more than 10 years as editor in chief, I have embraced visionary, fearless and impactful journalism that served our community with distinction,” she said in a statement to the New York Times. “I was ready to continue to lead The Forward in its next, online phase but the board and publisher chose instead to make substantial personnel changes, including that I will no longer be editor in chief.”

“I have cherished my time at The Forward, which has assembled the very best staff in Jewish journalism,” she said in the statement to the Times. “It’s been an honor to work with them.”

Eisner said that she has not decided what her future role at the Forward will be.

In December, the Forward honored Eisner at its annual gala, awarding her with a “Fearless Women in Journalism Award.”

“Jane is an incredible talent and presence on the Jewish landscape. She is a peerless writer and commentator on the Jewish world,” Feddersen said. “She has done incredible things at the Forward, and we are enormously grateful for the work she’s done. As a digital-only organization, which is what we are now, we need digitally experienced leadership in the top editorial role.”

The Forward will name no interim editor in chief as it seeks a digital editor to lead the newsroom. The remaining English editorial staff is led by Helen Chernikoff, formerly the news editor, and Adam Langer, formerly the culture and magazine editor. The Yiddish editorial staff consists of editor Rukhl Schaechter and staff writer and social media coordinator Jordan Kutzik.

Feddersen said that the organization will offer print subscribers incentives to continue as digital subscribers, likely including a membership program.

“I really believe that this is our opportunity to innovate and connect with our readers where they are, because it changes all the time and so we have to be nimble,” Feddersen said. “Often nonprofits can lag behind cultural change. A media company does not have that luxury today. We need to be as connected and nimble as our readership, so the Forward can continue to fulfill its mission in the best possible way.”

Clarification, January 18, 5:51 p.m.: The third-to-last paragraph now contains more precise language to explain who will next lead the Forward’s newsroom. That person will be a digital editor.