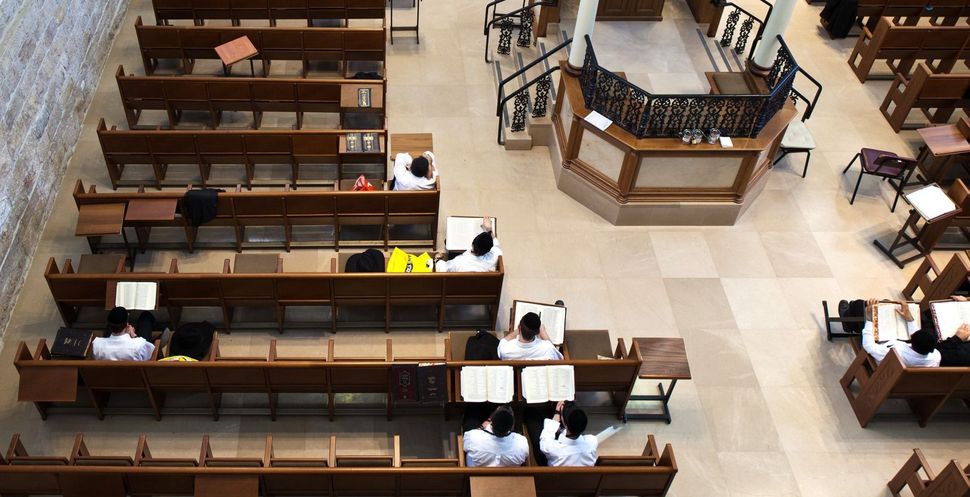 At Temple Sholom, a Reform congregation in Chevy Chase, Maryland, they decided around the middle of last week that they should do something to help congregants furloughed from federal government jobs due to the political impasse over the border wall President Trump wants.

“We looked at each other and said, ‘Okay, this isn’t gonna get any better,’” said Rita Klein, Temple Sholom’s president.

So yesterday, on Day 33 of the shutdown, they hosted a yoga, meditation and social hour, and got 15 furloughed participants. Attendees said the program gave them a chance to learn, socialize and feel supported by their community.

“Those two hours I would have just wasted, probably just aimlessly reading the news feeds on my phone and taking my dog for a walk,” said David Windt, 50, a furloughed public health advisor for the Food and Drug Administration. “At least he appreciates me being around more.”

Temple Sholom is one of several synagogues and yeshivas, or religious schools, that have begun offering special daytime learning and social programming for furloughed government employees, or have seen a shutdown bump in attendane. As the shutdown slouches toward its sixth week, more and more furloughed Jews are turning to Jewish study to quiet their worries and find comfort among their communities.

The D.C. metro area is now home to about 300,000 Jews, according to a 2017 Brandeis study. That makes it roughly tied for the third largest Jewish community in the country, in line with Chicago but behind New York and Los Angeles. The area is also home to the majority of the 800,000 “nonessential” government employees that have been furloughed since the shutdown began on December 22 of last year.

The first class for furloughed congregants offered at Adas Israel, a Conservative synagogue in Washington, D.C., was about the prayer for the country, said Rabbi Sarah Krinsky, an assistant rabbi there. They synagogue has been offering classes nearly every weekday since the fourth week of the shutdown.

Study is a quintessentially Jewish way to give people the means to make their free time more meaningful.

“Part of what Judaism does is give structure to time, and give shape to days, and we could offer that,” Krinsky said.

The prayer for the country, recited across the Jewish spectrum, asks God to not only guide the leaders of the land, but also to inspire them to deal fairly with their Jewish citizens. Krinsky’s class, held last week, brought in 15 adult students, all but one of them on federal furlough.

In the glass-enclosed classroom in Adas Israel, the students took up Krinsky’s source sheet to discuss the prayer. The study session raised the question of whether it’s better to have a bad government or no government at all, which felt very timely, Krinsky said.

“Talking about this prayer helps me verbalize what was going on for me,” said Lara Chausow, 36, a field analyst with US Department of Agriculture’s Food Safety and Inspection Service. She said the prayer is “a reminder to me to think through what am I doing to make things better, even if I can’t do it as my job at the moment.”

Click here to view the study sheet used by Rabbi Krinsky for her class on the prayer for our country.

Ohev Shalom, a Modern Orthodox congregation in D.C., is seeing a bump in attendance at its. mid-day classes. But, its rabbi, Shmuel Herzfeld said in an email, the bump “breaks my heart.”

“In two places in the Torah it states that we must pay our workers on time,” he wrote, pointing to two verses:

Leviticus 19:13: “The wages of a laborer shall not remain with you until morning,” and Deuteronomy 24:15: “Pay [poor hired workers] their wages each day before sunset… Otherwise they may cry to the Lord against you, and you will be guilty of sin.”

The weeknight study events at Home Beis, an independent beit midrash, or study hall, in D.C., have also seen an uptick in attendance since the beginning of the shutdown, despite the cold weather and the holiday weekend, according to Rabbi Zvi Teitelbaum, who helps run the program. Teitelbaum said the students are coming for Home Beis’ Jewish philosophy classes and Talmud study sessions, which are held at Sixth and I, a popular synagogue and event space in D.C.

“The furloughed people, they’re looking for things to do,” he said.

Heidi Lovett, a senior policy analyst with the National Oceanic and Atmospheric Administration’s fisheries service, also attended Temple Sholom’s yoga and meditation luncheon. She says her family is doing okay financially, but may have to start making some difficult decisions if the government doesn’t reopen soon. She has one son in high school, getting ready for college, and another whose bar mitzvah is at the end of the summer.

She said she has been thinking a lot about the concept of tzedakah, or charity — not just giving it, but knowing how to receive it.

“At times you have to step up and accept help,” Lovett said. “That’s why it’s important to give to charities you believe in while you can do it, because sometime the future you might be in need.”

David Windt, of Temple Sholom, said that his synagogue’s programs were primarily a means for him to socialize, something he’s missed since leaving his job over 34 days ago.

“When you’re not allowed to use work email servers and chat functions, you’re basically isolated,” he said.

Though Temple Sholom doesn’t have plans for specific classes it might offer, Windt says he has one idea of what he’d like to learn: how to wrap tefillin, the ritual leather straps worn during weekday morning prayers. He also said that Torah study could liven up his week.

“I have no excuse to not delve into the parsha [weekly Torah portion],” he said. “I have nothing else to do.”